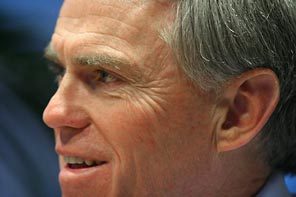 As Washington Mutual has been battered by the nationwide housing slump and attacked by New York's attorney general for allegedly colluding with appraisers, shareholders in the giant Seattle-based thrift have watched their shares lose nearly half their value since mid-October.

Before long, many on Wall Street say, those investors also may see smaller dividend checks.

Over the years, WaMu stockholders have grown accustomed to steadily rising dividend payments. Starting in October 1995, the company increased its payouts for 48 straight quarters — just the kind of steady, reliable track record investors long have expected from bank stocks.

But with its profits ravaged by the housing downturn and the collapse of the subprime mortgage market, WaMu ended that streak in October, holding the quarterly dividend at 56 cents per share.

Several banking analysts say that could be just a prelude to cutting the dividend, perhaps as soon as next month's scheduled WaMu board meeting.

"Investors clearly don't believe that it's sustainable," said Frederick Cannon, a banking analyst for Keefe, Bruyette & Woods in San Francisco. He and other WaMu watchers say the company might be better off slicing its dividend and using the savings to strengthen its capital base or buy back stock.

A few other mortgage-industry players already have trimmed their dividend to conserve capital as they struggle to assess just how many of the loans on their books are likely to go bad.

Though investors usually punish companies that cut their dividend, WaMu and other financial stocks face so many other troubles — and have been beaten down so much already — that a cut could be viewed as part of a turnaround plan.

For most investors he's spoken with, Cannon said, "the major concern isn't the dividend, but the ability of WaMu to withstand significantly higher credit costs going forward."

WaMu's tanking share price has caused its dividend yield — the annual dividend payment divided by the current stock price — to soar. In fact, WaMu has by far the highest dividend yield of 33 major banks, thrifts and mortgage lenders analyzed by The Seattle Times: 11.5 percent as of Friday.

By contrast, the average yield for dividend-paying banks is about 2.8 percent, said Jim Bradshaw, banking analyst for D.A. Davidson in suburban Portland. A yield above 4 percent, he said, usually means either the bank's growth has stalled or investors doubt the dividend level can be sustained.

WaMu continues to stand by comments made by Chief Executive Kerry Killinger in an October conference call with analysts. He told them that, while the final decision rests with the board, of all potential uses of the bank's capital, "I would put at the top of the priority list the cash dividend for our shareholders, who will continue to view that highly."

At the current rate, WaMu's dividend costs the company nearly $480 million each quarter, or $1.92 billion a year. That money, Cannon said, could be used instead to bolster WaMu's balance sheet against the rising tide of bad loans.

Bradshaw suggested that using the money to buy back stock would support the share price more than paying it out as a dividend. At the current stock price of around $19.50, WaMu could buy back more than 98 million shares — 11.5 percent of all the shares outstanding — with a year's worth of dividends.

Since WaMu earned just $186 million in profit last quarter, it had to tap its cash reserves in order to make the dividend payments — another warning that the dividend might be in trouble. On average, analysts following WaMu expect it to earn only about $230 million in the current quarter, according to Thomson Financial.

Of the 33 financial-services companies analyzed by The Seattle Times, only 25 posted a profit in the third quarter. Of those 25, WaMu's coverage ratio — earnings per share divided by the quarterly dividend — ranked dead last, at just 0.36; the average for the whole group was 1.9. As a general rule, a company's dividend starts to look shaky when its coverage ratio falls below 1.5.

Despite the company's position as one of the nation's biggest home lenders, WaMu shares underperformed other banks and mortgage companies during the housing boom of the past several years. Especially for investors who bought WaMu after it topped out in November 2003, the dividend payments constituted the greater part of their return.

Companies generally are loath to cut their dividends because investors come to count on the payments, and those expectations are incorporated into the stock price.

Citigroup, for instance, agreed to pay 11 percent interest on the $7.5 billion of convertible shares it sold to the Abu Dhabi Investment Authority last week — money it will use, in part, to pay its 54-cents-a-share dividend, which Chairman Robert Rubin has pledged to protect.

But this past Tuesday, Freddie Mac, the huge government-sponsored mortgage buyer, said it was halving its 50-cent quarterly dividend. IndyMac Bancorp, a big California-based mortgage lender, did the same thing on Nov. 6. And mortgage insurer MGIC Investment has whacked its dividend from 25 cents a quarter to 2.5 cents.

Cannon noted that even if WaMu cut its dividend in half, to 28 cents a quarter or $1.12 a year, that would still give it an above-average dividend yield of 6.2 percent.

Not everyone is willing to put WaMu's dividend on the endangered list just yet. Erin Swanson, an analyst for Morningstar in Chicago, said that for the time being, at least, the company can continue paying the dividend and remain well-capitalized, though that could change if WaMu's exposure to busted subprime mortgages and other bad loans gets significantly worse.

"For now, they do have that [capital] cushion built in," Swanson said. "If you see that start to compress, cutting the dividend would be a way to preserve capital, but I don't think they need to do that now."

But Credit Suisse mortgage-industry analyst Moshe Orenbuch wrote in a recent research note that he expects WaMu to slice its total dividend from $2.21 this year to $1.25 in 2008.

And Paul Miller, who follows WaMu for FBR Capital Markets in Arlington, Va., went even further: In a Nov. 8 note to clients, Miller said WaMu probably will cut its dividend next year to 80 cents, or 20 cents a quarter.

But, he wrote, if the company has to set aside even more money for bad loans than the $4.9 billion Miller predicts, "we could see the dividend cut to zero."