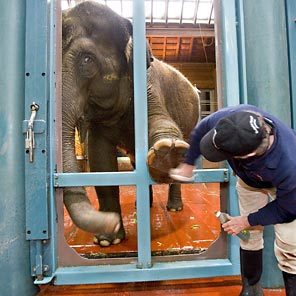 The hippos are crashed out in their pen like the aftermath of a Saturday kegger, bulbous brown waterbed mattresses trailing little curls of legs. Nothing stirs them — not the loud exchanges between visitors, not the crackling of a walkie-talkie and definitely not the beckoning of the human alarm clock.

At last, Guadalupe, 7, and Waterlily, 29, lift their heads and roll onto their feet, ready to lumber out into their manufactured world at Seattle's Woodland Park Zoo. Gertrude, though, is the last to move. At 44, she's Woodland Park's oldest animal, and she's earned her place in the hierarchy.

And like other elderly zoo animals, she faces her share of health problems: Her eyes are getting opaque, plus she's a wee bit heavy. "She needs to lose a few," Farnham says. As in a few hundred, she means.

Many of Woodland Park's animals are in, or about to enter, senioritis. At 32,"Our zebra, Amy, is about to enter her golden years," says zoo veterinarian Kelly Helmick. There's also Jake, a 16-year-old African lion; Pez, a 25-year-old Humboldt penguin; Pete, a 39-year-old gorilla; and twins Towan and Chinta, a pair of 40-year-old orangutans.

What constitutes "elderly" varies from animal to animal. At 40, Bamboo, one of the zoo's Asian elephants, is nearing her expected life span, while Sukari, a 25-year-old giraffe euthanized in September, enjoyed longevity unmatched by most of her peers. But, "When you're 25 years old and a giraffe," notes zoo animal curator Martin Ramirez, "things start to fall apart."

In the wild, these animals would face fierce weather conditions, predators and unpredictable dangers. But in the relative safety of captivity, they're keeping their keepers challenged with the health issues of old age.

Each species comes with its own problems, whether it's arthritis, weight gain or vision loss. Waterfowl are prone to cataracts. Wolves and foxes get certain cancers. And after years of leaf-munching, herbivores have to worry about dental wear. In short, it's the breaking down of an aging body, from the heart and kidneys to the skeletal and digestive systems. Just like people.

In the hippo pen, Gertie rumbles up and over, resting the base of her spiny, shovelly snout atop the sturdy metal gate separating keeper from animal. Hippos are Africa's most dangerous animals, able to move faster than their squishy, Michelin-Man bodies would indicate. She opens her big jaws wide, and Farnham volleys a succession of apples and carrots inside.

"Good girl, Gertie," she says. "Take this one, too." Yes, it's the old hollowed-out apple trick, this one filled with a pasty glucosamine mix that she would otherwise spit out, a health supplement to help aging joints. Gertie compliantly chews it into a mealy mush.

Bamboo, the zoo's senior Asian elephant, is getting her morning bath, one good hose-spraying with every 90-degree turn. She seems bored as she holds her rear foot up behind her, presenting its soft leathery base for scrubbing.

Keepers are on the front lines. They know their animals the way you know your dog or cat, sensing slight mood shifts or behavioral differences in animals programmed not to exhibit weakness in the wild, whether it's a limp or something as simple as watery eyes.

"Animals that are prey for other animals are very good about masking that," curator Ramirez says. "A good keeper is able to see those subtle differences."

So while her morning ritual might be old hat for Bamboo, it's important for her keepers, allowing them to see changes in health or behavior. Once a year, Bamboo and the other elephants — Chai, a younger Asian elephant, and Watoto, a 38-year-old African elephant — undergo full physicals.

Some animals are checked annually; others, like gorillas, every five or six years. Riskier exams requiring the use of anesthetic are done less frequently, and "some we never really get our hands on," says interim associate veterinarian John Ochsenreiter.

Keepers can't really feel the inside of an elephant's body cavity, but elephants are trained to let keepers draw blood through their relatively thin ears. Hippos, on the other hand, are virtually impossible. Says Bruce Upchurch, another Woodland Park curator: "It's really hard to get blood out of a hippo."

As with Bamboo, animals such as hippos, gorillas and giraffes are taught certain behaviors early on to facilitate treatment and examination. Some learn to lie down, to roll over, to not mind the light poke of a paper clip so there's no trouble when it comes time to actually draw blood or administer injections. Other animals are total pushovers. "Tapirs like to be scratched," Ochsenreiter says. "They'll lie down if you scratch."

As they get older, accommodations are made. Heated pads and rocks are installed for lions and hippos to alleviate the arthritis fired up by cold weather. Hay is dampened to help old herbivores chew. Perches and ropes are flattened and thickened for aging monkeys and tree kangaroos, whose kung-fu grip just ain't what it used to be. "You can't leave them on the ground," Ochsenreiter says. "They're born to be happy in the trees."

But dispositions change. Playful youngsters become sedentary and serious old-timers. "Like people," Ochsenreiter says. Watoto, the 38-year-old elephant, he says, is "getting cantankerous."

Eventually, they die. This year, the zoo has lost several — a patas monkey, a Burmese python and Sukari the giraffe.

Sukari was in bad shape. She had bad gums and chronic arthritis in her feet and lower legs. It was an old injury in her front left leg that troubled her most, and zoo staff outfitted her sleep area with aqua-cushioning often used by cattle farms.

"These are waterbeds made for cows, but this is [for] the equivalent of six cows," keeper Jim McNeal says as he steps along the array of poofy black rectangles, remembering the old giraffe. "She used it religiously."

For a long time, keepers were able to manage her pain with anti-inflammatories, but her stiffness and lameness worsened considerably in September. Though she didn't seem to be in any outward discomfort, she avoided putting any weight on the leg at all. "At that point, it wasn't fair to keep her going," Ochsenreiter says. "... She was just dropping to the ground."

Surgery would have been a technically demanding procedure even for an otherwise healthy animal. A ton of living beast atop four spindly legs is a delicate machine.

So when the time came, they prodded Sukari into the tall squeeze chute where they'd trained her to enter so many times before, the place she'd enjoyed her pre-bedtime meals and where keepers could examine her from above or below. She was a shy animal, but it was something she'd become good at, and she walked right in.

Keepers placed supporting material underneath so she wouldn't just fall to the ground, then anesthetized her. Then, an injection of euthanizing solution. She expired rapidly.

The giraffe would be missed, the zoo said in a statement, but it likely wasn't by other giraffes. As Ochsenreiter says, animals generally preyed upon in the wild have little time to mourn. No eulogies, no reminiscing over old photos, which might be one thing that separates us from the zoo animals. Out on the African savanna — even a fabricated one — life just moves on. 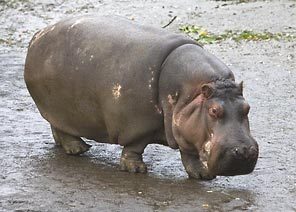 At 44, she's the zoo's oldest resident, but Gertrude the hippo still enjoys her morning stroll. (MIKE SIEGEL / THE SEATTLE TIMES) 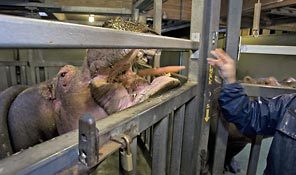 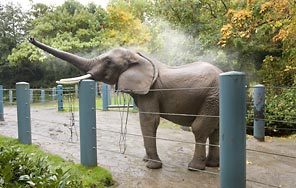 Steam rises off Watoto's back on a chilly morning after the 38-year-old African elephant has a bath. (MIKE SIEGEL / THE SEATTLE TIMES)

Asian elephant Bamboo, age 40 with a life expectancy 45 (in wild and in zoos)

African elephant Watoto, age 38 with a life expectancy 45 (in wild and in zoos)

Colobus monkeys Pokey and Lambchop, both age 22 with a life expectancy Up to 20 in wild, 30 in zoos

Humboldt penguin Pez, age 25 with a life expectancy 20 in wild, up to 30 in zoos