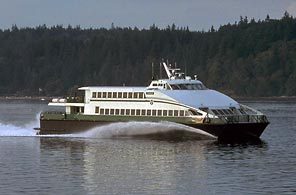 The state plans to put its two mothballed passenger ferries on the online auction site eBay at the end of the month, hoping to fetch nearly $9 million for the two boats, the Chinook and the Snohomish.

Ferry Director Mike Anderson said there will not be a buy-it-now option on the sale, and if no one buys them on eBay, the state will hire a marine broker to sell them.

When the Legislature decided to get out of the foot-ferry business, it ordered the ferry system to sell the two boats, with the proceeds going to counties to help start up passenger-ferry service.

At least two governments are interested: King County, which this week voted to increase property taxes to pick up the Vashon Island passenger-ferry route and others, and the Port of Kingston, which wants to restore foot-ferry service between Kingston and Seattle.

The ferry system was going to put them on eBay next week but decided to wait until after Thanksgiving to coincide with magazine ads the state plans to place on the two boats.

This is the second time the state has sold a ferry on eBay. In 2003, after just three days on the eBay auction block, the ferry Tyee was sold to a Florida boat broker for $560,000.

The winning bidder was Fred Gatchell, who owns Captain Fred's Marine Service in Cape Canaveral, Fla. He resold it to a local group for $750,000, which renamed it the Aqua Express and operated it between Kingston and Seattle until October 2005.

The Chinook and Snohomish operated a passenger-ferry route between Bremerton and Seattle, until the state pulled out of that route. The Chinook was built in 1998, the Snohomish in 1999. Each carried 350 passengers.

Each boat has been assessed at $4.5 million, which is what the state is hoping to fetch on eBay.

All eBay listings are limited to 10 days, but the ferry system said it may have to relist it a second or third time, especially if a buyer wants to see the boats.

The Snohomish, pictured here and the Chinook are now sitting at the Washington State Ferry Eagle Harbor maintenance yard on Bainbridge Island. They haven't operated since 2003. (WASHINGTON STATE FERRIES)