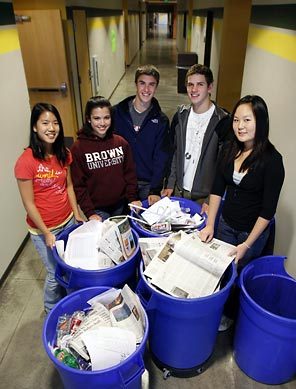 Science teacher Mike Town and his students are working to lower Redmond High School's carbon emissions, one classroom at a time.

Last year, their campaign reduced the school's carbon footprint by 72 tons and saved the school about $7,500 in its electric bill alone.

But that's just the start of the Lake Washington School District's savings from going green.

The district has tallied $550,000 in savings over the past 2-½ years by recycling more, watering less, reducing waste and generally using less energy, according to the district's resource-conservation manager.

A few miles south, the Issaquah School District credits its recycling and conservation efforts with saving more than $500,000 in recent years.

Both districts are part of King County's "Green Schools" program. Lake Washington recently was honored by the county's Department of Natural Resources and Parks for its recycling and energy-conservation practices, and a similar presentation is scheduled for Issaquah in December, said Dale Alekel, who oversees the county's program.

As part of the program, King County sends a team to each school or district to do a "waste walk-through," assessing what is being thrown out. The team then helps schools set up waste-reduction strategies and create a recycling committee.

"We don't want them to be dependent on our assistance," Alekel said. "We give them tools so they can be sustainable over the long haul."

The Federal Way, Auburn and Northshore districts and individual schools in Bellevue, Renton and Snoqualmie Valley also have worked with the program.

Many districts are taking their commitment to green a step further by working with consultants to lower energy and trash bills.

"Saving money is the driver" behind hiring consultants and launching green-school programs, said Chuck Collins, a resource-conservation manager for Lake Washington. "But now a lot of schools and private organizations want to be more 'green.' That phrase means something now. They want to do the right thing."

Collins' position with the district is funded through a Puget Sound Energy program to lower consumption of its largest utility users.

Utility costs can cause a school districts to bleed money in so many ways, said John Macartney, resource-conservation manager and consultant for the Issaquah district.

"Equipment is always malfunctioning, and things get reset. If no one is paying attention, a school can go through 10,000 gallons of water. I look at the bills, and if something gets out of whack, I see what the problem is," Macartney said.

In the Lake Washington district, Collins said his efforts have helped reduce energy consumption by 9 percent. Energy rates have increased every year, so the reduction didn't trim costs, but it did keep the district's energy bills from increasing exorbitantly, he said.

If the district hadn't conserved, and it was still using the same amount of energy it used in 2002, its energy bill would be $850,000 more than it is now, Collins said.

Some student- and teacher-driven green efforts also are proving effective.

Teacher Mike Town and a group of Redmond High students launched a conservation program last year dubbed "Cool Schools." The program's goal was to reduce carbon emissions by 1,000 pounds per classroom. Students did energy audits and worked with teachers and fellow teens on how to decrease consumption and increase recycling.

This year, the program is upping the challenge to 2,000 pounds per classroom. And, with the district's blessing, the student auditors are taking the program to other district schools.

"It's nice to be taken seriously by the teachers we audit," said Laura Wang, 17, who is Cool Schools student auditor. "We're a lot more sure of what we're doing this year, and we can make more convincing arguments when talking to people about how it works."

Puget Sound Clean Air Agency is interested in launching Cool Schools in other districts in the area, said Collins, who worked with Town on getting the program started.

Not only are the students doing right by the environment, but they are learning job skills, Collins said.