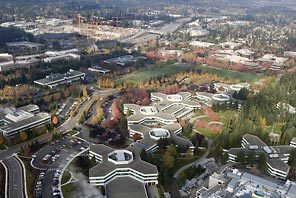 Microsoft owns many of the buildings visible in this aerial view of its campus, which illustrates its past &#8212; the X-shaped buildings, foreground, some built more than 20 years ago &#8212; and its future: On the other side of Highway 520, tower cranes stand over new construction. (MIKE SIEGEL / THE SEATTLE TIMES)
By Benjamin J. Romano
Seattle Times technology reporter

Every weekday, the population of a small city migrates from around the region to Microsoft's headquarters in Redmond.

They work in more than 70 buildings spread out on both sides of Highway 520 for a mile. The 388-acre corporate campus, one of the world's largest, consumes enough electricity to light some 50,000 homes.

But it's not big enough for the giant software company. Not yet.

Today, a half-dozen construction cranes and swarms of workers are carving out a major addition to the campus. This biggest growth spurt in company history will ease crowding and usher in a new design scheme meant to improve how employees work.

It's a long way from the little office next to a vacuum-cleaner-repair shop in Albuquerque, N.M., where Bill Gates and Paul Allen started Microsoft more than 30 years ago. The new campus on the west side of 520 will include nature-themed buildings clustered around a sports field and central commons with restaurants and other amenities meant to help the company compete for highly skilled employees against the likes of Google.

Inside, the new building layouts emphasize flexible, shared space for collaboration and access to natural light.

First outlined in 2005, the expansion takes shape Monday with the opening of Building 99, headquarters for Microsoft Research. Through a combination of new construction and the purchase of existing buildings, the company aims to add about two Columbia Centers' worth of office space, expanding the campus by a third through 2009.

It's enough room for 12,000 workers, but won't necessarily mean 12,000 new hires. Many employees are doubled up in what were meant to be personal offices — conditions that have turned a famous company perk into a drag on morale. Others are scattered among satellite offices elsewhere on the Eastside.

The campus expansion effort will cost the company about $1 billion.

"It's a lot of people. It's a lot of space. It's a lot of money," says Chris Owens, Microsoft's head of real estate and facilities, as he sits in a glass-walled conference room looking down on a large, sunlit atrium in the center of Building 99.

Despite equally staggering investments in Shanghai, Beijing, Hyderabad in India and sites around Europe, this expansion signals the company's commitment to its current home.

And, after a series of organizational shake-ups, Microsoft appears to have stabilized into major divisions centered generally on its three best-known products: Windows, Office and Xbox. The campus layout will eventually reflect that corporate structure, starting with the Entertainment and Devices Division, which will make its home on the new west campus.

A beginning with a backup plan

Jon Runstad, whose firm Wright Runstad developed the original six buildings of Microsoft's Redmond campus in 1986 on land that was going to be a shopping center, has a unique vantage point from which to view the company's growth. It wasn't always such a sure thing.

The firm helped arrange financing for the first buildings, which were designed so that if Microsoft failed, the space could be broken up among multiple tenants, Runstad says.

With fewer than 800 employees, Microsoft moved down the freeway from its original Northwest home, Bellevue, to the Redmond campus a couple of weeks before its stock went public March 13, 1986. "Microsoft is so ever-present in our lives, and such a huge force in our local economy," Runstad says. "... That really happened over a relatively short period of time."

"They've got too much invested in the area to just up and leave anytime in the near future," says Jacobson, a retiree who sold his house near the main campus to a Microsoft employee earlier this year for about $80,000 more than he was expecting. "I attribute that directly to Microsoft being so close."

Despite its rapid growth in Redmond during the past two decades, Microsoft didn't have a master plan for its campus until four years ago.

"We never knew where we were going, how big we would get," says Owens, the facilities head.

Buildings popped up in clusters, usually two or three at a time, but they often felt like islands separated by traffic or other impediments.

Hiring slowed in 2000 and real-estate planners had a chance to catch their breath, Owens says.

After a temporary ban on new office construction in the Overlake neighborhood and increasing scarcity of available land, Microsoft looked for an outlet. The company picked up 150 acres in Issaquah, but executives worried about splitting off a major satellite campus.

In recent years, several factors pointed the company back to Redmond.

It purchased land and buildings from other Puget Sound corporate icons in the neighborhood, including Safeco, Eddie Bauer and Nintendo. Microsoft gained enough raw land for more than a million square feet of development capacity beyond the current expansion.

In 2005, the company negotiated a 20-year development agreement with the city that eased the way for campus expansion. When the west campus is complete, Microsoft will have used up more than half of the new space contemplated in that agreement.

"Turned out we had to go very fast," says Owens, himself a Redmond city planner before coming to the company in 1995.

In a nod to the biggest complaint about growth in the Overlake area — traffic — the current agreement has Microsoft spending $35 million on improvements to local roads and sewer systems, including a new bridge over Highway 520 that would connect the main and west campuses.

Earlier projects such as the Northeast 40th Street interchange with 520, funded in part by Microsoft and other Overlake employers, and efforts to get more people to take the bus or car pool to campus, have essentially kept the congestion status quo even as the campus grew, says Hank Myers, a Redmond city councilman and private transportation planner. He contracted with Microsoft on commute-trip-reduction efforts from 1999 to 2003.

Still, "for three or four hours a day and particularly on Friday, it's hell," says Myers, who lives in the Overlake neighborhood.

Microsoft has been sprinting to accommodate a local work force that has grown 83 percent since 2000 to 35,510 on June 30 this year in the Puget Sound region (about 79,000 work for the company worldwide). Combined with temporary workers, vendors and support staff, the daytime population of the Redmond campus is between 45,000 and 50,000 people, Owens says.

Employment growth outpaced building capacity, and many workers across campus found themselves stationed in nooks and crannies, and circling lots looking for parking. At one point recently, some 9,000 workers were sharing offices.

"There was a lot of disgruntlement when people were moved to share an office," says Criddle, who had a private office, but left to focus on Internet child safety. "Many people just said, 'All right, you know what, it's time to leave. I'm not sharing an office.' "

Meanwhile, Microsoft has been facing its stiffest competition yet for talent.

Locked in a battle with Google, Microsoft suffered from comparisons with the Internet giant's Mountain View, Calif., Googleplex. Its gourmet cafeterias and college-campuslike amenities were featured prominently in a Fortune magazine story this year that ranked Google the best company to work for in America. Microsoft ranked 50th.

The current expansion — along with huge new leases in Bellevue and a parallel project to remake interiors of Microsoft buildings around the globe — is part of a long-term effort to keep the company competitive in recruiting.

"We went for a long time building a one-size-fits-all solution where we were just trying to crank out space to keep up with company growth," Owens says. Now, Microsoft is using real-estate development "much more strategically."

In drafting a master plan for the campus, Owens visited other iconic corporate headquarters, including Nike in Beaverton, Ore., and DreamWorks in Burbank, Calif.

"Nike's famous for how much they have done branding as part of their campus," he says. "And we'd love to incorporate some of their kinds of strategies."

The Microsoft campus will feature more prominent branding, including signs and color palettes representing both the broader company and individual teams.

One new west campus building will have a "coastal" theme; others' themes include "mountains," "meadow" and "forest."

"That is important in our local culture, that people do connect pretty heavily to the outdoors," Owens says.

Microsoft is trying to organize the Redmond campus around hubs for each of its major divisions, which themselves have different cultures.

The majority of the development west of Highway 520 (which runs north-south through Overlake) will be the "uber-campus" of the consumer-focused Entertainment and Devices Division, Owens says. That group is responsible for products such as the Xbox 360, Zune digital-media player and Windows Media Center.

Owens would not say where the other two divisions would be centered.

Anonymous blogger Mini-Microsoft, who writes about the mood of the company's employees, described the different Microsoft cultures this way in a recent post: "There can be the Yawnville Microsoft for stable, IT-driven software products. And there can be a crazy, rule-breakin' bass-thumpin' tat-covered Bartown Microsoft for the entertainment side."

In fact, one possible feature of the commons buildings that will anchor the west campus is a pub. That's still under consideration, a spokesman said.

There's also a minispa, bank and Whole Foods-style food court, along with several other international-themed restaurants, according to drawings from Callison Architecture.

Other prominent elements slated for the west campus include Microsoft Research, in Building 99; human resources in the former Eddie Bauer headquarters; and a relocated company store, museum and visitors center.

The new construction will sit atop a cavernous underground parking garage capable of holding 5,000 cars. It's billed as one of the biggest in the country.

Eventually, there will be nearly as much development west of 520 as there is to the east, and the commons and the Campus Green — a field for soccer, cricket, concerts and other events — could become focal points for the entire campus.

The expansion promises to shift what has long been Microsoft's center of gravity.

"The main campus ... was the mother ship and going across the freeway was being an outcast almost at times," Owens says. "So the collective psychology has changed quite a bit in the last 10 years on that." 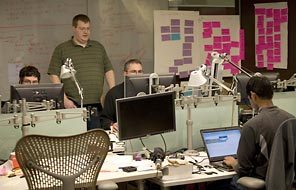 From left: Glen Block, Michael Puleio, Blaine Wastell and Terrence Cyril work in a new "team room" at Microsoft in Redmond. Besides adding 3.1 million square feet to its campus, Microsoft is taking a new approach to interiors, focusing on flexible space to improve collaboration. (JOSH NASH / THE SEATTLE TIMES) 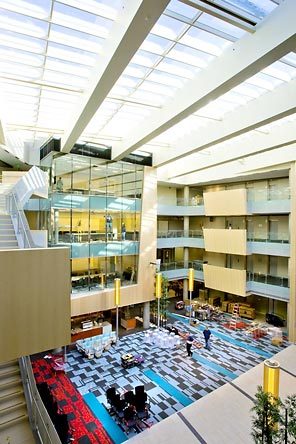 Building 99, which opens Monday, is the first of the new buildings to be completed. It is home to Microsoft Research and illustrates the new focus of the company's expansion: bright, open spaces. (MIKE SIEGEL / THE SEATTLE TIMES) 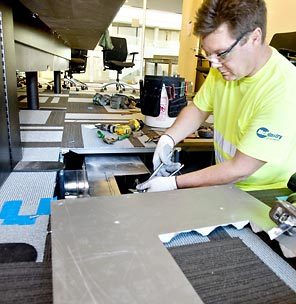 Terry Walker with the McKinstry Company works on ducting under the floor of Building 99. Microsoft is changing its workspace philosophy from the ground up at the same time it is growing. (MIKE SIEGEL / THE SEATTLE TIMES) 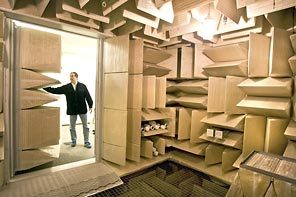