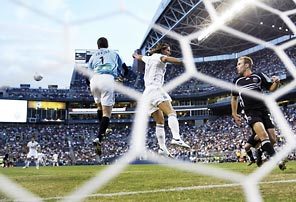 Jimmy Gabriel, one of the pioneers of pro soccer in Seattle, was elated by Friday's news that Major League Soccer is coming to Seattle in 2009.

"The city of Seattle will be buzzing," said Gabriel, the Seattle Sounders' first captain when they played here in the 1970s.

That's the hope of the 12-year-old MLS, which confirmed Friday that Seattle has been awarded an expansion franchise that will begin play in two years at Qwest Field.

"There is no doubt in our mind the market exists for a successful MLS team in Seattle," said Dan Courtemanche, league senior vice president.

And it's also the hope of the new ownership group, which according to sources now includes comedian Drew Carey, an admitted soccer fanatic. The remainder of the ownership group will comprise Sounders owner Adrian Hanauer, Hollywood executive Joe Roth and Seahawks owner Paul Allen.

The official announcement of Seattle's new team will come Tuesday in a news conference to be attended by Don Garber, the MLS commissioner. He oversees the top professional soccer league in the U.S. and Canada, which currently has teams in 13 cities. It will expand to 16 teams, with San Jose in 2008 and potentially Philadelphia or St. Louis joining Seattle as the newbies in 2009.

Still unclear is the future of the current Seattle Sounders, who play in the United Soccer League, the strongest U.S. professional league below the MLS. The Sounders recently won their fourth USL championship.

According to Robin Waite, a member of the Sounders' ownership group, no decision has been made. But the working plan, he said, is for the Sounders to continue to field a team in Seattle in 2008.

"That would make sense, because that way they could retain soccer interest," he said.

When the MLS opens its new franchise in Seattle in April 2009, Waite is interested in moving the Sounders' franchise to Kitsap County. Waite, who lives in Tracyton, said he has purchased land in Poulsbo and is working toward building a 6,000-or-so-seat stadium.

Hanauer, who has ownership in both the Sounders and the new franchise, declined to discuss the specifics of Tuesday's formal announcement: "I'm looking forward to it. I don't anticipate eggs and tomatoes being thrown. ... There's been a lot of work going on behind scenes to get to the point of having a press conference."

Yet to be decided is whether the new MLS team will be called the Sounders.

"The Sounders name has value, but on the other end of that, lately it has been associated with a Division 2 team," Waite said. "I don't know if they want to rebrand or not. They tried that in San Jose and then went back to their original name."

The San Jose franchise paid an expansion fee of $20 million to join the league next season. That's twice the $10 million paid by the Toronto franchise that joined MLS in 2007 and played to capacity crowds this season.

The Seattle franchise, according to sources, will pay a $30 million expansion fee. The trebling of expansion fees from Toronto to Seattle is seen as a sign that the once-struggling league will reach its goal of profitability by 2010. Certainly, the signing of English superstar David Beckham by the Los Angeles Galaxy this past season gave the MLS a huge boost.

It now has television agreements with four networks — Disney (which includes ESPN and ABC), Fox (through the Fox soccer channel), Univision, and HD Net. The MLS championship game, to be played Nov. 18, will be telecast on ABC.

Boosted by the presence of Beckham, attendance in the league increased by 10 percent this season. With Paul Allen aboard, MLS now has at least four billionaires among its owners — Allen, Philip Anschutz, Stan Kroenke and Robert Kraft — and recently forged a major sponsorship deal with Adidas.

"We believe 2007 was the best season ever for professional soccer in this country," Courtemanche said.

The new Seattle franchise will play on FieldTurf at Qwest. It will be stocked with players from an expansion draft, with each existing team able to protect a certain number of their players. The draft for the San Jose franchise will be Nov. 28, and it is likely the draft to stock the Seattle team will occur next November, right after the championship game.

The MLS has a salary cap of approximately $2.1 million, but last year added the so-called "Beckham rule," which allows each team to sign one player outside the salary cap.

Alan Hinton, a former Sounders coach with a long involvement in professional soccer here, believes it will be important to add some familiar names to fans.

"If they have some name players that this city recognizes immediately, I think it could be a bonanza," Hinton said. "But the players who come here have to want to come, and settle into the lifestyle.

"If the owners do their homework right, I'm sure they'll be successful. I truly believe that. I'm so excited. This is exactly what the city needs." 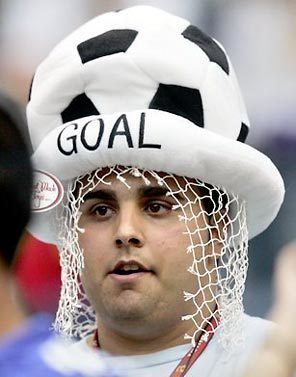