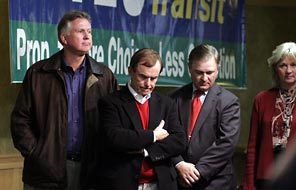 Voters rejected a multibillion-dollar regional roads-and-transit package on Tuesday, likely leaving state lawmakers with a transportation mess that could take years to sort out.

With nearly half of the votes counted, Proposition 1 was failing overwhelmingly early today in King, Pierce and Snohomish counties. In order to pass, the measure would have to win two out of every three votes remaining to be counted.

The measure, the largest tax package ever put on the ballot in Washington, took five years to craft. Political leaders were counting on it to expand light rail, slow the growing gridlock on highways and help pay for enormously expensive projects like replacing the Highway 520 Bridge.

Failure means transportation planners must start over from scratch.

"There is no Plan B," Senate Transportation Chairwoman Mary Margaret Haugen said.

Speculation about what happens next ranges from placing tolls on highways to raise money and reduce congestion, to changing the state constitution so Western Washington can tax itself at higher rates than the rest of the state to pay for projects.

Sound Transit could try to come back to the ballot with a separate transit proposal, and local and state leaders could push a smaller roads package.

Judging from Tuesday's election results, voters were in a belt-tightening mood.

A constitutional amendment that would lower the approval level for school levies from 60 percent of the vote to 50 percent was trailing.

Tim Eyman's Initiative 960, which would require a two-thirds vote in the state Legislature to approve tax increases, was leading. And voters said yes to a constitutional amendment requiring the state to set aside a small portion of tax collections each year in a hard-to-tap "rainy day" fund.

Voters also passed Referendum 67, which would allow policyholders to sue for triple damages if an insurance company "unreasonably" denied a legitimate claim.

With most of the ballots coming in by mail, it could take several days in some cases to determine for sure who's won or lost.

Proposition 1 would have increased car-tab and sales taxes in King, Pierce and Snohomish counties to improve highways and extend light rail. The package would have cost nearly $18 billion in 2006 dollars and around $47 billion over 50 years.

The proposal would have built 186 miles of new road lanes and 50 miles of light rail. Architects of the plan packaged the projects together in the hope of attracting votes from both those who want bigger highways and those who favor mass transit.

They also spread the projects across King, Snohomish and Pierce counties to garner regional support.

Mike O'Brien, chairman of the local chapter of the Sierra Club, watched the results come in at a local pizza restaurant. A well-wisher patted him on the back and whispered, "It's over."

King County Executive Ron Sims, whose reversal on the proposition may have helped defeat it, downplayed his spoiler role. "The voters rejected their plan. I had one vote, the same as anybody else," said Sims, a former Sound Transit chairman.

Sims predicted that Gov. Christine Gregoire would pull all sides together to propose a new plan.

"We've had issues go before the voters the first time, then we came back and were successful the second time. I think that's going to happen this time," he said.

Gregoire could not be reached for comment Tuesday night.

If the vote count doesn't turn around, there'll be a lot of second-guessing about what went wrong. Did voters reject the roads part of the package or the light-rail proposal? Or was the tax increase just too big?

"We'll have to look when we get to the end. Is it the money or the program list?" said House Transportation Chairwoman Judy Clibborn, D-Mercer Island. "I have no good feeling for why people are saying no."

Post-election polling may provide clues, but the reasons likely will vary depending on which part of the three-county region you're talking about.

The Sierra Club, an advocate of light rail, bashed the measure mainly because of the billions that would be spent on roads.

Bellevue developer Kemper Freeman attacked it because of the money going to light rail. Others, including Sims, found fault with the entire proposal.

Support from the state's top political leaders was lukewarm. Gregoire and the House and Senate transportation chairwomen, Clibborn and Haugen, said they wanted Proposition 1 to pass but also made it clear they weren't entirely happy with the plan.

Earlier this year, Proposition 1 backers seemingly had a lock on the election. They'd lined up the bulk of the region's establishment, including Boeing, Microsoft, labor and most of the environmental groups. They raised about $4 million and blanketed the airwaves with slick commercials.

A defeat may feel like déjà vu to many in the campaign.

In 2002, a lot of the same players backed Referendum 51, a statewide transportation package put on the ballot by the state Legislature. It would have increased the gas tax by 9 cents a gallon to pay for billions of dollars in highway projects. That campaign also raised millions for advertising and yet the measure was defeated by about 62 percent to 38 percent of the vote.

Now state and local political leaders may have to regroup and find another way to deal with the same problems: worsening traffic congestion, bridges in danger of collapsing and a growing population that will likely make conditions even worse.

After Referendum 51 failed, legislators went back and increased state gas taxes in stages without asking for voter approval. An effort to repeal a 9.5-cent gas-tax increase in 2005 failed, and the state Department of Transportation started work on several projects.

Christian Sinderman, a Democratic consultant, said there may be a lesson in the Proposition 1 vote. "It's hard to get a clear take-away message, but if voters are saying anything, it's smaller and less expensive," he said. "If voters reject the 10-course dinner, you've got to go back to a la carte."

Clibborn agreed that might be the route lawmakers would take. But she noted that the Legislature likely would not raise gas taxes like it did in the past to build new projects.

State forecasts project that revenue from gas taxes will decline as drivers reduce consumption because of higher gas prices.

So what will the Legislature do in January?

Many opponents have touted congestion pricing — the use of tolls to discourage driving during peak traffic hours — as a way to both reduce traffic jams and provide money for transportation projects.

But last week, Clibborn said she doesn't expect that option to play a major role soon. "I think we could get there in a decade," she said.

Haugen says she'd like to see the state constitution changed to allow Western Washington to tax itself at a higher rate than the rest of the state to tackle transportation projects if Proposition 1 fails.

Still, whatever happens next "isn't going to happen overnight," she said. "It's not a one-session deal." 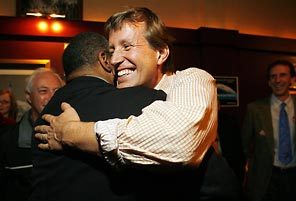 King County Executive Ron Sims embraces Mike O'Brien, local chairman of the Sierra Club, which had been vocal in its opposition to Proposition 1 because it directed billions of dollars toward new roads. Sims also came out against the measure. (DEAN RUTZ / THE SEATTLE TIMES)