In a tentative deal hailed as one of the most important land acquisitions in the region's history, the Port of Seattle plans to buy a 42-mile Eastside rail corridor and lease the southern portion of it to King County for a hiking and biking trail.

Unlike an earlier agreement that appeared headed to defeat in the County Council and the Port Commission, the new $103 million deal has won over key opponents even before its official unveiling this afternoon.

Negotiators dropped the idea of the county's trading Boeing Field to the Port for the BNSF Railway corridor stretching from Renton's Gene Coulon Park to Snohomish.

By leaving the airport in county hands, County Executive Ron Sims and Port CEO Tay Yoshitani eliminated what had been the biggest stumbling block to approval by the Metropolitan King County Council and the Port Commission.

Sims and Yoshitani were unavailable for comment Thursday. The Port Commission meets this afternoon to discuss the deal.

"It means that we can preserve that corridor for the public forever," both as a trail and as a passenger-rail route, said County Councilmember Julia Patterson. After a trail is built and linked to existing trails, she said, "We will have the most extensive regional trail system in the entire country."

The deal would give the Port some income from continued operation of freight trains and, possibly, from passenger trains in the future.

County Councilmember Larry Phillips, the council's most outspoken opponent of the earlier agreement, praised Sims and Port Commission President John Creighton for their work in coming up with a deal he could support.

Putting the rail corridor into public ownership, Phillips said, is "the crowning achievement of the deal. ... It's turning lemons into lemonade. The goal was always worthy, which was why I was so supportive of trying to buy out BNSF. It was just the means that were proposed that gave me great angst."

Port Commissioner Alec Fisken said he believes a majority of the panel will back the proposal. "I can't say with certainty, but if I had to guess, yes."

Fisken stressed the panel will be asked in a special work session today to authorize a "a framework" but not a detailed transaction. That remains to be negotiated by the county and Port.

"From my perspective, getting that corridor in public ownership is a good thing. I hope someday it can become a rail corridor again," Fisken said.

County Councilmember Dow Constantine, who had said he wouldn't vote for the earlier agreement without changes, endorsed the revised deal. Creighton could not be reached for comment Thursday.

Phillips and other council members feared that trading the airport to the Port would lead to more noisy flights over many neighborhoods. Some Port commissioners questioned the original deal's $169 million cost to the Port.

Details of the deal weren't released Thursday. But the Port Commission meeting agenda provides an outline:

• The Port would pay BNSF $103 million for the rail corridor, including a spur to Redmond.

• King County and the Port would negotiate a long-term lease allowing the county to build a trail from Renton to Woodinville.

• The county "agrees to consult" with the Port on "future significant development" at Boeing Field, officially known as King County International Airport.

• The Port would allow freight trains to continue operating between Woodinville and Snohomish.

• The county's Fisher Flour Mill property on Harbor Island would be acquired by the Port for expansion of container-shipping operations.

No answer was given Thursday to a question of paramount importance to pro-rail groups like All Aboard Washington: whether the existing one-way track would be torn up to make way for a trail.

In the past, Sims has said the track can't handle high-capacity trains, while rail advocates say a modest level of passenger service could begin. 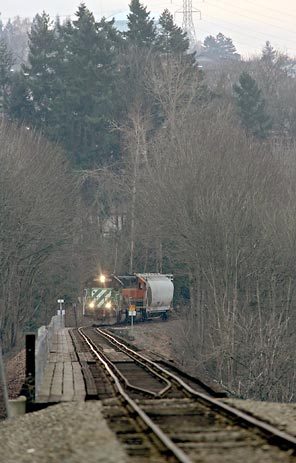 A BNSF locomotive pulls a rail car through Bellevue on tracks near Interstate 405. The Port of Seattle plans to buy a 42-mile Eastside rail corridor. (MARK HARRISON / THE SEATTLE TIMES)