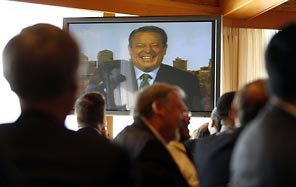 Seattle on Thursday briefly took center stage in the campaign against global warming, basking under a spotlight cast by Nobel laureate Al Gore, former President Bill Clinton, and 110 of the nation's mayors.

At a time when climate change has garnered new levels of public attention in the U.S., most recently with Gore's Nobel Peace Prize for his work on the issue, the United States Conference of Mayors launched its climate summit here.

Mayors exhorted one another to do what the federal government hasn't by promising to cut greenhouse gases in line with targets from the international Kyoto treaty. They swapped notes on how to boost transit service and pay for solar power projects.

And they applauded one another as leaders in the trenches, grappling with the practical challenges of cutting greenhouse gases in their communities.

"We've created 700 laboratories across the country where we are trying to find answers to this global problem," Seattle Mayor Greg Nickels told the audience, referring to the more than 700 mayors who have promised that their cities will comply with Kyoto.

"Your leadership has been nothing short of exceptional," Diaz said.

Gore, speaking via satellite from Nashville, told the mayors they were providing needed political leadership in the U.S. at a time when the threat of climate change requires swift action. The recent findings that the polar ice cap this year had melted more than in any other year on record underscores that urgency, he said.

Beyond local efforts, there should be a ban on new coal-fired power plants unless they are equipped to catch and store carbon once that technology is available, he said.

"Coal is in many ways the biggest part of the problem. ... We've got more than enough to completely incinerate the planet," Gore said. And a new, more comprehensive international treaty should be negotiated by 2009, rather than the scheduled 2012, he also said.

Clinton, at an afternoon talk in a crowded room at Benaroya Hall, told the mayors they needed to help show developing countries such as China and India that tackling climate change isn't tantamount to taking economic castor oil.

"They [developing countries] won't do it anywhere unless we can prove that we don't have to become poorer for it," Clinton said. "This is an opportunity. It's not a burden."

To help spur the movement, Clinton announced a new program between his private Clinton Foundation and the mayors' conference, to make energy-efficient products more affordable for 1,100 U.S. cities by helping them buy as groups and get volume discounts.

His Clinton Climate Initiative has already started a similar project with 40 of the world's largest cities and several major banks that help finance projects to increase energy efficiency.

Clinton said energy efficiency programs represent some of the easiest ways to reduce greenhouse gases by conserving energy in inefficient buildings and other infrastructure.

A new emphasis on such "clean" technology is also a key to tapping into new industries with growth potential that could reverse a decline in real wages in the U.S., Clinton told the audience, which greeted his talk with enthusiastic applause.

Mayors attended from cities as large as Miami and as small as Northglenn, Colo., with politicians from 29 states in all. Mayors registered from 22 Washington cities.

The mayors were met at Benaroya Hall by a small gathering of demonstrators urging people to vote against the regional road and transit tax increase on the ballot, arguing it could exacerbate climate change by increasing traffic. The demonstrators included small children dressed in polar-bear outfits, a reference to polar bears threatened by the loss of ice to warming in the Arctic.

The event drew also media attention from as far away as New York City and Japan.

A team from Japan's public television company, the Japan Broadcasting Corp., was there for part of a weeklong examination of Seattle and its environmental projects.

Reporter Tomoo Sono said it was partly intended as a contrast to the image many Japanese have of the United States and climate change, one shaped primarily by the Bush Administration and its unwillingness to join the Kyoto treaty.

One former Republican is expected to take the stage today. New York Mayor Michael Bloomberg, who left the party and declared himself an independent, is scheduled to address the mayors.

After that, the U.S. House Select Committee on Energy Independence and Global Warming will hold a field hearing chaired by Rep. Jay Inslee, D-Bainbridge Island, to take testimony from the mayors. 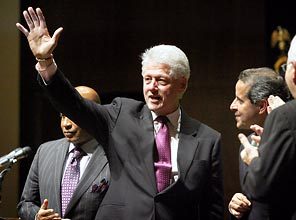