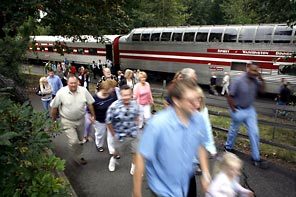 Spirit of Washington passengers disembark in July on their way to the Columbia Winery in Woodinville. The dinner train switched to the Tacoma route in August but ceased operations Monday. (ERIC KAYNE / THE SEATTLE TIMES)
By Erik Lacitis
Seattle Times staff reporter

It was a sudden and inelegant end for a well-known Puget Sound attraction.

For men wanting to impress a girlfriend or spouse, the Spirit of Washington Dinner Train was known for taking romantic couples on a leisurely sightseeing trip accompanied by perhaps cherry-smoked roasted salmon and a glass of Covey Run.

Tuesday morning, those logging onto the firm's Web site to book a $78.99 per person dome-seating dinner trip ($63.99 for parlor seating) were greeted with this stark message in a red box:

"Regretfully, as of Monday, October 29th, 2007, The Spirit of Washington Dinner Train has ceased its operating schedule from Tacoma, Washington. We wish to thank all of our patrons that have supported the dinner train the past 15 years."

Fifty employees were laid off Monday, with 10 or so more being kept on a bit longer to deal with cleanup and passenger refunds.

There is a chance the dinner train might resurrect itself in a Woodinville-Snohomish run. The city of Snohomish optimistically even passed a resolution in March in support of the train.

But that's at least two years away, said Eric Temple, who, along with his brother, Brig, owns the dinner train, as well as "short line" railroads hauling freight in the Yakima, Moses Lake and Vancouver areas.

"It was more of a labor of love," he said. "It was the fun part of the railroad business, instead of pushing box cars around."

As is often the case when businesses close, in Tacoma it came down to money.

And there were some bitter words.

"I'll probably never operate a dinner train again that's under someone else's control," said Temple. "It's interesting to see how a municipally run railroad works versus someone like us. We could have made money. It's the ability to think out of the box, be nimble and be efficient."

He was referring to Tacoma Rail, the city-owned agency that runs 204 miles of track, mostly used for freight, and which the dinner train was leasing for a round-trip run between Tacoma and Lake Kapowsin.

Temple said ticket sales were off by nearly $350,000 in the three months ending in October.

He was comparing ticket sales in Tacoma to when the train ran between Renton and Woodinville's Columbia Winery.

After 15 years of operation, the Spirit of Washington had to find a new route when the widening of Interstate 405 was scheduled to sever the railroad tracks going through Bellevue.

There were glowing words all around when the train found a new home out of Tacoma's Freighthouse Square, and signed a 10-month lease.

Tacoma Mayor Bill Baarsma and Temple even drove a ceremonial golden spike into the track for the inaugural trip on Aug. 3.

But less than three months later, the initially rosy relationship was over.

Temple said that the dinner train was repeatedly moved around the yard and thus hard to clean; that he had to rent lights so passengers could see when boarding; that there was no sewer access, so a contractor had to be hired to pump sewage from the train.

He said there also was a one-mile steep grade out of Tacoma that meant he had to use three locomotives, instead of one, adding extra labor and fuel costs.

Paula Henry, head of Tacoma Rail, replied: "He has his view of issues, and we have ours. He made his business decisions, right or wrong. He's been in the passenger business a very long time and he knew up front what he needed."

Woodinville and Snohomish have high hopes the dinner train will move to a 14-mile stretch of rail between them.

But that can't happen until complicated negotiations are finished for King County to take over Burlington Northern Santa Fe Railroad lines in that area, and not before the county and Temple agree on a contract for the dinner train.

Temple said he needs a "20 years or something" contract or it won't be financially feasible.

That's where Eric Temple expects the train to sit for the next two years.

On the dinner train's Web site, there still was mention of the vision that led the brothers to start their venture.

It was, it said, "to bring back to life one of the greatest of railroad's lost experiences, the dinner train."