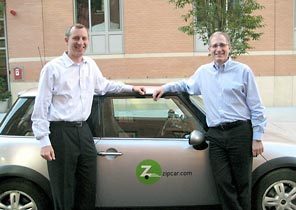 The nation's largest urban car-sharing company, Cambridge, Mass.-based Zipcar, is absorbing Seattle-based Flexcar in a move that could hasten the spread of a business whose rapid growth relies on lifestyle marketing as much as its promise to save people money.

Executives said Tuesday the two will combine by week's end to create a company three times the size of Flexcar, with more than 5,000 vehicles and 180,000 subscribers in 48 cities. Terms of the merger were not disclosed.

The merged company will keep the Zipcar name and headquarters.

The two companies have "pioneered a very interesting big idea," said Griffith. "This deal accelerates that big idea into the mainstream."

The idea is that people who only occasionally need a car pay a membership fee to have access to cars positioned at fixed locations, typically around downtown or a university campus.

Cars can be reserved online in advance and are dropped off at the pickup location after use.

Members typically may use mass transit for work commutes, yet have access to a car when needed without the investment in buying, owning and maintaining their own vehicle.

Flexcar users in Seattle pay an annual $35 membership fee, then have access to cars at a rate of $10 an hour.

Griffith said surveys of its members indicate they save about $5,000 per year by using Flexcar rather than owning a vehicle.

The companies also market themselves as environmentally responsible, by making mass transit a viable option most of the time and reducing unnecessary car trips. Flexcar has 89 hybrid vehicles in its 350-car Seattle fleet.

"More and more people are interested in a sustainable lifestyle and also a hassle-free lifestyle," Griffith said. "We really see it as a lifestyle choice for urban dwellers."

Flexcar's Norman said the business model for both companies — each private and founded in 1999 — has already proved profitable in their more established markets.

But overall corporate profitability has been pushed out, he said, because both have "invested aggressively in growth," producing "double- and triple-digit" increases in revenue and membership.

"New markets ... take a little while to get ramped up and profitable," Norman said. He would not disclose the firms' revenues.

Griffith said Zipcar has grown more than 100 percent for the last three years running. He estimates the potential membership in North America at between 1.5 million and 2 million, compared with a total car-sharing membership base of about 200,000 today.

Flexcar — which started in Seattle and has more than 20,000 members here — has been controlled since 2005 by Revolution, an investment firm owned by ex-AOL Chairman Steve Case.

Some jobs may be lost in Seattle as the headquarters moves to the Boston area.

"As with any merger, there will be some impacts to the staff," said Flexcar spokesman John Williams. "Flexcar will be communicating those changes directly with its employees. Seattle ... will be a significant focus for the company going forward."

Flexcar is strongest on the West Coast. Zipcar operates mostly in the East, as well as in London, Vancouver, B.C., and Toronto.

"When we acquired Flexcar in 2005, our goal was to bring car sharing to more people in more places," Case said in a statement. "The Zipcar merger will accelerate this effort."

The merged company will use the Zipcar technology, which provides smartcards for unlocking the cars, as well as mobile access to the reservation system via cellphones and BlackBerrys.

Once the companies' systems are integrated, members who travel to other cities with the service will have seamless access to the combined network of vehicles. Griffith said the integration will be complete by the middle of next year.

Instead it will rely on word of mouth for continued growth, as well as targeted contracts with universities and big companies to provide service to students and employees on campus.

The University of Washington and the Starbucks headquarters in Sodo are already Flexcar sites, and the company is in talks with Microsoft.

Griffith said the merger deal is not subject to federal antitrust review because the value of the acquired company, Flexcar, "falls below the threshold for filing."

Susan Shaheen, transportation research director with the Institute of Transportation Studies at the University of California, Berkeley, said U-Haul has begun a pilot car-sharing program and that Hertz and Enterprise are looking at options.

"With the entrance of U-Haul and more daily-rental approaches by the rental-car companies, there's always an opportunity for those organizations to more aggressively enter this space," said Shaheen.

She considers the merger a strategic alliance in the face of such potential competition from traditional car-rental companies.

But Norman sees such possibilities only as validating the car-sharing concept rather than threatening competition. He sees car sharing as competing head-to-head only with car ownership.

"That's our competitor: the car that is paid for seven days a week and used for three or four," said Norman. "That kind of waste is a crying shame for consumers with affordability issues living downtown in our most desirable cities, like Seattle."