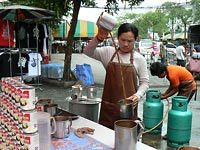 A vendor at Bangkok's Chatuchak weekend market demonstates her "tea pulling'' technique as she cools a fresh batch by pouring the liquid from one container to another. (CAROL PUCCI / THE SEATTLE TIMES)
By Carol Pucci
Seattle Times travel writer

Waking up in Asia

BANGKOK — When my husband, Tom, and I made our first trip to Asia 19 years ago, Bangkok was our first stop. Up at dawn, despite only a few hours of sleep, we had breakfast in the fancy hotel that came at a discount with our airline tickets, then hit the streets to search for a new place to stay the next few nights.

Orange-robed monks carrying wooden begging bowls walked barefoot near temples topped with golden spires. Traffic was a mess. It was hot, crowded and polluted, but this was my first morning in Asia and I felt like I had landed on another planet -- just as I hoped I'd feel after leaving Seattle one day and arriving on the other side of the world at nearly midnight the next.

The marble lobby and wide wooden staircases told me this hotel was out of our price range, but I decided to inquire about the rates anyway, remembering that I read how you could negotiate the price of anything in Bangkok, even hotel rooms.

The desk clerk quoted the equivalent of $40 in Thai baht. "Could you give me a discount?" I asked. He offered me the room for $27, and we checked in later that afternoon.

This morning, back in Bangkok almost 20 years after that first trip, we walked over to the Royal to see what a difference two decades had made.

This time, we have a hotel, the Aurum River Place (www.aurum-bangkok.com), a boutique inn with 12 rooms in a restored 50-year-old warehouse in a historic area on the Chao Phraya River. We'll be needing another, however, for one night at the end of our trip, and I've been curious about the Royal after learning that it was used as a hospital for people injured during pro-democracy demonstrations in 1991.

The price has nearly doubled and the clerk said she couldn't offer me a discount this time, but for $52 for a large room with breakfast, I couldn't complain.

Bangkok's not as dirt-cheap as it once was, but it's still a bargain for American travelers, and, despite its reputation for catering to the sex trade, it still gets my vote as a launching pad for a trip that will take us from Thailand into Malaysia and Vietnam over the next three weeks.

The countries and cultures in this part of the world are as different from each other as Italy is to France or Finland. So my thought was, if we're coming all this way, why pick just one?

Until recently, sampling several on a short trip either meant paying high prices for tickets on airlines that had the market sewn up, or sacrificing valuable travel time on trains or buses.

All that's changed now that no-frills airlines such as Malaysia-based Airasia (www.airasia.com) are making getting around as affordable as Ryanair, easyJet and other low-cost carriers have made flying around Europe.

My flight from Bangkok to Penang cost $130 booked online at airasia.com compared to twice that amount for flights on Malaysia Airlines and Thai Airways. Best of all: The travel time is 1.5 hours compared to 22 hours on the train.

The dollar, although worth less than it did a year ago, still packs more buying power than it does anywhere in Europe. English is widely spoken. Public transportation is improving, and hotel booking sites have ramped up their services overseas.

Here in Bangkok, I snagged one night at the luxury Amari Watergate for $90, including taxes, on Priceline.com. In Kuala Lumpur, the Internet rate of $108 for a double at the four-star Traders Hotel with a rooftop pool and sunset view of the Petronas Twin Towers sounded like a bargain. Then I found an even better deal on Expedia.com — $85 including taxes and booking fees. Travel's not all about saving money, of course, and no one should pick a destination just because it's cheap.

Visiting Southeast Asia isn't just about crossing borders. It's about crossing cultures. We'll be going from Buddhist Thailand, the only country in Southeast Asia never colonized by the West; to multicultural Malaysia, an Islamic country with British-influenced architecture and a large population of Chinese and Indians; to hip Hanoi, the former hub of French Indochina, now the cosmopolitan communist capital of Vietnam.

Watching the long-tail boats and barges ply the river this morning as I sipped my first Thai iced tea from the deck of a cafe, I'm excited to be back. 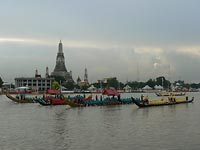 A parade of royal barges cruise along the Chao Phraya River in Bangkok in front of the Temple of the Dawn. The crews were practicing for an upcoming parade to celebrate the king's birthday. (CAROL PUCCI / THE SEATTLE TIMES) 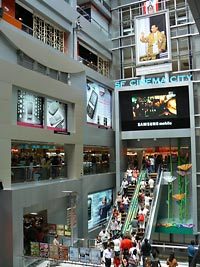 Shopping is a major pastime in Bangkok. With more than 2,500 shops, the MBK mall near Siam Square is one of the city's top attractions. (CAROL PUCCI / THE SEATTLE TIMES)

Bangkok is the largest city in Thailand, the capital and main port. Thailand shares borders with Malaysia, Myanmar, Laos and Cambodia. Its culture is unique in that it's the only country in Southeast Asia that wasn't colonized by the Western Europeans.

History: Bangkok was a small village on the Chao Phraya River until Burmese armies destroyed Ayuthaya, the capital for 400 years, in 1767. Thai rules moved the capital to Thonburi on the west bank of the river, opposite present-day Bangkok. In 1782, the capital was relocated across the river on the east bank (called Rattanakosin) where the Grand Palace, Bangkok's major Buddhist temples and most of the modern commercial development stand today.