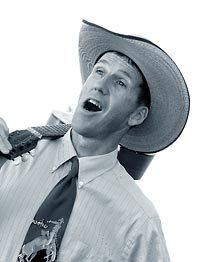 Somewhere deep down inside you is a yodeler. C'mon, you know it's true.

So believes Wylie Gustafson, the country & western crooner and yodeler extraordinaire from the Palouse town of Dusty. And his logically titled "How to Yodel" ($9.95, Gibbs Smith) can help.

His résumé? One of his many albums is titled "Total Yodel." That "yah-hooo-oooo" at the end of every Yahoo! commercial is his warble. And he is a real-life cowboy who works and shows quarter horses when not performing at county fairs, cowboy poetry readings or the Grand Ole Opry.

If that's not enough, the signature song of his long career is titled "The Yodeling Fool," an autobiographical piece about a young man who yodels despite ridicule to become "the finest yodeler in the land."

The short book, which comes with a CD of lessons, touches upon the history and styles of yodeling (mainly Western), and is packed with corny humor and cartoons. He implores each student to make sure he or she practices in private, whether it be on the lonesome prairie or with all the windows shut tight. Once you get it down, he writes, you'll be ready to "show the world just how weird you are."

Gustafson, 46, says fun is mandatory, but he takes his yodeling seriously. He has taught a number of workshops about it, and his next one will be at the National Cowboy Gathering in Elko, Nev., this winter.

"There is a fun factor involved, but parts of yodeling are truly a vocal art form," he said from his ranch. "And depending on the style, it can evolve into a form of high art that takes years of practice and a certain amount of talent. Since there are so many styles and moods of yodeling, the degrees of expression are limitless."

"How to Yodel" is only a primer, and he takes students through the basics: breathing and mouth warm-ups; finding voice breaks (that transition from normal voice to falsetto); and principles of the "triad yodel," a three-note combination that serves as the foundation of the Western yodel.

For the real beginners, he employs a knock-knock joke:

The CD features three yodeling songs off his latest album, "Bucking Horse Moon," and his book lists his 11 favorite yodelers. Sourdough Slim is No. 1. Seattle's Jo Miller, who fronts the "Burly Roughnecks," is also on the list. Yodeling has been embraced by mass-market performers like Gwen Stefani in recent years. Gustafson, who learned the art from his father, Rib, says he had never heard of Stefani, but more yodeling is always a good thing.

"Keeping the art of yodeling alive has always been a quest of mine since the get-go," he says. "Little did I know there would actually be a way of making a living at it. I have been trying to write a hit song for over three decades now. I had no idea that what I will probably be most remembered for is the three-note Yahoo! yodel."