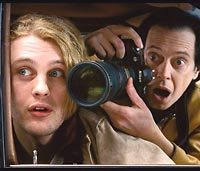 "Delirious" offers a good-natured spin on pop-cultural absurdity in the age of Britney Spears. It's consistent with the bemused quality of Tom Di-

Cillo's previous comedies ("Living in Oblivion," "Box of Moonlight"), but this one's more accessible as a well-timed example of art imitating life.

If you've seen the underrated TV series "Dirt," you know that Irish actor Ian Hart is doing great work as a schizophrenic paparazzo mired in the muck of Hollywood; in "Delirious," Steve Buscemi plays a similar character while drawing from his own gallery of losers and malcontents for sad-sack inspiration. Buscemi's done this before, but nobody does it better.

Buscemi plays Les Galantine, a two-bit New York shutterbug who categorizes people as "peons or professionals," and he reminds anyone who'll listen that he's a licensed professional. His previous coups — tabloid snaps of Goldie Hawn eating lunch and Elvis Costello (who makes an amusing cameo appearance) without a hat on — are enough to impress Toby (Michael Pitt), a pleasantly dim-witted drifter whom Les takes in as an unpaid assistant.

Serving as Les' point man in roving packs of paparazzi, Toby nurses a crush on K'Harma Leeds (Alison Lohman), a Britney-like pop diva who spites a former boy-toy by spontaneously recruiting Toby for a night of wish-fulfillment fantasy. Before long, Toby's in K-Fed territory while Les stews over his parents' disapproval of his "filthy" profession.

"Delirious" stretches credibility when Toby is groomed by a savvy casting director (Gina Gershon), but DiCillo's humor is consistently on target, along with his gentle jabs at the shallowness of celebrity. With simple charm and fashionable grunginess, Toby is so innocently camera-ready (and so perfectly played by Pitt) that he's ripe for the fame game, taking Les' advice to "go with the flow" while Les (another of Buscemi's lovable losers) remains stuck among the bottom-feeders.

As Martin Scorsese did with "The King of Comedy," DiCillo carefully plants the seeds of threatening psychosis, and "Delirious" flirts with potential tragedy. As always, Buscemi masters his portrayal of needy desperation, but he still makes Les admirable for his capacity to go with the flow.