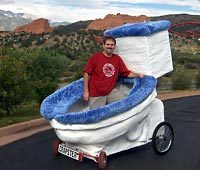 The Crapster wasn't the fastest entry in last weekend's Red Bull Soapbox Race. But in the competition for best-loved entries, the Fremont crowd voted it No. 2.

So the five Colorado Springs, Colo., soapbox racers were more than a little dismayed when they woke Monday morning to find their U-Haul truck had been stolen from outside a downtown Seattle hotel. And whoever had been trolling for loot must have been surprised to open the cargo door and see the 7-foot-tall carpeted toilet.

Tom Valentine, who steered from inside the bowl, said it was his first race.

After success in Seattle, Valentine and crew talked of touring soapbox races across the nation. They even envisioned putting the toilet on pontoons so it could float.

Seattle police took a report of the missing U-Haul, but neither the truck nor the toilet has turned up.

"We put a lot of work and a lot of money into it," said Valentine, 38. He said his father, a retired NASA space-capsule engineer, designed the unusual entry.

It took Valentine and co-workers at Hewlett Packard 25 days to build The Crapster. Back home in Colorado, an appearance by the four-wheeled toilet was quite an event. People blocked roads, snapped photos and even hugged the bowl, Valentine said.

The Crapster finished the half-mile Fremont course in 75 seconds; Valentine said it was clocked at up to 30 mph.

While Valentine is hopeful someone will return their speedy toilet, just talking about the theft makes him and his teammates erupt with laughter.

"It's sad that we lost it, but it's funny that someone stole a U-Haul with a gigantic Crapster inside."