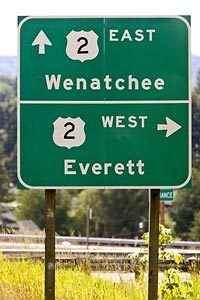 Though traffic has doubled since 1990 and cities along the route have grown rapidly, few major safety improvements have been made. (MIKE SIEGEL / THE SEATTLE TIMES)
By Brad Haynes
Times Snohomish County Bureau

Coming up on another quick bend in Highway 2, former Sultan Police Chief Fred Walser sees one more work of what he euphemistically calls "highway art" — ghastly tire skids, a mangled guardrail and the colored marks of collision-reconstruction experts.

"I investigated another crossover right there once," recalls Walser, who was one of those experts himself during 28 years with the Washington State Patrol.

Where the scorched-rubber tracks veer left across the road, his steady hand pulls the car away, passing just feet from vehicles traveling 60 mph in the opposite direction.

"You see the way the traffic comes right at you?" says Walser. "On a two-lane highway, every crossover crash is a deadly one."

Hazardous design and swelling traffic volume have made these curving miles of undivided two-lane highway the canvas for a staggering amount of grim "art." Since 1999, the 59 miles of Highway 2 between Interstate 5 and Stevens Pass have seen more than 2,600 crashes. Thirty-nine of those have been fatal collisions, claiming 47 lives.

Even as traffic volume has doubled since 1990 and cities along the route are as much as four times larger, major safety improvements have been scarce. In the weeks ahead, the state Department of Transportation (DOT) will release a final draft of its Highway 2 Route Development Plan, listing 52 recommended projects that would cost more than $1 billion if they were all built today.

Safety advocates say higher-profile projects around Seattle are hogging state funding while the death toll in Snohomish County climbs. Local legislators agree that it can be hard to get their colleagues in Olympia to notice Highway 2, one of the state's two major arteries over the Cascades.

"U.S. 2 has languished for years," said Walser, chairman of the U.S. 2 Safety Coalition. "This is not just a rural country road anymore. This is a major American highway."

State Rep. Kirk Pearson, R-Monroe, remembers taking his first big drive along the winding two-lane road when he got his license at age 15. "It looks exactly the same," he said, "except it's a lot more beat-up."

Even the Snohomish bypass, completed in 1983, was just one part of a larger, unfinished bypass plan that would have reshaped the road and avoided the now-booming center of Monroe.

On his first day with the State Patrol, Walser remembers, he consulted his 1968 Thomas Bros. map, which included the outline of a "Proposed Monroe Bypass." That bypass today remains a major part of the DOT's proposals for the highway.

"They could see way back then the growth that was going to come," Walser said. "Now it's upon us."

The safety improvements, however, are still unfunded proposals. Regular maintenance constitutes most of the $70 million worth of work the state has scheduled or completed on the highway between 2001 and 2013.

Nearby Highways 522 and 9, on the other hand, will have received $273 million and $334 million, respectively, over the same period, with major expansions and safety measures at the heart of their funding. Phelps explained that the rapid growth of Seattle's northern suburbs has turned those highways into major commuter routes into the city.

Highway 2 advocates concede that those projects are important — Highway 522 was dubbed the "Highway of Death" until recent improvements passed that moniker to Highway 2 — but they're outraged that their own major artery has been left behind.

Department of Transportation statistics show a nearly identical number of fatal collisions on the two roads since 2000.

Citing statistics, the Highway 2 Safety Coalition and its legislative allies argue that their highway deserves the same size and safety standards as the others — four lanes and a median barrier. They concede that widening the roadway would mean significant costs, especially given the number of bridges along the route.

Last month, Gov. Christine Gregoire directed state transportation officials to spend about $27 million to replace cable barriers with concrete ones along I-5, a response to the latest crossover crash, which broke through a barrier in February.

Kristiansen expressed dismay that between that crash and the last similar accident more than a year before, Highway 2 saw 10 fatal collisions.

"They're [I-5] getting $27 million, and that's important. But at least they have cable barriers in the median keeping cars away from each other," Kristiansen said. "On Highway 2, people are going the same speed, and all we're getting is $700,000 for some rumble strips."

Those state funds, in addition to $1.5 million from the county, will go toward the installation of ribbed concrete along the center line east of Monroe beginning next summer. The safety improvement is meant to alert drivers as their vehicles cross into the oncoming lane.

The rumble strips installed along Highway 522 cut down on fatal collisions and reduced crossover crashes by half, but the strips on Highway 2 are only half as wide because of the roadway's narrowness.

Walser said rumble strips are worth it if they save even one life, but they are too narrow to do much. "The vehicle is over the center line instantly," he said. "You're awake, but you're already in the other lane. That's nothing."

He and other advocates cite alternatives like the steel medians on the West Seattle Bridge, which are slimmer than concrete barriers or rumble strips and, while expensive, would cost a fraction of a major widening. Any kind of funding, though, can be a struggle.

In fact, Highway 2, which runs principally through the districts of Republican legislators who voted against the 2003 and 2005 gas-tax increases, received less than $2.5 million of the revenue, while the rest of Snohomish County received more than $1 billion.

"It's really brutal to say, but the people from those districts didn't support anything as far as funding," said Senate Transportation Committee Chairwoman Mary Margaret Haugen, D-Camano Island. Consequently, less revenue went to districts with legislators who didn't support the tax measure, she explained. "That certainly is a big reason."

Kristiansen confirmed that almost none of the Republican districts in Snohomish County saw revenue from the recent, largely Democratic tax measures, but says the political predicament runs deeper than party affiliation. He pointed out that East County Democrats supported three gas-tax increases through the 1980s and '90s and had just as much trouble securing funding for Highway 2.

The length of his constituents' commutes, Kristiansen said, makes the gas taxes even less fair.

"My district is paying a greater percentage of the gas tax, and we're not getting anything back for it," said the lawmaker. "We're getting tired of it. We're the ones losing neighbors and friends."

Even with the prime sponsorship of Rep. John Lovick, D-Mill Creek, the House speaker pro tempore and highest-ranking Democrat on the House Transportation Committee, legislative efforts for Highway 2 have failed to garner as much as a hearing.

"I've made it a priority, but we just can't seem to get traction," Lovick said. "I can't say it's politics. It comes down to the fact that members just aren't going to vote for an increase in the gas tax to fund that area."

Kristiansen, however, insists that existing funds are available for Highway 2, but that high-profile projects like the Highway 520 bridge over Lake Washington and the Alaskan Way Viaduct in Seattle have distracted attention from the state's deadliest highways.

"It can be political. They don't want to do U.S. 2 right now because other places politically make more sense," Kristiansen said. "People have been deciding that where there's a larger population in the state, we should put our money there. Per capita, our highway is far deadlier, but we're not getting any attention. Come on, people are getting killed here."

"U.S. 2 hasn't received the priority it should," agreed Pearson, who added that citizen efforts like the U.S. 2 Safety Coalition have been essential in generating what little notice the issue has gotten.

Walser, for his part, said local legislators have been instrumental in recent years, adding $700,000 in state funding to a $500,000 federal earmark to finance the Highway 2 safety study. With that in place, lawmakers say, it will be easier to fund specific improvements.

Also helpful may be a legislative field trip to Highway 2 this month as part of a joint House and Senate transportation hearing.

And included in the roughly $18 billion Regional Transportation Investment District proposal coming before voters in November is nearly $50 million for the first phase of the Monroe bypass — a project almost a half-century in the making.

Meanwhile, Highway 2 safety advocates are revising their fatality figures from month to month.

"Every time there's an accident, you just cringe and think, 'Who did we lose now?' " said Kristiansen. "We're taking it personally. There's not a person out here who doesn't know someone that's gotten killed."

Kristiansen lost a good friend at the beginning of last year.

For Walser, it was the death of his assistant in 1997 that galvanized him and the community to form the U.S. 2 Safety Coalition. In May, one of the coalition's members, Genevieve Jelinek, became the 44th person to die on the highway in the past eight years — first a supporter, then a statistic. 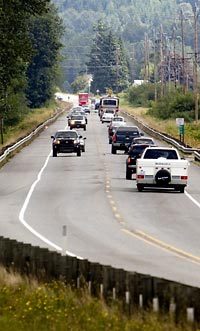 The two-lane section of Highway 2 between Monroe and Sultan near Fern Bluff Road reflects the growing volume of traffic the highway carries. (MIKE SIEGEL / THE SEATTLE TIMES)

Advocates for Highway 2 improvements say that higher-profile projects on congested roads around Seattle gobble up state funding even as the death toll in Snohomish County rises. (MIKE SIEGEL / THE SEATTLE TIMES)

Fred Walser, chairman of the U.S. 2 Safety Coalition and former Sultan police chief, stands where Walser's assistant and her husband died in a 1997 accident. Since 1999, 47 people have lost their lives in Highway 2 crashes between Interstate 5 and Stevens Pass. (MIKE SIEGEL / THE SEATTLE TIMES)