When Dimitri Kieffer decides he wants to see the world, he's not talking luxury liners.

He's talking feet. His own.

Kieffer, a retired Microsoft manager, is trying to be the first person to circumnavigate the globe alone under human power.

While still at the beginning of his adventure, Kieffer figures he's already knocked off the hardest part: the 56-mile walk and ski he took last year from Nome, Alaska, to a tiny settlement in Russia. He became the first person in modern times to cross from Alaska into Russia by foot.

A Canadian, Colin Angus, circumnavigated the globe last year, but his fiancée helped him row across the Atlantic. Dimitri wants to be the first to circle the world on his own power, all 26,000 miles.

"I was blessed with the Bering crossing, so why stop now, if I have the body, the resources, time, money and the right friends," said Kieffer, 41, who grew up in France. "The hardest thing is being away from my loved ones."

It took Kieffer and another adventurer, Karl Bushby, from England, 14 days to walk across the frozen waters of the Bering Strait. When they arrived in the tiny village of Uelen, Russia, they were detained for 54 days for visa violations, before being released.

This year the pair resumed their trek at Uelen, going 425 miles on foot to Egvekinot, a Russian town of 2,400 on the coast of the Bering Sea.

It wasn't easy. First, paperwork delay caused them to leave four months later than they planned and the snow in Russia was starting to melt, making travel by skis more difficult. Then he had to get his 1,200 pounds of gear through customs, where officials took the pair's satellite phones and emergency beacons. Someone loaned them a phone, but it had only one battery and could be used only for emergencies. They had no beacons.

They headed north, following the coast, towing the sled filled with their gear. Unlike the trip across the Bering Sea, Kieffer never had to swim, although he was prepared.

Kieffer, who had been taking Russian lessons, would speak to schoolchildren in the villages they passed through.

"It was an incredible way to get close to the people," he said, "and was quite rewarding."

When he stopped at a doctor's office to get treatment for blisters, the doctor refused to be paid so Kieffer sent him an English dictionary. At one point he and Bushby split up, reuniting at the end of their journey at Egvekinot, where Kieffer flew home.

At one point, he said, he stopped by a gold mine where the 50 miners were amazed to see him. When he told them he had arrived by foot, they said it was impossible — and then they fed and housed him.

He left his gear in Russia, planning to retrieve it when he resumes his trek in December.

Then he hopes to traverse another 1,500 miles through Russia; the following year he'll return with his bicycle and bike across West Africa.

Then he'll row across the Atlantic, either from the Canary Islands to the Caribbean or from Senegal to French Guinea.

That crossing, he said, will take about 100 days.

Then he'll bike, hike and kayak to Anchorage, where he began his adventure.

Born in France, Kieffer visited Seattle as an exchange student and graduated from the University of Washington. Last year he obtained his American citizenship and now carries two passports, but he likes to use his U.S. one on his adventures.

At Microsoft, Kieffer negotiated contracts with countries in the Middle East and Asia. He left in 2004 to become a full-time adventure traveler.

Kieffer said he saved money from his work at Microsoft but has some sponsors helping him on his quest. Eventually, he said he'd like to work for a volunteer organization.

"I've been blessed," he said. "I had a successful career with Microsoft, I live in a small condo and being on the trail is fairly cheap."

He will circle the globe in chunks of time, reuniting with his girlfriend in Seattle. He said the two hope to build a house together in Seattle or Hawaii.

Now he's training for his return to Russia. Earlier this month he walked across the Olympic Peninsula to stay in shape. And he continues his Russian language classes. 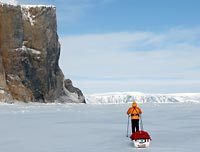 Dimitri Kieffer pulls his sled along the coastal cliffs of Russia, the second phase of his attempt to circumnavigate the globe. (KARL BUSHBY)