So, apparently sometime around the start of the new millennium this town whose name was synonymous with its penitentiary became "the next Napa Valley."

The coronation from the media and by word-of-mouth helped fuel a tourism boom. Hotel rooms became hard to get during wine-festival weekends. Tourists needed dinner reservations on Saturday nights. And Main Street bustled with life.

But psst, this Southeast Washington town not far from the Oregon border isn't like Napa. It's smaller. Its tourism industry comes to a halt during the winter. And unlike Napa, Walla Walla is at least a four-hour drive from major metropolitan areas such as Seattle and Portland. Even Spokane is almost three hours distant.

Still, many tourists have dubbed this the "next Napa," mostly because this town of 30,000 appears bigger and is more cosmopolitan than most farming towns in the middle of nowhere.

Walla Walla has 600 acres of parks, including a 58-acre spread with an exotic bird aviary. It has the nationally acclaimed Walla Walla Foundry, a symphony, three colleges — including highly respected Whitman — and a devoted theater and arts community. And thanks to the booming wine industry, it draws many young, ambitious chefs who want to create the next great foodie destination.

The town, as old-timers say, is so nice, they named it twice.

"This is utopia Americana," said Whitman College geology professor Kevin Pogue, driving by the rows of colonial houses along South Palouse Street, where hummingbirds can often be heard in the background. He lowered his voice. "But don't tell anyone."

Main Street is emblematic of the old and new Walla Walla. This historic row, where President Theodore Roosevelt paraded in 1903, has an antique sidewalk clock that gets wound every Friday, a deli that still uses a soda fountain from 1915 and Beaux Arts buildings that once housed bordellos. Now they share the same corners with wine-tasting rooms and bistros.

On the outskirts of town are orchards and vineyards, wheat and pea fields, and to the south the majestic Blue Mountains. The view from Pepper Bridge and Northstar wineries is not to be missed.

"It's so interesting to see [tourists]. They get to Walla Walla and want to see every winery. It's go, go, go!" said Michele Rennie, co-owner of the new Girasol Inn & Vineyard near Pepper Bridge Winery. "But by day two, they slow down, look at the mountains and the vineyards and watch the hawks circle the fields. And they begin to appreciate what wine-country living is all about."

The sweet onion may be this town's biggest culinary contribution, but it's the merlot that put it on the tourists' radar. In 1977, Italian immigrant Gary Figgins started Leonetti Cellar and word spread nationwide after Wine Spectator magazine declared that Figgins' merlot was the nation's finest.

Just like that, a town Native Americans called a "place of many waters" became a place for many wineries.

Walla Walla, which had six wineries in 1990, now hosts more than 100 in the valley. With an average of one winery debuting every 30 days now, many winemakers rely on Columbia Valley grapes since Walla Walla can't grow enough fruit to meet the demand.

The gold standard remains Leonetti, a cult wine with a seven-year waiting list. Last year, cases of Leonetti were requested when the governor hosted a dinner at Bill Gates' home to honor Chinese President Hu Jintao. But the Figgins family said it didn't have enough wine and directed party planners to look on store shelves.

Chris Figgins, Gary's son and the current Leonetti winemaker, said the family will add 5,000 cases under a new label in 2011.

These days, syrah is the new merlot in Walla Walla, the reason many "no vacancy" signs are lit.

No one makes it better than French winemaker Christophe Baron of Cayuse Vineyards, whose rich, sweet syrah is nationally acclaimed and, like Leonetti, has a waiting list.

Unlike Napa, where wineries hawk everything from T-shirts to baseball caps, many boutique wineries here remain less commercial and less formal. Take Rulo Winery, where winemaker Kurt Schlicker and his wife, Vicki Schlicker, were weeding their garden until a visitor pulled up in their gravel driveway for a wine tasting.

Recent newcomers include Steve Brooks, a news producer who quit his CNN job to start Trust Cellars, and actor Kyle MacLachlan of "Twin Peaks" fame, who came to town recently while on break from "Desperate Housewives" taping to launch his own wine label, Pursued By Bear (from the famous Shakespearean stage direction). It debuts this fall.

"I thought about Napa Valley, but I'm from here," the Yakima native and University of Washington graduate said between sips of coffee at the swanky Inn at Abeja. "And they make great wines in Walla Walla."

A food destination, too

All the buzz has inspired many chefs to relocate here, including those with culinary lineage to highly Zagat-rated restaurants such as Salish Lodge and Seattle's Campagne. This historic wheat-farming town, many veteran winemakers believe, is just three to four years away from being a great wine and food destination.

In downtown, Whitehouse-Crawford Restaurant serves a wok-fried beef salad in homage to the "Shaking Beef" entree at the acclaimed Slanted Door restaurant in San Francisco.

Nearby, 26 brix restaurant features a hangar steak and frites with a sauce reminiscent of the secret steak sauce served at the popular Le Relais de Venise in Paris.

Grapefields, a wine bar and cafe, remains a favorite among the new French winemakers. (Their favorite wine: the 2005 Cotes-du Rhone Saint-Esprit Delas.)

But the latest hot spot is Saffron Mediterranean Kitchen, where chef and owner Christopher Ainsworth, formerly of the Fish Club in Seattle, serves quail, pheasant and Kobe beef to a full house every night. Ainsworth and his wife plan to open a Vietnamese restaurant next door this fall.

Rumors are rampant that another wave of young chefs is coming in the next two years.

But the lesson of 26 brix should temper some expectations. Three years ago, 26 brix chef Mike Davis wanted to do for Walla Walla what the French Laundry's Thomas Keller did for the Napa Valley's Yountville.

Business boomed during the summers, but his white-tablecloth dining room was empty during the winters, especially when avalanche warnings shut down the mountain pass. Locals also didn't want to pay $42 for a New York steak, so Davis added cheaper entrees and bigger portions.

Just another reminder that this isn't Napa. But it isn't bad, either.

One-way roads lead in and out of Pepper Bridge Winery, four miles south of Walla Walla. Fuji and Gala apples are also grown there. (TERESA TAMURA / SPECIAL TO THE SEATTLE TIMES)

Steve and Dianna Woolley try the latest release from the Foundry Vineyard in Walla Walla. (TERESA TAMURA / SPECIAL TO THE SEATTLE TIMES) 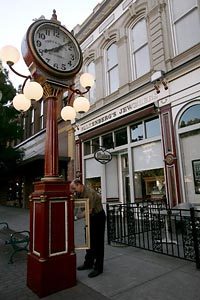 Skip Cundiff cranks up the clock on Main Street in Walla Walla. (TERESA TAMURA / SPECIAL TO THE SEATTLE TIMES)

Arthur Best, of Kirkland, finishes the last of some merlot after dinner at Saffron Mediterranean Kitchen. Chef and owner Christopher Ainsworth is formerly of the Fish Club in Seattle. (TERESA TAMURA / SPECIAL TO THE SEATTLE TIMES)

The Blue Mountains provide a backdrop for the Mill Creek Recreation Area, which has a network of more than 20 miles of paved multiple-use paths. (TERESA TAMURA / SPECIAL TO THE SEATTLE TIMES)