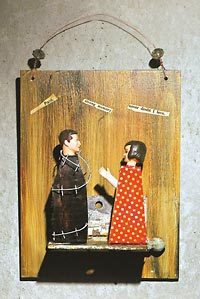 Vera has learned to walk softly through the emotional minefield left behind by the man who sexually abused her husband three to four times a week for 11 years.

"He can flip back and forth so much and so quickly," says Vera, who asked that we not reveal her last name. She lives south of Seattle with her husband, Mark. "The toughest thing is to constantly remind myself that there's something bigger here than us." Vera represents an often-forgotten population — the partners of childhood sexual-abuse victims. For these couples, ordinary relationship struggles are often compounded by the legacies of abuse. Adult survivors often experience depression, anxiety, substance abuse, career problems, inability to achieve physical or emotional intimacy and shame about sexuality.

Janice Palm, a therapist and executive director of Shepherd's Counseling Services on Capitol Hill, recites the oft-quoted stats — one in three girls will be molested by the time they're 18; one in five boys.

Unwanted sexual experience affects different people differently. As Palm notes, not all such experiences cause lifelong trauma. As in Mark's case, the effects were significant. As he and other survivors of abuse mature and move into adult relationships, they take with them all the baggage of their abuse.

Mark's baggage led to a nervous breakdown. His first girlfriend encouraged him to divulge the abuse to his parents. Their reaction: They were relieved to learn that his girlfriend wasn't pregnant.

Therapy followed. After Mark and Vera met at a Massachusetts radio station, she asked him out. They clicked and have been together ever since.

In the 14 years of their relationship, Vera has learned to anticipate Mark's needs, to appreciate his difficulty making friends, to understand his go-it-alone approach to addressing the scars of his abuse.

"Intimacy has been an issue throughout, in terms of who initiates it, and the timing of it," Vera says. "Is one of us coming on too strong, or not enough? A lot of our arguments revolve around trying to figure out where the other is coming from. I'm more open. He can be more guarded."

Palm says childhood sexual abuse creates a "ripple effect" for partners. They feel confusion, a strong desire to help and be the "good" person, frustration over rejection of those efforts, and what Palm calls "compassion fatigue."

"When anyone is struggling for a sense of self and self-worth, with identity issues, with depression, with problems of intimacy and trust, it can't help but affect their partner," Holwerda says.

Shannon, who lives in Damascus, Md., has struggled in her two-year live-in relationship with her boyfriend. She survived seven years of abuse by her older sister. The effects of that abuse carried unconsciously into her sex life. After sex, she would often curl into a fetal position and begin crying uncontrollably.

"One time I addressed him during sex as my sister," Shannon says. "My boyfriend didn't understand what had happened to me. He thought it was him, that he had said something wrong."

He eventually suggested they refrain from sex, to protect her from the painful past — and to protect himself from her land mines.

"I struggle with his acceptance and love of me," she says, "because that's what I was told when I was being abused — that I was loved. I had to earn my sister's love by performing sexual acts."

For abuse victims, adult relationships often begin as they do for people without abuse in their backgrounds: attraction, intimacy, trust. As the relationship evolves, however, the abuse survivor often starts to withdraw physically and emotionally.

"Things tend to spin out," Holwerda says. "The tension builds, the mistrust builds."

Sexual abuse is at heart a violation of trust.

"Being in an intimate emotional relationship requires vulnerability," Palm says. "For the abuse survivor, it's scary to be vulnerable: What I experienced is hurtful, scary, so part of the brain says, 'Don't go there; you're going to hurt.' "

Vera says her husband's anger at the adults who failed to protect him from his abuser led to bouts of road rage, outbursts of throwing objects around, slamming doors. She eventually insisted that he return to counseling if they ever were to adopt children.

Intimacy has been a challenge for Jim J., a south Puget Sound resident, and his partner of 20 years. Abused by his aunt when he was 5, and later drawn into a sexual relationship with a substitute high-school teacher, Jim says he had trouble forming long-term relationships. He didn't trust women, feared being hurt again.

He describes his current relationship as more "brother-sister." He and his partner haven't been sexual for years, he says. "It's hard to be intimate with someone physically if you've been intimate with them emotionally and you've drawn back from it," says Jim, who has also requested anonymity.

"The paradox for the survivor is that the relationship with the partner is both the source of pain and the source of healing," she says.

Sexual abuse dooms many relationships, Holwerda says. Either they blow up in short order, or couples seek counseling but can't commit the time it takes to soften the scar tissue.

"The vast majority of these cases aren't successful," he says. "The protective layers make it difficult for a person to find true intimacy."

Seven years into her unmarried relationship with Mark, Vera says both had their doubts about long-term success. "But we didn't see ourselves without each other," she says. So, they got married.

With time, she learned better how to handle her husband's mood swings. Counseling has turned him more introspective, quieter, sadder. "I give him a lot of room to process," she says. "I don't ask about his sessions."

Despite the odds, Vera thinks she and Mark will make their marriage last. "We got married when we least liked each other, and we've been happier since," she says. "He has made a huge effort to go back to therapy, and that says a lot."

Future plans dominate talk these days. Hope survives. And in the summer or early fall of 2008, they will add a child from China to their family.