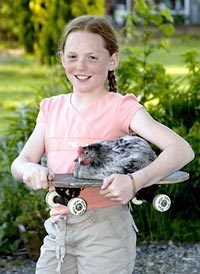 One of Hannah Dahlquist's pets is a rooster she nicknamed Tony Chickenhawk. (COURTESY OF JEFF GREENE)
By Karen Johnson
Times Southeast Bureau

It's hard for Hannah Dahlquist to imagine her family's Enumclaw farmhouse without their flock of chickens.

That's why the 12-year-old was so disturbed when a letter came from King County Animal Services last month.

The complaint notice — usually sent to owners of barking dogs — asked the Dahlquists to quiet their pet rooster, Fancy Pants, or risk fines of up to $1,000.

It came just weeks after Hannah won second place at the King County Fair's Royal Critter competition, where Dahlquist wowed judges with the Antwerp Belgian rooster she nicknamed Tony Chickenhawk and trained to ride a skateboard.

Rural families who have chickens, pigs and cows are a relatively new source of noise worries for the agency, Dams said.

"Areas like these were rural not long ago," Dams said. "Now things are growing up around them. People still want to keep the rural-type animals."

King County Animal Service officers spend most of their time dealing with dog and cat complaints, but these days, calls about farm animals — crowing roosters, stray cows and whining peacocks — are not uncommon.

The Dahlquists bought their six chickens earlier this year from Del's Feed and Farm Supply, a popular feed and farm-supply store in Enumclaw.

Del's manager, Jim Nadig, estimates that sales of baby chicks have increased by 25 percent since he started at the store seven years ago.

Although many customers raise the birds for eggs, an increasing crop of bird lovers are buying the plucky chicks to keep as pets.

"If you handle them a lot, they become really tame," Nadig said.

But, as Nadig tells his customers, even tame roosters crow.

They've even tried blocking the bird from sunlight, hoping it would suppress the rooster's noisy calls until a decent hour.

But the Dahlquists say they will continue to search for a way to keep their birds quiet and their neighbors happy.

"You'd think people out here would be more understanding," said Hannah's dad, Jeff Dahlquist. "You can smell cows when you're driving into town."