My partner, Kate Fleming, touched thousands of lives with her voice. With astonishing versatility and vivacity, she narrated more than 250 audiobooks as diverse as "A Beautiful Mind," "Bel Canto" and "A Tree Grows in Brooklyn."

Recording these stories in the basement studio of our Seattle home, she created a kaleidoscope of unforgettable characters with merely her vocal cords. Throughout the decade Kate and I lived together, we shared so much in common — our Roman Catholic faith, our unshakeable family bonds, our love for dance, our wicked sense of humor — but only she was sought out for her voice.

Now, with presidential candidates arriving in Los Angeles today to discuss the stories and concerns of the gay community in an unprecedented forum on gay rights, it's my voice that must explain how what happened that day reveals what is truly at stake when we talk about equality.

On Dec. 14, a rainstorm with strength like I've never seen swept through this city. While I was at work, our home began to flood. Kate dashed into our basement to retrieve her recording equipment and got trapped when something fell in front of the studio door as the water rushed in. When she told me what was happening from her cellphone, I ran home through the pouring rain. After I arrived, Kate kept reassuring me with her calming voice over the phone as I fought with all my might to pry open the door to the studio. Before I knew it, the water rose above my head. After I almost drowned, I was forced to swim away.

A nearly unendurable 15 minutes then went by as a rescue team pulled Kate, unconscious, from our demolished home. As the ambulance rushed her to a trauma center, my mother, brother and I drove fast behind. When we arrived at the hospital, I instinctively ran to be with Kate.

But, as I neared the entrance of the emergency room, a social worker stopped me in my tracks. After I explained that I was Kate's partner of 10 years, the social worker told me that the state could not recognize same-sex partners in emergency situations. As if I were a stranger, I needed to receive the permission of one of Kate's family members to be near her and to make decisions for her care. For what seemed like an eternity, I frantically dialed her sister in Virginia. I thought with a shudder: "What if no one is home? What if Kate dies without me holding her hand?"

After being barred from comforting Kate during these harrowing moments, I finally received permission from Kate's sister to be with her. From that point on, I was treated like any other spouse fighting for their loved one.

That night, Kate died with me beside her. I removed the wedding ring that she wore and the necklace I gave her for her 40th birthday. I could tell her that I loved her.

Even after Kate's passing, I still had to fight for recognition as her spouse. Since I was not her legal wife, the funeral director would not address me as Kate's family or let me make her funeral arrangements. Kate's mother had to sign the request for her cremation. The death certificate stated that she had never been married. Kate's voice could no longer speak out against these mounting indignities.

It was my voice that was called for. In January, the state Legislature began to consider a domestic-partner bill recognizing that couples like Kate and I should have the basic rights to be at each other's side in the hospital and to make each other's end-of-life decisions. Though overwhelmed by grief, I felt compelled to tell our story before the House and Senate because I could not stomach the idea that another couple might go through what Kate and I endured. After hearing my voice amongst a chorus of others sharing their heartbreaking stories, Washington passed the domestic-partner bill, which just went into effect.

In spite of Washington's groundbreaking advance, the struggle of gay Americans for essential equality is far from over. The laws of most states still threaten to block millions of people from holding their hospitalized partner's hand while they are frightened or dying — simply because they are gay.

Now that many presidential candidates are making the effort to listen to our stories, we must speak up about the gravity of the rights that domestic partnership, civil unions and marriage can confer and that anti-gay-marriage amendments may take away.

As Kate used her beautiful voice to bring stories to life, we all need to use ours if we want to make words like "equality" and "dignity" a reality across this nation.

Charlene Strong lives in Seattle and is coproducer of the feature documentary "For My Wife." 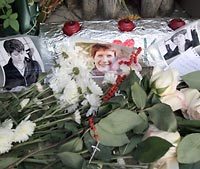