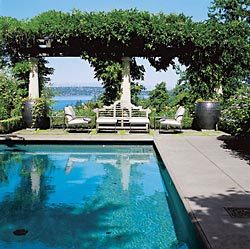 The swimming pool is original to the gar- den; the arbor and giant pots are new. (BARRY WONG / THE SEATTLE TIMES)
By Valerie Easton

To emphasize his love and knowledge of plants, David Pfeiffer calls himself a garden architect rather than a landscape architect. Fairly or not, we often think of landscape architects as concentrating on hardscape and drainage to the exclusion of the living, growing layer of the garden. But Pfeiffer's design for Ginny and John Meisenbach's Bellevue property is as flowery and fragrant as it is elegant.

Pfeiffer began his update of the quarter-century-old garden by tearing up the concrete driveway and replacing it with gravel. Now the approach to the home is casual and crunchy, emphasizing the wooded, naturalistic feel of the place. The plan to replace all that impervious surface was in keeping with the Meisenbachs' decision to renovate, rather than tear down, their 1970s home to avoid the waste of demolition.

While the inside remodel was going on, Pfeiffer was working outside to extend the home's architecture out into the garden. Near the home's entry, a hefty arbor wrapped in honeysuckle mingles with hemlocks and cedar as backdrop to a bright, frilly circle of flowers. The colorful blooms hint at the delights just inside the garden gate — also designed by Pfeiffer — of powder-coated wrought iron. This filigreed portal gives a feminine touch to the Pennsylvania fieldstone walls enclosing the little courtyard.

"It's so welcoming to hear water as you come into a garden; it's almost as welcoming as scent," says Pfeiffer of the fountain you can hear, but not see, until you step into the courtyard. This little stone-floored enclave just outside her kitchen window is Ginny's favorite part of the garden. Water spurts from the mouths of three lizard-shaped spouts into an antique Chinese stone watering trough. This engaging water scene has competition for the most charming feature in the courtyard: The tops of the stone walls are planted with sedum, herbs, thyme and rosemary. Once established, these drought-tolerant plants flourish without irrigation, tempting anyone coming into the courtyard to sniff, touch and pick from the nearly nose-high garden.

Beyond the entry courtyard, the garden opens to terraces, swimming pool and a wide-open view of Lake Washington and the Seattle skyline. "Ginny likes the garden colorful and filled with annuals," says Pfeiffer of the overflowing bouquet-like containers on the terraces. Generously scaled boxes hold bay trees pruned into standards, fluffed out with flowers in shades of blue, purple, chartreuse and orange. Pfeiffer and Meisenbach give full credit to gardener Kevin Baker, who maintains this complicated garden and plants all the seasonal color.

Broad steps lead down the hillside to an area that used to be nothing but dull shrubbery and dog lawn despite its full-on water view. Inspired by Ginny's love of roses, Pfeiffer pumped up the garden's romanticism on this lower level. Now you can look down from the terraces onto billowing roses anchored with boxwood cones. All the roses are own-root, supremely fragrant, in shades of white through salmon. No rose ghetto here — perennials mingle beneath the shrubs, and cherry tomatoes cascade from stone planters.

And just in case the old-fashioned roses aren't quite intoxicating enough, Pfeiffer added white Casa Blanca lilies. "I tried to create something that would draw Ginny down into the garden," says Pfeiffer, understating the allure of the wild rose garden at the heart of the Meisenbachs' renovated property.

Valerie Easton is a Seattle freelance writer and author of "A Pattern Garden." Her e-mail address is valeaston@comcast.net. Barry Wong is a Seattle-based freelance photographer. He can be reached at studio@barrywongphoto.com. 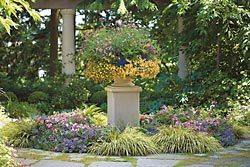 A circle at the front entry is planted with the colorful annuals that owner Ginny Meisenbach loves. (BARRY WONG / THE SEATTLE TIMES) 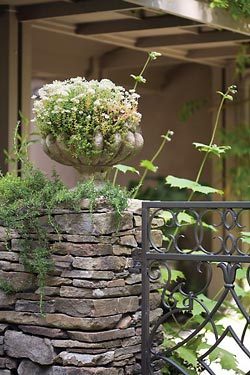 Pennsylvania bluestone walls are mortared in back for longevity and sturdiness, yet they look like classic dry-stack stonework. David Pfeiffer designed the wrought-iron gate; the urn overflows with sedum. (BARRY WONG / THE SEATTLE TIMES) 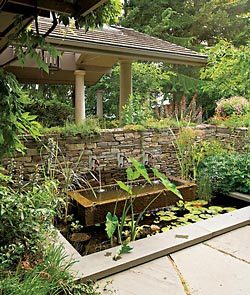 Lizards spout water into a Chinese basin, which overflows into the pond to make a double-layer water feature in the courtyard. If you look closely you can see the sedums and herbs growing on top of the stone walls. (BARRY WONG / THE SEATTLE TIMES) 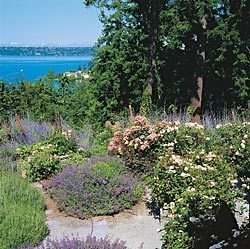 David Pfeiffer is one landscape architect who uses plants lavishly. He under-planted Ginny Meisenbach's rose garden with perennials chosen to complement the pale roses, including:

• Heucheras with dark purple leaves to contrast with the mostly white, pink and peach roses.