"We're in crisis," says Mike Dyer, a nurse at Western State Hospital. "We're losing [nurses] faster than we can recruit them." New contracts signed with public-employee unions try to narrow the gap between state salaries and those paid in the private sector. (DEAN RUTZ / THE SEATTLE TIMES)
By Ralph Thomas
Seattle Times Olympia bureau

Starting this month, Dyer, a nurse with more than two decades of experience at Western State Hospital, will see his salary jump by 20 percent — pushing his annual pay from about $67,500 to more than $81,000.

Many state workers are getting the biggest raises they've seen in nearly two decades — maybe the biggest ever — under new contracts negotiated by Gov. Christine Gregoire's office and approved by the Democrat-

Thousands of workers are getting double-digit increases. Some raises exceed 25 percent. In all, increases in salaries and benefits for some 111,000 state workers will cost nearly $1.6 billion in state, federal and other funds over the next two years.

The state's surging economy made the raises possible. But they're also a testament to the growing clout of the state's public-employee unions.

Since winning broad new collective-bargaining powers from the Legislature in recent years, the largest state-worker unions have more than doubled in size and reaped millions of dollars in additional dues.

Union leaders say the strength they've gained — which is paying off in ways beyond the wage increases — isn't good only for workers. Ending years of salary stagnation helps the state tackle costly recruitment and retention problems, they say.

"We're in crisis," said Dyer, a member of the Service Employees International Union (SEIU) Local 1199, which represents nurses at the state's two psychiatric hospitals. "We're losing [nurses] faster than we can recruit them."

Gregoire agrees the new bargaining system has been a good thing, but says she knows there is a balance she must strike.

"My goal is: Do right by the employee, hold them accountable for results and do right by the taxpayers at the same time," Gregoire said.

But Gregoire's political opponents are nervous about what they see as a mutual back-scratching arrangement between the unions and their Democratic allies.

"It's a perfect machine to generate millions of dollars for her re-election," said J. Vander Stoep, an attorney and close political adviser to Republican Dino Rossi, who narrowly lost to Gregoire in the 2004 governor's race. "They are building something that conceivably can never be undone — at taxpayer expense."

Meanwhile, many of the state's biggest taxpayers fear they'll get stuck with the tab for rising state-employee costs.

"That's a huge concern," said Don Brunell, president of the Association of Washington Business. "The unions have so much clout, and they're basically funding the people they're bargaining with."

For decades, state employees could negotiate workplace conditions, but not wages.

To get pay raises, state employees had to get in line with the dozens of the other interest groups seeking budget increases from the Legislature.

Union leaders referred to it as "collective begging."

"It was a broken process," said Greg Devereux, executive director of the Washington Federation of State Employees (known as the Federation). "We were always the last consideration in the legislative process."

The unions also were frustrated that their contracts could not include "union-security" clauses that would require all employees in a bargaining unit to either become dues-paying members or pay representation fees.

In 2002, after helping Democrats win full control of the Legislature, the Federation and other unions persuaded lawmakers to lift the collective-bargaining restrictions. The Legislature has since granted similar rights to most higher-education employees.

More than a dozen unions representing workers in more than 70 state agencies and colleges now negotiate with the governor for pay raises, and can include union-security language in their contracts.

Most of the state's four-year universities bargain directly with the unions.

Legislators cannot tinker with the contracts. They can only vote up or down on whether to fund them.

When the first such contracts took effect in July 2005, the number of state workers paying union dues or fees doubled overnight.

The Federation, the largest state-employee union, went from 19,000 members to about 39,000 workers paying dues or representation fees. Its annual income doubled, to nearly $12 million.

The growth was even more dramatic for Teamsters Local 117, which represents prison corrections officers. Local 117's membership shot up from about 1,900 to about 5,100 — an increase worth nearly $1.5 million to the union.

A similar story has been playing out for thousands of people who are paid by the state but aren't technically state employees.

In 2001, the Service Employees International Union (SEIU) spent more than $1 million on a successful ballot measure that gave collective-bargaining rights to home-health-care workers paid by the state. About 28,000 such workers have since organized under SEIU Local 775.

As happened in other states, the switch to collective bargaining here didn't just fuel rapid union growth. It also altered the political landscape.

"Once that law was passed, there was sort of a guarantee that union political strength would be enhanced," Kearney said.

With the surge of dues, the Federation doubled its staff to about 100 and opened three new field offices.

The union also added a third full-time lobbyist and, during this year's legislative session, had more rank-and-file members working the Capitol than ever before, the Federation's Devereux said.

In 2006, a year in which Democrats won their largest legislative majorities in decades, the Federation's political spending topped $600,000. That included about $360,000 in campaign donations — nearly 90 percent to Democrats.

In 2004, the Federation spent nearly $640,000 on lobbying and campaigns, much of it to help Gregoire win the closest governor's race in state history.

On top of that, the union's national organization — the American Federation of State, County and Municipal Employees — gave $250,000 to the state Democratic Party to help pay for the final hand recount in the governor's election. That recount gave Gregoire her 129-vote victory over Rossi.

The SEIU, meanwhile, has become one of the state's biggest political spenders. The union spent well over $2 million in the 2004 election, much of it to help Gregoire defeat Rossi, a former state senator who opposed the collective-bargaining laws and state-worker pay increases in the Legislature.

The state's budget surplus made it easier for the unions to win this year's pay increases. It also helped that, in 2005, Gregoire gave her cabinet members raises averaging nearly 16 percent.

But the unions have won raises during bleaker times, too.

In 2004, when the state faced a $1 billion budget shortfall, workers got 4.8 percent cost-of-living raises and many got much more in contracts negotiated by then-Gov. Gary Locke.

"I can assure you, in times past, they would have gotten nothing," Gregoire said.

But the worker raises are just one example of the newfound union muscle.

Since Gregoire took office, state government has added more than 8,000 full-time jobs, which has contributed to the union growth. And it was mostly nonunion jobs that were cut the past two years by her much-heralded move to eliminate 1,000 middle managers from state government.

As was the case the past two years, tens of thousands of nonunion state workers must wait until September for their cost-of-living raises to take effect.

Critics say the delayed pay raises are meant to reward union members, and will undercut efforts at a few state agencies to decertify union bargaining units.

"They're looking for ways to say, 'Hey, you get something for being in the union,' " said Dennis Redmon, a Department of Revenue employee who's leading a decertification effort at that agency. "It's just outrageous."

Meanwhile, the governor and lawmakers are helping the unions gain access to thousands of additional members.

Last year, the Legislature passed a bill that allowed SEIU Local 925 to organize about 10,000 state-paid child-care providers. The union this year won more than $85 million in increases for those providers.

Now the Federation is looking to mimic the SEIU's strategy of organizing state-paid vendors. Legislation approved this year enables the union to begin organizing more than 2,000 adult-family-home providers — private businesses that are paid by the state to run small-scale assisted-living homes.

The Federation also is maneuvering to become the first union in the nation to organize foster parents. The Legislature ordered a state study that would be the first step down that path, though Gregoire has indicated she opposes unionizing foster parents.

Is a backlash possible?

As is the case in most states, union membership in Washington's private sector has dwindled steadily over the past two decades.

But thanks largely to the growth of public-sector unions, Washington remains the nation's fifth-strongest union state. Nearly one in five workers here belongs to a union.

Some labor experts warn that if the public sees unions as predominantly government-worker organizations, the labor movement could face a backlash.

Others say state-worker unions could suffer if the public perceives that government wages are rising faster than in the private sector.

Kearney, the professor from North Carolina, has tracked other states where government employees won collective-bargaining rights since the 1970s. In most cases, he said, the workers got big raises in the first few contracts before things began to "stabilize."

Kearney said in most other states where workers have bargaining rights, the governor's office doesn't do the negotiating. Instead, that task is usually contracted out to labor lawyers.

Despite the new raises, union leaders here say the pay for thousands of workers still lags far behind local government and private-sector wages.

But union members said Gregoire, who started out as a clerk-typist for the state and has spent nearly her entire career in state government, deserves praise for trying to address critical recruitment problems.

The next round of contract negotiations between the unions and Gregoire will take place in the summer and fall of 2008 — in the middle of her re-election campaign.

Gregoire's political foes predict the unions will make sure to reward her and other Democrats for the new contracts. And they warn that it will be harder for the governor and Legislature to say no to the unions in future negotiations.

"I expect them to be good soldiers," Gregoire said. "We've shown that, when we do have revenue, we will be very fair to folks, so when we're in troubled times we'll expect the same fairness from them." 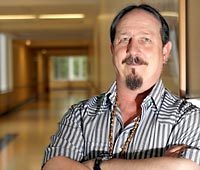 Mike Dyer, a nurse at Western State Hospital, is getting a 20 percent raise, effective today, thanks to the state's strong economy and Dyer's powerful union. (DEAN RUTZ / THE SEATTLE TIMES)