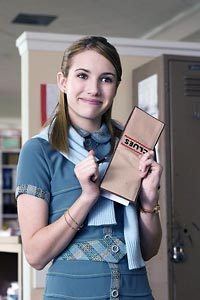 This Nancy Drew is a throwback, and Emma Roberts plays her with an irresistible sweetness. ( / MCCLATCHY NEWSPAPERS)
By Moira Macdonald
Seattle Times movie critic

"You're just not like other girls, Nancy," says an adoring acolyte in the new teen-detective movie "Nancy Drew," and he's not kidding.

Nancy (Emma Roberts), a pert 16-year-old with eyes like saucers and a voice like a flute, wears smart little outfits with matching headbands and perfectly tied cardigans; when she sits down, she carefully smoothes her skirt beneath her. In her suitcase, clothes are folded as flat as platters; in her packed lunch, all the carrot sticks are precisely the same size. When chasing a suspect in her sporty blue roadster, she won't drive above the posted limits. And when, in an attempted escape, she drops from the lighting grid of a theater onto the floor in front of the three burly men who kidnapped her earlier that day, what does she say? Very politely: "Excuse me."

And, for those of us who spent way too much time in our childhood reading Nancy Drew books, all of this feels exactly right. Nancy, the titian-haired girl detective from River Heights, has been a cultural icon since the 1930s, when the books detailing her adventures began to appear with such titles as "The Secret of the Old Clock," and "The Clue of the Whistling Bagpipes."

Many dozens of books were eventually published, well into the 21st century, with the older books revised over the years. All are credited to the pseudonym Carolyn Keene, though in fact they were written by a number of authors.

The Nancy of the books was an astonishingly self-possessed (if a tad bossy) creature who traveled around the country and the world, solving mysteries in her smart sportswear. Now, in Andrew Fleming's winning movie, she's been transplanted to what seems like another planet: contemporary Hollywood High. With her father, attorney Carson Drew (Tate Donovan), Nancy's moved to L.A. where mysteries await, along with sneering girls who don't understand the appeal of penny loafers. Of course, boyfriend Ned Nickerson (Max Thieriot), the sort of boy who always looks freshly showered, turns up as well — not that Nancy needs any help taking care of herself, thank you very much.

While the mystery itself (involving a dead starlet and a will) is fairly pedestrian — and possibly a bit involved for the movie's tween-and-younger audience — the movie is breezy and fun; a knowing wink at the Nancy Drew of the past. This Nancy is a throwback, but a charming one, and Roberts (Julia Roberts' niece) plays her with an irresistible sweetness.

Jeffrey Kurland's snappy little costumes are a kick (an awestruck saleswoman calls Nancy's look "the new sincerity"), and it's fun for girls to watch a movie in which one of their own saves the day — with perfect manners, no less. "It really gets my goat when someone tries to kill me," Nancy pouts prettily, after a botched attempt to get her off a case for good. "It's so rude."