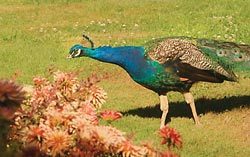 This curious peacock is just part of the menagerie of chickens, goats, ducks and other peacocks at the farm. Waller says the creatures all seem to get along. (MIKE SIEGEL / THE SEATTLE TIMES)
By Valerie Easton

Greg Graves was just out for a lark with his friend, Linda Plato, helping her dig some topiary at a farm near Orting. The place was for sale by an overwhelmed garden-art and junk collector who couldn't keep up with an old house and three acres. That was Dec. 10, 2004. By the end of the year, Graves and his partner, Gary Waller, had bought the place, captivated by the charm of the century-old farmhouse, gardens, pasture and mature trees.

Before the topiary expedition, and Waller's magical first visit on a foggy Christmas Eve, the men had no plans to move. They definitely weren't looking for acreage in Orting. Both worked north of Seattle, Waller as a floral designer at Molbak's in Woodinville, and Graves as head gardener at the Miller Botanical Garden in Shoreline. They'd worked long and hard on their award-winning garden at their home on Capitol Hill.

Yet 2 ½ years later, they're happily settled into Old Goat Farm, caring for dozens of animals and running a little specialty nursery. Waller left Molbak's for the more-than-full-time job of propagating nursery stock as well as farming. He plants all the containers, and both men garden and run the nursery.

Much of the farm infrastructure, including the charming old barn, was already in place at Old Goat Farm. The huge vegetable plot was fenced with espaliered apple, plum and pears. Outbuildings, clipped hedges and vast old trees with mossy trunks defined the beds and borders.

Now Old Goat Farm boasts 40 chickens, six ducks, angora goats and peacocks. Despite the birds' impressive display of plumage and preening, especially by a white male peacock with stunning blue eyes, Waller says the assortment all get along together. Phyllis Diller is a white Polish chicken with a silly topknot of feathers; Bill Blass is the handsomest rooster; Hedda Hopper and Gertrude Jekyll join him in pecking around the barnyard.

Despite all the maintenance in caring for plants and animals, the guys set right in on projects. They cleared out the blackberries behind the chicken yard, planting maples and a hedge of shrub roses for summer and fall color between the farm and the forest.

Being the compulsive gardeners they are, Waller and Graves brought 25 truckloads of plants with them. "It was wall-to-wall plants around here, a starter kit for the garden," Graves says with a chuckle. They set in rejuvenating the old garden beds, digging out shrubs past their prime and an invasion of mint. "It's such a different aesthetic than our city garden," says Graves. "Here we do big sweeps of plants. It's kind of messy; this isn't precision gardening." They've already planted at least 60 kinds of hostas, and are plugging in fresh plants throughout. What could persuade a city boy to move to Orting, let alone drive 100 miles round trip to work? Graves looks around his three cultivated acres and says simply, "This is plant-geek heaven."

Valerie Easton is a Seattle freelance writer and author of "A Pattern Garden." Her e-mail address is valeaston@comcast.net. Mike Siegel is a Seattle Times staff photographer. 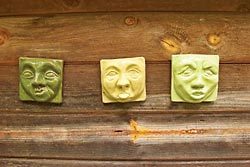 Three terra cotta sculptures, representing the changing faces of gardeners, hang on the side of the well house in Linda's Garden at Old Goat Farm. (MIKE SIEGEL / THE SEATTLE TIMES) 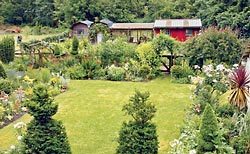 From the old farmhouse, the view stretches across the back lawn and out to the vegetable garden, which is framed in espaliered fruit trees. (MIKE SIEGEL / THE SEATTLE TIMES) 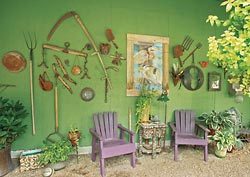 A shady sitting area against one wall of the old barn is a perfect place to display some of the old tools that came with the farm. (MIKE SIEGEL / THE SEATTLE TIMES) 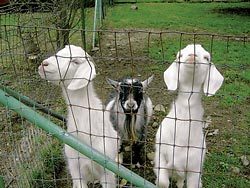 Angora goats are just part of the animal array at Old Goat Farm, where chickens, ducks and peacocks also strut and stroll about. (MIKE SIEGEL / THE SEATTLE TIMES) 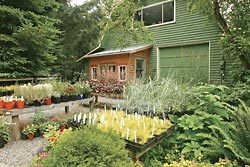 Graves and Waller propagate 85 percent of the plants they sell in their little nursery. The old green barn serves as perfect backdrop for the wide variety of unusual and rare plants. (MIKE SIEGEL / THE SEATTLE TIMES) 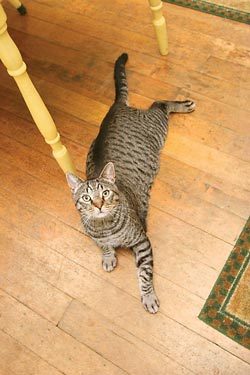 The men adopted many of the farm animals when they bought the place, including a three-legged cat. Tripod, who used to sleep outside under the blackberry bushes, now sleeps indoors on the bed. (MIKE SIEGEL / THE SEATTLE TIMES) 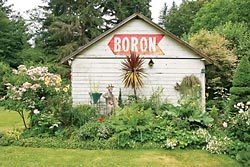 The original old goat statue, which came with Greg Graves and Gary Waller from their Capitol Hill garden, holds pride of place in the midst of luxuriant foliage plantings. (MIKE SIEGEL / THE SEATTLE TIMES) 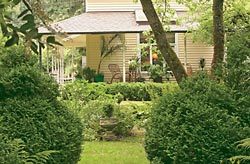 A wide, covered porch wraps around the farmhouse in Orting. The ornamental gardens are delineated by mature trees and clipped hedges. (MIKE SIEGEL / THE SEATTLE TIMES) 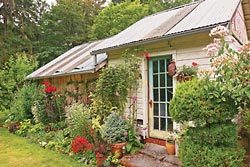 The planting style at Old Goat Farm is unabashedly romantic, as in this pink, red and purple border softening a shed built in the early 1900s. (MIKE SIEGEL / THE SEATTLE TIMES)
In memory of a friend

Greg Graves' dear friend, Linda Plato, died a year after they found Old Goat Farm together on a topiary-scavenging expedition. At the farm, he's now creating a memorial garden honoring her love of topiary. Graves has filled Linda's Garden with paths and dozens of plants, some moved from Plato's own garden. All the plants are ideal for shearing into the balls, cones and cylinders that were her signature look. The topiary collection includes:

The entire farm is open to the public on June 16 and 17, or by appointment. See www.oldgoatfarm.com for a schedule and directions.