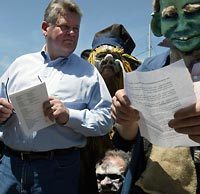 So all is right again in the neighborhood billed as "the center of the universe." The historic Fremont bridge has reopened. The famous "Waiting for the Interurban" statue has returned.

Just in time for the summer tourists and the anxious shopkeepers who await them.

Just in time for the coming Solstice Parade and its naked bicyclists.

That was all the more reason to celebrate Saturday as folks in Fremont threw an outdoor bash, bringing in Mayor Greg Nickels for the ribbon-cutting and turning the neighborhood into one big block party.

Fremont and Queen Anne residents turned out, dancing and celebrating around the bridge and on the sidewalks to drumming and live music.

No one looked happier than the shopkeepers who had fretted over lost revenue because three of the four lanes on the bridge were closed during the yearlong construction.

"People are very excited in the neighborhood, anticipating that business will get back to usual," said Lisa Myers, owner of Capers, a furniture store near the bridge.

Several shop owners admitted their businesses might have taken a bigger hit if the city hadn't spent $6.5 million on new traffic signals and other initiatives to minimize traffic delays.

The bridge, crossed by about 33,000 vehicles a day before construction began, serves as a gateway to this neighborhood north of the Lake Washington Ship Canal.

On Saturday, for the first time since the project began, Metro buses resumed their routes over the bridge, but bicyclists must wait to use the trails beneath it.

Still to come: The bridge will be closed a few nights and weekends so construction crews can complete mechanical and electrical upgrades underneath.

The span opens about 35 times each day, making it one of the world's most active drawbridges. Before construction began, the 90-year old bridge had outlived its structural life, and both approaches needed replacing, city transportation officials said Saturday.

The project, which cost $42 million, was largely finished and the bridge mostly reopened before Memorial Day weekend, and last week the "Interurban" statue, which was relocated during the construction, returned to its perch near the north end of the bridge.

Lion dancers from the Mak Fai Washington Kung Fu Club, left, join trolls in dancing on the deck of the Fremont Bridge after a ribbon-cutting Saturday signified the re-opening of the strengthened structure linking Fremont and Lower Queen Anne. (ALAN BERNER / THE SEATTLE TIMES)