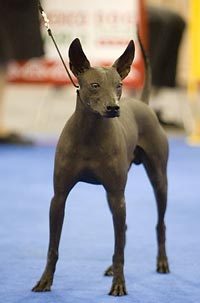 The hairless Xoloitzcuintles date back to the Aztecs. (EDUARDO VERDUGO / AP)
By TRACI CARL
The Associated Press

MEXICO CITY — The star of the World Dog Show is not the soulful Labrador, the bulldog with attitude or even the manic Chihuahua.

This year, the hairless Xoloitzcuintles (show-low-ee-SQUINT-lees) are stealing the show in their native Mexico. Sleek with batlike ears, the rare breed looks more like a cartoon character than a canine. But its history dates back to the Aztecs, and it has a special allure for asthmatics or those who just don't like cleaning up after a shedding dog.

Nicknamed "Xolos" by breeders and known in Mexico as "Itzcuintles," the breed has yet to come into its own. But the dogs are becoming more popular around the world, and can sell for up to $2,500 for a show dog. Past owners include the Mexican artists Diego Rivera and Frida Kahlo.

Breeders say Xolos were on their way to extinction in the 1940s when a group of Mexicans began searching for the dogs in remote, mountain villages and forgotten desert outposts, building a breed that numbers around 5,000 worldwide today.

Patty Hoover, a breeder from Selah, Yakima County, said she began breeding Xolos almost 20 years ago because she "married a man who didn't like dog hair on the floor."

There weren't many other Xolo owners around when she started, but that is changing.

Some 70 Xolos are competing in this weekend's World Dog Show. It remains to be seen whether the Xolo selected as best of breed can hold its own against the more than 5,000 dogs and 300 breeds competing for best of show.