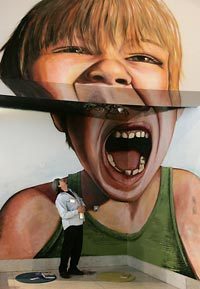 When Seattle Art Museum opens the doors to its light-struck new expansion Saturday, it will be cause for celebration -- and reflection.

Within a decade, in a whirlwind of fundraising and construction, SAM has raised more than $200 million to fuel an intensive growth spurt that culminates with the dedication of its airy new downtown venue. The expanded building dramatically increases the museum's space for exhibitions, education and community gathering.

From a glass-encased lobby with its time-lapse explosion of cars overhead, to spacious new galleries upstairs, SAM has put an emphasis on natural light, public space, an open floor plan and maximum exposure of the treasures it owns. Out of storage come African masks, a Warhol portrait, the museum's beloved Japanese Crow screen and nearly 1,000 pieces of porcelain.

The museum expansion included the development of the Olympic Sculpture Park, which opened in January. With so much additional indoor and outdoor space, the museum has already been able to attract bigger and better gifts from its patrons. It recently announced that it received nearly 1,000 new works of art valued at more than $1 billion.

That success didn't come without compromise, however.

In order to pull off the expansion so quickly, SAM partnered with Washington Mutual in an intricate business deal that gave SAM an immediate financial boost and extra exhibition space. WaMu got some prized downtown real estate for a new 42-floor office tower.

Now the two institutions are melded together in a conjoined building that slips into the downtown skyline with scarcely a ripple.

But in an age when museums around the world are erecting architectural landmarks to cement their public image, SAM gave up a critical chance to build an iconic, freestanding museum.

With a collection that ranges all over the map and a main building subsumed into an office tower, how does SAM define itself?

"Well, that's a challenge," she replied, pausing. "It's a very good question."

When Seattle Art Museum opened in 1933, identity was not an issue. The museum grew from the vision and family fortune of Seattle philanthropist Richard Fuller and his mother, Margaret MacTavish Fuller. The Fullers hired Seattle architect Carl Gould to build a gracious Art Deco-inspired museum in Volunteer Park to publicly display their personal collection. In return, the city agreed to maintain the building.

Born as a contained boutique museum, SAM had a distinctive profile -- complete with stone camels outside the door -- and a signature collection of Asian art.

Richard Fuller oversaw the museum with a small staff that at times included some of the region's best-known artists: Kenneth Callahan, Guy Anderson and Morris Graves, among them. Fuller expanded the collection to include a broader range of artwork, buying freely and accepting some gifts: early European art from the Samuel Kress collection; modern art from Seattle dealer ZoÃƒÆ’ÂÂ« Dusanne, heiress Peggy Guggenheim and others; and porcelain collected by the Seattle Ceramic Society.

Putting artists on the payroll was just one way Fuller had of supporting Northwest talent. He also regularly showed the work of local artists, gave them money, bought generously, and took over hosting the Northwest Annual exhibition -- a tradition begun by the Seattle Fine Art Society, which merged into SAM.

After the 1962 Seattle World's Fair ended, SAM took over space at Seattle Center, where it operated the Seattle Art Museum Pavilion and engaged the broader world of contemporary art. But by the 1960s, Fuller's gentle dictatorship of the museum was beginning to represent the past to some museum trustees.

When Fuller retired in 1973, things changed rapidly. The museum began charging regular admission for the first time. And with the enormous success of the blockbuster 1978 King Tut show at Seattle Center, the board began serious planning and fundraising for a downtown expansion.

When SAM leaders hired high-profile architect Robert Venturi, they figured he would give them the kind of drop-dead building that would take over magazine covers, a postmodern icon for the city. But by the time SAM's new building opened in 1991, some quibbled that its decorative exterior already seemed dated.

Functionality, too, was an issue from the start. No matter that Venturi won the prestigious Pritzker Architecture Prize that year. Critics of the new SAM complained about cramped galleries and a "Grand Stairway" that went nowhere.

SAM then renovated its Volunteer Park museum and reopened it in 1994 as the Seattle Asian Art Museum. At that point, with its eclectic main branch downtown and a scholarly Asian wing in Volunteer Park, SAM defined itself as "a collection of collections." The energy of the institution went into wooing new donors. But in order to attract gifts of art, you need room to display them.

In 1999, only eight years after opening the Venturi building, the museum's board voted unanimously to expand again.

At that point, SAM had already committed to building a sculpture park downtown, so the board was looking at least 20 years out. By then they expected the museum to cover the entire block between First and Second avenues, Union and University streets, on property the museum owned. "At that moment it was a master plan, very abstract," director Gates recalled. "Knowing we were working on the sculpture park, our expectation was that it would be very difficult to expand."

Then an unforeseen offer appeared.

"When WaMu came to us in 2001, it came as a surprise," Gates said. "It was right after 9/11, the economy was faltering, we were struggling to raise funds for the park and there was no precedent for a museum and bank building in tandem. Was it in the interest of the community? The interest of the museum?"

The board decided it was.

SAM's new addition spills into its old Robert Venturi-designed building at First Avenue and University Street and takes up the first four floors of a 16-floor building designed by Portland architect Brad Cloepfil. It provides 5,000 feet of new public space and 70 percent more gallery space, an upscale gift shop and full-service restaurant. Cloepfil's building shares a wall with the taller bank tower, designed by Seattle-based NBBJ. Each has its own main entrance: SAM's on First Avenue, WaMu's on Second.

Over time, as more space is needed, SAM can move upward into space already paid for: It owns the eight floors above the four it now occupies. The museum leases the floors it doesn't yet occupy to WaMu, and WaMu owns the top four floors of the museum building in addition to its office tower.

Normally, the museum couldn't have taken on the expansion and the park project at the same time.

"This thing fell out of the sky," SAM trustee Charlie Wright said after the deal was struck. "The museum gets the space [it needs] in the short term and then the rest is basically free. ... The whole sort of unavoidable magic of the business deal was something you couldn't turn away from." It's the kind of decision museums are facing around the country, said Marjorie Schwarzer, professor of museum studies at John F. Kennedy University in Berkeley. "The only way you can raise funds is to get bigger -- that's the way the whole American economy is set up," she said. "Sustainability is what's motivating it."

As yet, though, no other prominent art museum has chosen to merge its image with an office tower. The closest comparison, Schwarzer believes, is New York's Museum of Modern Art, which sold airspace over its midtown Manhattan museum for a condominium project that helped finance its 1984 expansion.

So, how does SAM distinguish itself in that competitive field?

Gates sums up her thoughts on SAM's identity this way: "The fact that we are one museum in three locations is very distinctive to us -- and the fact that our collections provide a global perspective and interconnected view of history ... "

That sprawling profile is a long way from the intimate art experience first envisioned by the Fullers. The SAM of 2007 offers art of every era; downtown shopping and dining; extensive education programs for families and schools -- even a free night for teens.

"SAM is trying to get all these different players at the table, to become a signature metropolitan museum, to position itself within a city that's changing and becoming more of a world city," Schwarzer said. "I wonder what Mr. Fuller would have thought? I wonder if he would be tickled?"

Working art Hammering Man, in front of the Robert Venturi-designed portion of SAM, with the WaMu Center and SAM's new wing rising behind it. (ALAN BERNER / THE SEATTLE TIMES) 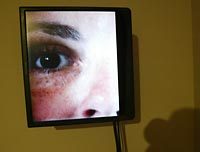 About face "House of Cards," a video/sound installation by Gary Hill, examines a face, moving from a tight image of the eyes, down to the mouth. (ALAN BERNER / THE SEATTLE TIMES)

Natural disguise A Melanesian mask from New Guinea is made of rattan, shells, feathers, wood and pigment. (ALAN BERNER / THE SEATTLE TIMES)

With a new home and new art, will museum gain new profile?

Three things we love at the new SAM

A bank and art museum's marriage of convenience

The new SAM: the architecture