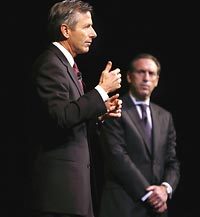 After two years on the job, the former grocery-store executive says Starbucks has a faster pace than his previous companies. He spends nearly half his time traveling, but that doesn't keep him from running and playing basketball and sending tens of thousands of hand-signed notes to employees each year.

In an interview the day after Starbucks' annual meeting last month, Donald, 52, talked about Starbucks' international growth and his role at a company that has gotten negative attention lately.

With a hint of a Southern accent that might come from Tampa, where he grew up, Donald conveyed both urgency and sincerity about keeping Starbucks' original character even as it aims for 40,000 stores worldwide.

Here is an edited version of the interview:

Q: You are overseeing Starbucks' fastest growth ever. How does that make your job different from your predecessors, Howard Schultz and Orin Smith?

A: The difference is that now we're moving quickly every day. To retain the heritage and the history of this company, it is work to reach out and connect, to hire, to train, to keep the coffee culture within this company. [Pointing to a pile of letters:] These are personal notes I'm signing for partners [employees] in the U.K. I do this a lot — 33,000 times last year. I sign every note, so they know that it's authentic. We have to do these things so that in the U.K., Maxine [to whom the letter on top is addressed] says, "Hey, this still is a small company."

Q: What do you want to be known for at Starbucks?

A: I'm just trying to keep it small as we grow. I've always said, in whatever job I had, that I'd know I was successful if the day I died, all the front line [employees] came to the funeral. To me, that's a sign of success

Q: What's the most important lesson Starbucks has learned about entering new countries?

A: Enter with a partner that understands and is from that country, No. 1; No. 2, enter with a partner that's in a business that's similar to us, serving customers in a small box, restaurant-type setting. The third thing is to make sure we augment the country's introduction to Starbucks with partners who have been at the company for a while so they can help with the immersion of Starbucks in foreign countries.

Q: How long are they there?

Q: This year, Starbucks is opening its first stores in India and Russia, countries where, unlike the United States, many millions of people can't afford even an occasional latte indulgence. How will that affect the way Starbucks does business in those countries and which part of the populations it will appeal to?

A: We've learned that in opening stores in countries around the world, particularly in China, that it's more than just a beverage. It's a place to go, a place to see people, to be seen. It's a place to get away from their — just like it is in the U.S. — current surroundings. And third, it is the beverage.

In the U.S., it might be flip-flopped, where it's the beverage then the third place. That's the real advantage, it's being there as a gathering spot.

Q: Starbucks executives have long talked about the company's growth potential in China. If Starbucks' Forbidden City store closes as some critics in China want, what effect will it have on the company's expansion plans?

We're there because they asked us to come in, and we went there with all the respect for the culture and the heritage and history of the Forbidden City.

Wherever we're opening stores — in neighborhoods in the U.S. or neighborhoods and provinces in other countries — we do the same thing.

Q: After the newness wears off, how do you maintain excitement about Starbucks in a country where people traditionally prefer tea?

A: What we're finding in China is that there's a sweeter palate. Those customers are telling us what they want in line. So it's not necessarily just coffee, but "coffee plus," "coffee with," "coffee and."

Our first beverage we served in Chengdu was a caramel macchiato — the very first one we served. That just kind of shows you where taste profiles are, and they differ by country.

Q: Which foreign country will have the most Starbucks stores in five years?

A: I'll tell you the region: Asia-Pacific, for sure. But the opportunities in Europe are just as great, particularly filling in the U.K.

We're going to take a very thoughtful approach to opening in new countries based upon the time that we want to invest in those, making sure we do what's right in our existing countries.

Q: Does that mean you'll be opening in fewer new countries?

A: We don't want to say "x" amount of countries on the upside or on a few-country basis because, again, we're finding that opportunities to fill in are greater than we thought. I think we have 30 stores now in Paris, so I think there's an opportunity for more. But we want to do it right, do it thoughtfully, make sure we're doing it respectfully and honoring all the coffee traditions.

Q: Now that Starbucks has opened its first store on the African continent — in Egypt last fall — how quickly will it grow there?

A: Our partner is the Mohammed Alshaya Group, and we will, through him, look at the opportunities in that continent to determine where is best suited for the retail business and for Starbucks. So it's hard to say. It's not anything that sits on our screen now in terms of retail stores. Obviously in terms of coffee procurement, we're doubling in East Africa.

Q: Why did you choose Alshaya, which has opened Middle Eastern stores for Starbucks, as your partner in Russia? Why not a Russian partner?

A: We interview different partners and all kinds information is gone through to determine who makes the best partner. In this case, Mohammed and his team won out on that, based on previous experience they had with retail there. We also look at, as we grow internationally, if we can, to limit the amount of partners, because that means we don't necessarily have to take other partners through immersion.

Q: Does Starbucks suffer in any way when international sentiment turns against the United States?

A: All over the world, our stores take on the community through our partners and through the people that are there. Regardless of Starbucks being located in Seattle, Wash., it becomes their Starbucks store.

When the bombings in Lebanon caused us to close our stores, our partners — which are part of the Alshaya Group — were hellbent on opening those stores to provide the citizens of Lebanon a place to go, a place to congregate.

It really becomes their Starbucks in their country staffed by partners who live in those communities.

Q: How often do you travel?

A: I was in 12 countries last year and about 25 states. If you wanted a breakdown as a percentage, I use pie charts to determine how much time I travel, how much time I work with [supplier] CEOs, how much time I spend with my team. Last year was about 45 percent travel.

Q: Have you used pie charts at every job you've had?

A: I did it as chairman of Pathmark, but not to the degree I need it here. I also do it on the time I spend with my direct reports [executives], because my direct reports will say, "Hey, you never have time for me anymore." Not true!

My time is their time. My wife has a little sliver here; it's about one-half of 1 percent.

Q: How does she feel about that?

Q: Are Starbucks' international stores more or less profitable than its U.S. stores?

A: The four-wall profit — the profit of a store with all the overhead out of it — is pretty similar. But our investment to go from 3,500 stores to 20,000 stores [internationally] is greater than in the U.S. now, because the infrastructure has been built for a while here.

A: If we develop a thick skin to these issues, I think we fail.

A: Unfortunately, when we get mischaracterized, it's not the truth and we really get mad about it.

Now you're right, investors say, "What about sales? What about profits? What about margins?" That's what they want to know. Our customers are just saying, "Yeah, I see my latte. I need to get out of here."

Where it really affects this company is, our partners [employees] know the kind of company we are, and any time that we have to defend ourselves, not necessarily publicly but internally, we do, and it takes time.

It's OK to be sensitive. It's OK to get a little rumbling in your belly before you get up to talk to 5,000 people. It means you care, you're concerned, you want to do what's right. If you just said, "Who cares what they say? It's not the truth," that doesn't work, not in a company that's connected to its partners like we are.

Starbucks President and CEO Jim Donald talks about his job and the company's growth, including plans to expand from more than 3,500 international stores to 20,000. Donald joined Starbucks in 2002 and succeeded Orin Smith as CEO on April 1, 2005. (DEAN RUTZ / THE SEATTLE TIMES)

Deep grocery roots: Began as a trainee with Publix Super Markets in 1971. Moved in 1976 to Albertsons, where he held several jobs, including head of its Phoenix operations. Joined Wal-Mart in 1991 and was a key player in developing and expanding Wal-Mart Super Centers. From 1994 to 1996, served as president of Safeway's 130-store eastern division. In 1996, became chairman and CEO of Pathmark Stores, an East Coast chain that he led through a bankruptcy reorganization in 2000 from which it emerged as a publicly traded company.

Starbucks career: Joined in October 2002 as president of its 4,500-store North American division. Tapped in the fall of 2004 to succeed Orin Smith as CEO effective April 1, 2005.