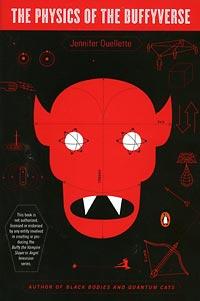 Jennifer Ouellette is a modern girlie girl with a closet full of shoes, a pink Razor cellphone and a huge obsession with ... astrophysics?

That's right. This Seattle Pacific University alumna has become, rather by accident, a nationally recognized science writer and an invaluable liaison between hardcore physics scholars and the average Joan.

In both her long-running physics blog, "Cocktail Party Physics," and her first book, "Black Bodies and Quantum Cats: Tales from the Annals of Physics," Ouellette uses pop-culture metaphors to explain complex topics in modern physics — astro- and otherwise. She references Magneto of Marvel Comics to explain magnetism, Fabio to explain the physics of roller coasters and Tarot cards to illustrate the dynamic probabilities of our physical universe.

Her second book, "The Physics of the Buffyverse" (Penguin, $15), published last month, follows the same formula. Only this time, Ouellette employs a rather more offbeat metaphor: The popular TV series "Buffy the Vampire Slayer" and its spinoff, "Angel."

At first glance, it's a pretty tough sell. Especially considering that the plot lines of both "Buffy" and "Angel" hinge on the idea that vampires and demons regularly bubble up from the underworld and must be rebuffed by a ragtag clan of high-school hotties who, when they're not battling evil, are like totally worried about prom. Not exactly fertile ground for the staunch realism of modern science, right?

But against all odds, Ouellette pulls it off.

In one particularly enticing chapter, Ouellette recounts the time that Buffy, our starring demon-slinging blonde, crosses into another universe to relate the potentiality of a tear in the time/space fabric. While I wouldn't recommend bringing up references to special relativity in "Buffy" episodes on a first date, the book is a great way to commune with your inner nerd.

As an English major and one-time physics-phobe herself, Ouellette writes in a style that is both charmingly accessible and non-condescending.

"Not knowing the basics of physics doesn't make you stupid," Ouellette explains. "I know lots of very educated people with advanced degrees, who speak many languages, and they don't even know what Schrodinger's cat is."

But by not assuming any prerequisite knowledge of her readers, Ouellette's work is evidently infuriating to some people within the scientific community.

One physicist wrote a 26-page critique of Ouellette's first book, pointing out every chapter that he believed to be wrong.

"These are really, really, really complicated concepts" — wormholes, quantum physics and multiverses, to name a few — "but I just give people the big picture of what's going on," she says. "The stuff he cited wasn't wrong. It just didn't include all the detail and complex equations that he would have liked."

Beneath her occasional ditz-talk — or "Buffy-speak" as she calls it in her book — Ouellette herself is actually a very smart cookie. Science-savvy enough to swap shop with the big dogs, Ouellette travels regularly to physics conferences across the country, receiving awards and notoriety for articles, which cover everything from the acoustics of Mayan pyramids to that thing that happens to your speakers right before your cellphone rings.

Right now, Ouellette is in the process of moving from Washington, D.C., to Los Angeles, where she'll live with her science-y, cosmologist fiancé ("I know, isn't it a match made in heaven?" she says). When she's not keeping up her prolific blog and freelancing for an array of science journals — articles in "New Scientist" and "Nature" are forthcoming — this black-belt in jujitsu is planning a lecture on "The Physics of the Fight" (based on the eponymous chapter in "Buffyverse"), complete with a jujitsu demonstration.

She's also embarking on her third book, which she describes as "more straight science," sans vampire metaphors. But take heart, physics-phobes: It'll have the odd pop-culture reference, too. Ouellette blames her predilection for entertaining metaphors on what she calls her "humming bird brain."

"I lose focus really easily. It's like, 'Ooh! something shiny!' and I totally forget what I was doing," she laughs. "When it comes to physics, it's the same. You could sit there and talk to me about sine and cosine and blah blah blah, and I'm gone. But if you start talking about Buffy and Spike and portals? I'm there."

But why Buffy? Of all occultish, cultish pop-phenomenon, why use vampires and demons and ditzy blond cheerleaders to explain, say, String Theory?

Because Buffy flaunts the stereotype, Ouellette explains. Buffy is both high-school hottie and a smart, science-savvy, martial-arts-wielding take-no-prisoners girl. She likes the mall and she's smart.

"There are all these stereotypes for smart women in science," says Ouellette. "They think you have to be all professional and serious."

"I'm really into physics and I love my Prada handbag. Come on, people," she laughs. "Get with it."