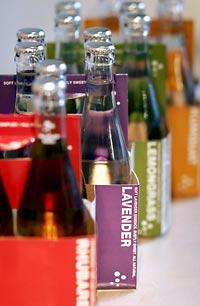 After having four children, Sharelle Klaus had spent too many months of her life without wine.

She wasn't happy with the nonalcoholic alternatives during her pregnancies — Coke, water, iced tea — so after her youngest child turned 1, she set out to create a better drink: Dry Soda.

Klaus spent much of 2005 mixing thousands of samples in her Tacoma kitchen before settling on four lightly sweetened flavors — lavender, lemongrass, rhubarb and kumquat — that are now sold in 12-ounce bottles at some of the swankiest restaurants in Seattle and California.

Dry Soda is sweeter than a seltzer but more subtle than a sparkling juice like Izze. Klaus sees Dry Soda as a wine substitute that complements certain foods. She recommends restaurants charge $5 to $7 a bottle and serve it in champagne flutes.

"I wanted people who weren't drinking to feel special and important, too," Klaus said. "When someone opens you a Coke, it's not that special."

Dry Soda is bottled in Los Angeles, where restaurants like Il Grano sometimes include it in wine tastings or use it as an aperitif.

Dry Soda has taken a while to catch on at Dahlia Lounge in Seattle, which sells about 48 bottles a month.

"It's kind of an acquired taste," said R.E. Mason, a manager there. He's seen customers send it back because they were expecting more flavor.

Seattle chefs seem to have acquired a taste for it. One recently floated a cucumber sorbet in the lemongrass flavor, while another marinated duck in the kumquat soda.

Whole Foods now stocks it in 28 stores in the West, including Seattle. Dry Soda also sells the bottles at other grocery stores and wine shops, and from its new headquarters near Pioneer Square.

With just 11 employees, the company until last fall was based in Klaus' home, which some employees dubbed "Dry Towers." Now she and her family have a new home in Madrona, a short commute from Dry Soda's new 2,800-square foot headquarters at the corner of First Avenue South and South Jackson Street.

Klaus, 37, has worked as an airport consultant, the founder of a now-defunct online community for children called PlanetSquid, and president of the Forum for Women Entrepreneurs.

"That's the most significant attribute," Klaus said. "I wanted people to know it was going to be much less sweet than other sodas."

Klaus launched Dry Soda in 2005 with a home-equity loan and a U.S. Small Business Administration loan.

Last May, she raised $1.5 million from 26 investors in New York, California and the Seattle area.

A couple miles north of Dry Soda is the headquarters of Jones Soda, which has become a national phenomenon with its hip bottle labels and unusual flavors. That company continues to innovate as well, branching into energy drinks and organic teas.

In the midst of all that competition, carbonated soft-drink volumes are falling while products such as bottled water gain, according to industry consultants Beverage Marketing Corp.

Given the heated market, Klaus does not plan to sit still.

Next month, she will approach investors for $2 million more "to get us through the rest of our western U.S. expansion and into some strong national chains."

And Klaus is thinking about future flavors, possibly basil or juniper berry.

"I didn't think the world was ready for basil soda when I first started," she said.

"But now that we've introduced them to the concept of culinary sodas, now they are."

Can afford to buy them all

Japanese mega-chain Daiso plans a grand opening Saturday at noon for its Westlake Center "100-yen" store. The downtown Seattle store — Daiso's fourth location here — features over 3,000 items, most priced at $1.50 apiece. With more than 2,400 stores in Japan and 400 in other parts of Asia and the Middle East, Daiso designs and manufactures most its items, keeping down costs. The store's appeal: Everything from its dishes to notebooks feature aesthetically pleasing (and cute) Japanese designs. The Hiroshima-based company opened its first U.S. location at Alderwood in fall 2005. It plans to eventually open 20 stores in the region. — MSO

Of those who received gift cards during the 2005 holiday season, more than 25 percent waited until December 2006 to redeem them, according to consumer-trends tracker Corporate Research International. This spells bad news for retailers who rely heavily on holiday sales, especially as gift cards grow in popularity. More than 67 percent of consumers received at least one card this holiday season, while people surveyed gave an average 4.5 cards, the firm said. — MSO

Starbucks quietly added an average 20 cents to the price of Mocha Frappuccinos on Jan. 3, bringing them in line with Caramel Frappuccinos. The increase came three months after Starbucks announced its first price increase in two years — a nickel on barista-made beverages. The new price "better reflects the value of a Mocha beverage by placing it in the appropriate pricing tier with like beverages," spokesman Brandon Borrman said in an e-mail. A 16-ounce Mocha Frappuccino in downtown Seattle now costs $3.75 before tax. — MA 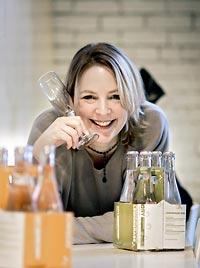 What would a wine substitute be without ideas for food pairings? Here are Dry Soda's suggestions for enjoying meals with a bottle of its nonalcoholic bubbly: