The iPhone is displayed at Macworld in San Francisco. Cingular Wireless will sell the device for $499 and $599. (DAVID PAUL MORRIS / GETTY IMAGES)
By Glenn Fleishman
Special to The Seattle Times

SAN FRANCISCO — In a matter of 90 minutes Tuesday, Apple Chief Executive Steve Jobs confirmed years of rumors about Apple handheld devices and cellphones when he previewed the much-anticipated iPhone.

It turns out the gadget many expected to be a combination phone and iPod is really a smartphone, a device that combines Apple's operating system with Internet access, Wi-Fi, mobile-phone capabilities, iPod music features and numerous other attributes.

Quoting computer pioneer Alan Kay, an early mentor, Jobs told the annual Macworld Expo: "People who are really serious about software should make their own hardware."

Jobs, who made the announcement in his annual keynote to kick off Macworld, said the phone will ship in June in the U.S. The European introduction is set for the third quarter, and Asia's for 2008.

Analyst Tim Bajarin, president of Creative Strategies, and a longtime Apple watcher, said the iPhone is Apple's attempt to redefine the cellphone market.

"When Apple goes after something like this, they tend to do it not only in a more elegant way, but in a more robust way," Bajarin said.

Jobs also introduced the Apple TV, a device previewed in September as iTV. It's Apple's entry in a growing category of products designed to connect PCs with televisions to deliver digital videos and other content.

But it was the iPhone that caught the attention of the Macworld audience.

By using the Mac's OS X as its operating system, the iPhone would compete with the four dominant smartphone systems on the market from Microsoft, Symbian, Palm and Research in Motion.

The phone will be sold by Cingular Wireless, with Apple aiming for a 1 percent share of the cellphone market — or 10 million units worldwide — in 2008.

Cingular CEO Stan Sigman said his company signed on without seeing a prototype of the phone because of its confidence in Apple.

The iPhone will sell for $499 for a version with 4 gigabytes of flash memory and $599 for the 8-gigabyte model. No mobile service plans were disclosed.

A key to the phone, Jobs said, is that Apple is developing its own mobile-phone platform.

"It allows us to create desktop-class applications and networking, not the crippled stuff you find on phones," he said.

One notable feature is the touch display on the phone's 3.5-inch screen. Jobs said a touchscreen bypasses the awkwardness and limitation of smartphones with tiny keyboards.

"It's far more accurate than any touch display that's ever been shipped," he said. "And boy have we patented it," he added to audience laughter.

Yahoo! has partnered with Apple to provide a key feature that makes the phone competitive with Research in Motion's BlackBerry: e-mail that can automatically go to the phone via Wi-Fi or a cell-data network from a company's servers, a technology called push e-mail.

"It's like having a Blackberry without the Exchange server," said Yahoo! co-founder Jerry Yang, referring to Microsoft's corporate-mail product to which BlackBerry push e-mail can be added.

Yahoo! will use IMAP, an e-mail standard that's commonly found in larger companies for retrieving the content of messages while leaving them stored on a central e-mail server.

Another partner, Google, will supply mapping software and be available alongside Yahoo! as default search engines on the phone.

It also has a 2-megapixel camera and sports a sleep/wake button and standard iPod connector for use with existing peripherals and cables.

The one limitation may be the phone's introduction as a GSM phone with EDGE data networking, which runs at speeds of up to about 150 kilobits per second (Kbps).

Cingular operates faster third-generation (3G) data networks in the U.S. that operate at up to 700 Kbps. Jobs promised future 3Gversions of the phone.

While the phone includes Wi-Fi, it would not be capable of making phone calls over a Wi-Fi network, a feature carrier T-Mobile USA is testing in Washington with its HotSpot@Home service.

Jobs' giddiness at introducing the phone was evident. After demonstrating a mapping feature that allowed him to find a Starbucks a block away from the keynote venue, he placed a call to an apparently unsuspecting barista,

The TV sports a 40-gigabyte hard drive and can synchronize music and video libraries with one computer over a network. It can stream content from up to five computers.

The synchronization feature will allow music or video purchases on one computer to move automatically to the Apple TV. After a user makes the purchase, the files would transfer in the background to the Apple TV's hard drive.

Apple engaged in its usual Microsoft baiting, showing a new "I'm a Mac, I'm a PC" advertisement in which actor John Hodgman in a hospital gown awaits his upgrade to Microsoft Vista.

Hodgman described some of the requirements for upgrading existing computers and, on parting, told the "Mac" if he didn't come back, the Mac could have his peripherals.

Jobs showed on screen a now infamous e-mail quote introduced during a Microsoft antitrust trial from Jim Allchin, a retiring Microsoft executive who has led Windows development for years: that he would purchase a Mac if he didn't work for Microsoft.

"I have alerted our Seattle stores" to Allchin's impending retirement, Jobs said.

Glenn Fleishman, a free-lance technology writer in Seattle, is one of the Practical Mac columnists whose work appears regularly in the Personal Technology section. 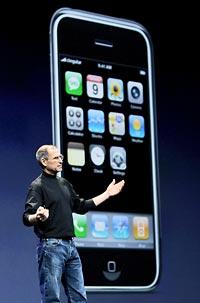 Apple CEO Steve Jobs shows off the iPhone on Tuesday. It combines a phone, iPod features, a widescreen with touch controls and an Internet device for e-mail, Web browsing and search. (PAUL SAKUMA / AP)

• As part of the company's new focus, Jobs said the company will no longer be known as Apple Computer, but simply Apple.

• Cisco, which holds a trademark on the iPhone name, is allowing Apple to use the name, according to Bloomberg News. Cisco's Linksys unit has a family of voice over Internet Protocol phone products under the iPhone brand.

• The store is adding Paramount movies to its lineup, bringing its number of available movie titles to 250 from 100.