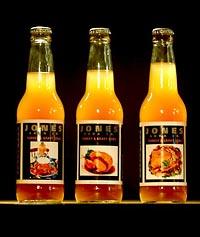 When it comes to remembrances of holiday seasons past, Jones Soda has some doozies.

For employee Aaron Reed, celebrating the fourth year of turkey-and-gravy soda calls to mind that first sample bottle back in 2003. The one with turkey skin used as flavoring.

"In dealing with the flavor specialist, we hadn't specified that it needed to be vegetarian," Reed recalled.

Because he was the newest Jones employee at the time, Reed had to take the first swig, and "it was horrifying."

That describes many subsequent holiday flavors from Jones, which this year released two gift packs that retail for $9.99 to $14.99.

One is a traditional "meal" of turkey and gravy, green pea, sweet potato, dinner roll and — for the finish — antacid.

"It's not something you want to put on ice when you get done mowing your lawn," said Reed, who is Jones' purchasing manager and project coordinator for the holiday pack.

He's also the one guy you can count on to drink an entire bottle of each holiday flavor. "That is my holiday tradition, the day before Thanksgiving," he said. "I have my traditions, you have yours."

Over the years, the team at Jones' headquarters in South Lake Union has sampled dozens of possible holiday flavors.

They've even toyed with switching the main course to honey-baked ham but have refrained. "Dance with the turkey that brung you, that's what we say," Reed explained.

He's not sure how many gift packs the company will sell this year. It began with roughly 1,400 bottles of turkey and gravy in 2003 and ramped up to nearly 200,000 gift packs last year.

One thing that's never changed is Jones' top-secret formula for the turkey-and-gravy flavor.

"Hopefully," Reed said, "future generations will be able to say that the turkey and gravy at Jones is just like mom used to make."