Clive Owen, who plays a disillusioned bureaucrat in "Children of Men," ducks a bomb blast in the thriller, set in a near-future England where terrorism is just another part of daily life. (JAAP BUITENDIJK)
By Mark Rahner
Seattle Times staff reporter

I'm warned that Alfonso Cuarón considers himself a serious director, and not to open up an interview about his outstanding yet ambiguous new "Children of Men" with, "What's it all about, Alfie?"

The film, which opens Monday, is serious as a heart attack — in a firefight, wearing flip-flops and carrying an infant. At least it is for Clive Owen, playing a jaded bureaucrat awakened to action by a seeming miracle in a grim, near-future England, where humans have inexplicably been sterile for 19 years, immigrant "fugees" are arrested and herded into cages, and terrorism is a fixture of daily life.

A close ally of fellow Mexican directors Guillermo del Toro ("Hellboy," "Pan's Labyrinth") and Alejandro González Iñárritu ("Babel"), Cuarón, 45, got an Oscar nod for 2001's "Y tu mamá también." He moved on to "Harry Potter and the Prisoner of Azkaban," the third and, to many, the best of that series. Our serious dialogue at Hotel 1000 — Cuarón's English remains slightly imperfect — loosened up as we went along.

Q: Put "Children of Men" on a double bill with "An Inconvenient Truth," and the suicide rate will spike.

A: Or the other way around. People will trigger their own potential for transformation. That I think is what is needed now.

Q: The loss of individual rights, xenophobia, living with terrorism. It's not really about the future at all, is it?

A: Oh, totally. That's the reason I took it as a metaphor, because then I said, OK, if I take the infertility as a metaphor, then it can be a point of departure to do an exploration of the things that are shaping the first decade of the 21st century, the state of things. And when you do that exploration, you don't go very far away without hitting environment and immigration as two of the many issues that are shaping this decade.

Q: This makes "Soylent Green" look like a Disney film. Did other dystopian movies inspire you?

A: The funny thing is, we were trying to escape from the dystopian movies. And obviously growing up, these movies that you're talking about, those are movies that I watch over and over and I love. The thing is that I didn't want to make a cautionary tale, because I don't believe there's time for caution.

A: Cautionary tales were fantastic in the '70s. The only thing we have time for is transformations, and that's what we were trying to trigger with the film. We tried to do a film that is not a dystopian what-if, but more than watching dystopian films, we watched, for instance, "The Battle of Algiers." It's, "OK, let's approach this like it's a reality." So we have to honor a couple of conventions of the story so it makes sense that it is the future, like deal with the cars a little bit, with the billboards, that they're a little bit more modern than our thing; at the same time keeping the balance so those cars wouldn't alienate your sense from the present. But the rest of the stuff that you see on the screen is nothing but reference of stuff that has been happening on this planet in the last five years or so.

Q: Seeing Clive Owen's performance convinced me he's too good of an actor to be James Bond. Did he discuss that with you?

Q: The urban combat equals anything in "Saving Private Ryan." Did you have a model for that?

A: Unfortunately, yeah. Unfortunately, it's called Iraq. We were trying to reference reality all the time, so most of the stuff you see on the screen is just taking references of stuff that existed.

Q: So you watched a lot of footage?

A: A lot of horrible footage, yeah. But it was timed in the sense of following the principle of "The Battle of Algiers," in which they had to put a disclaimer saying that every single shot here is reproduced, nothing is stock footage. This was the same principle: Let's try to make it feel as if it's stock footage, even if it's sort of in the future.

Q: It didn't seem like an intuitive leap from "Y tu mamá" to Harry Potter to "Children of Men." Some people who saw "Y tu mamá" may have expected to see Ron and Harry kiss.

Q: What ties these works together?

Q: I'd been thinking about a vasectomy, but you've caused me to reconsider that, at least temporarily.

A: Vasectomy! (Laughs.) The other way around! We need to have children, and the hope is with them. They're the hope.

Q: Well, now you're starting to sound like a Whitney Houston song, so it's time for me to leave.

A: (Shrieking now.) Oh, man! Oh my god! Which period of Whitney? 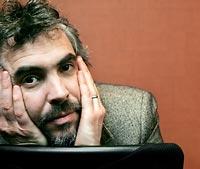 More from the Q&A

Is it true that you didn't read P.D. James' novel?

Well the thing is, when I understood that the premise, the infertility could be used as a metaphor for the fading sense of hope, and then I realized it could be the point of departure to explore the state of things, then pretty much the whole story came into my head. You know, I saw the whole movie. And I was so scared to sidetracking and second guessing myself that I asked Tim Sexton my writing partner, I said, "You know I'm not going to read it, because I want to be clear and this is the movie I want to do. Why don't you read it? And now you know the movie I want to do. Why don't you then bring into the table the element that you think I'd want to be relevant to tell the story that I'm telling?" And that's what we did. So we rescue elements from the book that would be relevant to the story I wanted to tell.

First of all I'm so grateful, because even if we didn't follow the storyline of the book, she triggered the creative process. Then she saw the movie and she was very generous about it. She made a statement and she said that she understood that the film drifted apart from the book, that they were two different things but that she was proud to be associated with the movie.

"Children of Men" is about global infertility when the planet's really suffering from overpopulation.

I never cared about infertility from a literal standpoint. For me it's a metaphor for the fading sense of hope and the lack of human historical perspective. Meaning that humanity's living a culture of hedonism in which everything is instant gratification. Even our economy is about instant gratification, it's economic growth without any concern about the consequences. In other words there's a complete disregard for the next generation.

You leave some major questions unanswered — such as what caused the infertility — which some viewers might consider bold and others frustrating.

I agree. But the thing is that you cannot please everybody. There's a kind of cinema I detest, which is a cinema that is about exposition and explanations. Cinema has become now a medium — well a lot of mainstream, and even indie sometimes — it's become now what I call a medium for lazy readers. It's illustrated stories. You can close your eyes and you can follow the movie. What's the point of seeing the movie? Cinema is a hostage of narrative. And I'm very good at narrative as a hostage of cinema.

You know what it is? It's so brilliant because we are so damn honest one with each other, particularly creatively. Because I know that whatever Guillermo or Alejandro tells me comes from a standpoint of purity, and some point of love and caring. And that doesn't mean that sometimes I get pissed off at them, and Alejandro tells me something he don't like about my script and sometimes I get a little upset and I hang up the phone and I say "This guy doesn't get it," it's reactionary. And then the next morning I wake up saying, "Oh, I get what he was telling me," and I have to call him back and say "OK, keep on telling me."

Your close friends will be that honest with you and not be sycophants.

No, that is the thing, and it's so difficult in this thing in which you have people that either worship you or they want to keep a nice relationship, and they think that keeping the nice relationship is trying to be too polite with you. It's so great to have these two animals. They can be animals, I tell you. And you know what, the truth of the matter is that rarely I get pissed off. You just listen because I know I can trust them.

So if I told you that you were full of (expletive), that would be a great bonding experience for us?

(Laughing.) It would be fantastic! No, man, it's not about trashing one another, it's about where it comes from. And that's what makes our relationship so easy. It's been a really interesting lately between the three of us. It's been going on for a while, but this year, the last couple of years in which these movies came together at the same time, it's been so good, I have to say I feel protected.