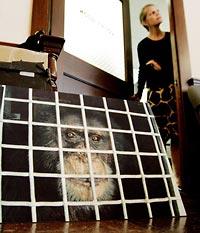 SAN ANTONIO — The private animal sanctuary nestled in the picturesque hills above San Antonio was supposed to be a place of comfort and refuge for hundreds of chimpanzees, monkeys and other animals that had outlived their usefulness as research subjects, movie props or pets.

And for most of the past 28 years, Primarily Primates enjoyed an esteemed national reputation in the animal-welfare community, attracting donations and support from zoos, universities and Hollywood celebrities.

But somewhere along the line, according to the Texas attorney general, things began to go terribly wrong behind the chain-link fence that separated the animal refuge from the public. Charitable funds were misdirected, the attorney general alleged, used to buy groceries, liquor and even a house for one of the staff members. The sanctuary's founder, Wallace Swett, allegedly began "hoarding" hundreds more animals than the facility could hold.

By the time Travis County Probate Judge Guy Herman ordered a temporary receiver to take over the charity in October, finding that the sanctuary's managers were continuing to "neglect and mistreat" the animals in their care, many of the 75 chimpanzees were sealed inside filthy cages behind metal doors that had rusted shut.

The heating system to protect the animals from freezing nighttime temperatures was broken, animal feces and rotting food overflowed shallow trenches crisscrossing the grounds, and cockroaches carpeted the floors and walls of some of the animals' sleeping houses, while rats had colonized others.

Lee Theisen-Watt, the Dallas wildlife rehabilitator appointed by the court to try to improve conditions at the sanctuary, shook with anger as she led a reporter on a tour of the facilities last week.

"I cannot excuse anyone for the suffering these animals have endured and are continuing to endure because there are things we can't fix immediately," Theisen-Watt said. "After seeing what I've seen and how long and how deep and how bad it is, I don't care what the intention was, it resulted in the most atrocious conditions and care and lives for these animals."

Yet what seemed to the state of Texas like an open-and-shut case of animal abuse is roiling the animal-rights movement, with two major groups facing off in a bitter struggle over the future of the sanctuary — and what constitutes cruelty to animals.

On one side is People for the Ethical Treatment of Animals (PETA), a Virginia-based activist group, which began investigating conditions at Primarily Primates last year after receiving tips from concerned former employees of the refuge. PETA eventually passed its findings to Texas Attorney General Greg Abbott, whose office quickly sought and received the emergency court injunction to hand control of the facility to a receiver.

"Bringing law enforcement down on the head of a sanctuary is not my idea of a case I long to take on," said Mary Beth Sweetland, PETA's senior vice president. "It's just galling that we have to spend our time working on something that should never have happened. But it did happen. And when we took a look at the extent of the suffering, it was impossible to turn away."

On the other side is Friends of Animals, another well-known animal-rights group. It is based in Connecticut and rushed to the defense of the former managers of Primarily Primates and is footing their legal bills as they battle in court to regain control of the sanctuary.

Friends of Animals President Priscilla Feral insisted the allegations of animal cruelty are part of a PETA plot to take over the sanctuary, euthanize all the animals and sell the facility's valuable land. What's more, Feral said the animals at Primarily Primates received excellent care.

"I'm not freaked out by mice," Feral said when asked about photographs showing massive vermin infestations at the sanctuary. "If you have lots of food, certainly rodents are attracted. And the roaches; it's not odd that they are there. They are part of nature."

PETA dismisses Feral's allegations about its motives as absurd, and in fact, the group has no control over what happens to the sanctuary now that it is under a court's jurisdiction.

But the squabbling distresses other animal-welfare groups, which view it as an inevitable result of the fact there are few state or federal laws governing conditions at private animal sanctuaries.

"Without any kind of objective standards or arbiter in the way of a regulatory body, everyone comes away with their own approach and sides are often taken," said Richard Farinato, a sanctuary expert at the Humane Society of the United States who toured Primarily Primates last week.

"A place like Primarily Primates subscribed to no set of standards other than its own because legally they are not bound to, and this is what happens. The place is in deplorable shape."

Swett, the sanctuary's founder, declined repeated requests to be interviewed. Tello denied every allegation lodged by the attorney general.

"What they're trying to make you believe is that we didn't care, and that is absolutely false," he said. "We always made sure these animals had climbing structures and shelters and heat and companions."