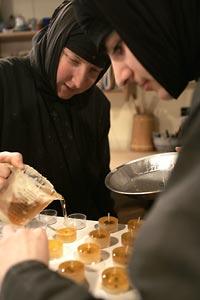 On a chilly December afternoon, a vat of molten beeswax heated inside a water-jacketed tank, smelling slightly of honey, while candles stood on trays ready to be packed in boxes.

In the next room, there was a stock of work from more than 60 vendors: candles, raw and creamed honey, holiday plates, lanterns, Christmas ornaments, Egyptian alabaster jars, carved wooden toys from Russia and tapes and CDs of carols.

Orthodox Christian nuns from The Convent of the Meeting of the Lord make a living here at Quiet Light Candles near Stanwood.

Sent out from their mother house, the Holy Nativity Convent in Brookline, Mass., they've brought clean-burning light — and pilgrims — for nearly five years now to rural Stanwood. Dressed in black habits, they live a contemplative, semi-cloistered life. No newspapers, no radio, no television, no distractions — on purpose.

Orthodox Christian belief is based on the Gospels and the Bible's Acts of the Apostles and epistles of Saint Paul. The convent was an offshoot of the original all-male Holy Transfiguration Monastery in Massachusetts.

But don't think for a moment that Mother Thecla, Mother Evdokia or Mother Mary are recluses. They are deeply connected to their community.

Their foray into commerce came in a roundabout way, when a lavender farm asked if they would want to manufacture lavender-scented paraffin candles.

It almost killed them — breathing toxins from the paraffin, a petroleum product, combined with the anesthetizing agents in the lavender was like breathing diesel exhaust, one doctor told them.

They quickly halted production — but they had all that equipment.

They turned to bees.

"We only make beeswax candles," said Mother Evdokia, "and the reason being is that beeswax is a natural product. And it's made by the bees, and 60 pounds of honey are produced for one pound of beeswax. It's just the 'jar' in which the bees stored the honey. In olden times, it was reserved for royalty, and you could pay your church dues in beeswax."

The Brookline convent had made hand-dipped tapered candles for many years, in addition to vestments and other items. But the nuns had been told there were no wicks manufactured to accommodate beeswax tea lights and votives.

"We went through six months of wick experiments to find the right wick to burn just the right way," said Mother Thecla.

Using pure cotton wicks and doing everything by hand, they produced a form of votive candle that would burn for up to 18 hours. The wax is poured into a votive cup, and the wicks have to be stood up and centered in the hot wax before it firms up.

"The neat thing about beeswax, which we didn't know before we actually started all this, is that beeswax produces negative ions when it burns, which cleans the air," said Mother Evdokia.

They converted an old dog run that had a lean-to into a production shop, then started going to gift shows, local lapidaries and artisans for other products.

The mission was to be self-sustaining, part of the Orthodox tradition of labor and prayer. "All of our communities have that," said Mother Thecla. "So we try to do handicrafts, because our main goal is to try and stay centered on prayer all day. We tried to pick a handicraft that's conducive to that and is also quiet."

"Yes, it just evolved," said Mother Thecla. "We prayed about that for a long time."

During the years since moving from Brookline's Holy Nativity Convent, the nuns have been putting out small signs off Interstate 5's exit 215, leading people to their shop on selected days.

Quiet Light Candles is usually open from 10 a.m. to 2 p.m. every Saturday, and this Saturday is the final day of their Christmas Festival. The signs are themselves a little pilgrimage, and more than one person has stopped out of curiosity and renewed his or her faith here.

"It's a very special thing when a person dedicates their whole life to God," said Mother Thecla. "This is a lifetime vow. We believe that it's a consecration, and that consecration is actually a blessing for everyone — for the person, for the community, for their family, for everyone. Mankind is one, right? So if a part of mankind consecrates themselves, that's a blessing."

While the transfer from East to West Coast was a big change, "I loved it right away," said Mother Mary. "The scenery, the trees, art, a nice quiet place, the woods here. The mountains and trees were so different, and all the people around here dare to speak of God."

There are three permanent members of the convent, with one rotating member from Brookline. People express surprise that there's a convent in Stanwood. "They go, 'How'd they pick Stanwood?' " said Mother Thecla, adding, "The house was chosen by committee at St. Nectarios Church, and it was passed through their authorities."

Balancing worship and household duties with candle manufacturing and shipping is given a helping hand by friends and neighbors.

"Picture that we could be using 20 people and we're four, with two volunteers," said Mother Thecla. "So it's like, whatever's the most immediate problem is where you send them."

To call the candle factory a hive of activity is not only a pun, it's apt. "Actually, in some of the literature of the church, they do compare a convent with a beehive," said Mother Thecla. "The whole idea of order and activity, and they create something sweet."

What, when: The Sisters of The Convent of the Meeting of the Lord hosts an annual festival, with refreshments and handicrafts, from 9 a.m. to 4 p.m. Saturday.