Nearly one-quarter of America's 9,962 nuclear weapons are now assigned to the Bangor submarine base on Hood Canal, 20 air miles northwest of downtown Seattle.

This makes Bangor the largest nuclear weapons storehouse in the United States, and possibly the world.

The share of the nation's nuclear armaments at Bangor is higher than it has ever been for two reasons:

• The warheads assigned to the ballistic missile submarines stationed at Bangor and at Kings Bay, Ga., now constitute more than half of the U.S. strategic weapons force.

• Other storage sites have been closed or consolidated as the country has cut the size of its arsenal from a Cold War peak of some 24,000 weapons.

The status and disposition of the nation's nuclear arsenal is detailed in the current issue of the Bulletin of the Atomic Scientists. Bulletin authors Robert S. Norris and Hans M. Kristensen say the U.S. arsenal is now the smallest it has been since 1958. U.S. nuclear arms are maintained at 18 facilities in 12 states and six foreign countries, according to the report.

The Bulletin was founded in 1945 by scientists who participated in the Manhattan Project to develop the atomic bomb and is considered an authoritative source of nuclear weapons information for the United States and other countries.

Pinpointing the whereabouts of all U.S. nuclear weapons, and especially the numbers stored at specific locations, is fraught with many uncertainties due to the highly classified nature of nuclear weapons information. Declassified documents, leaks, official statements, news reports, and conversations with current and former officials provide many clues, as do high-resolution satellite images of many of these facilities. Such images are available to anyone with a computer and internet access, thanks to Google Earth and commercial satellite imaging companies such as DigitalGlobe. This development introduces important new tools for research and advances citizen verification. The statistics contained in this article represent our best estimates, based on many years of closely following nuclear issues.

Thus, the estimate of what is stored at Bangor can't be verified but probably is quite close.

Unsurprisingly, the 2,364 weapons reportedly assigned to Bangor are warheads for the Trident and cruise missiles carried by the submarines based there:

• 1,100 W76 warheadsfor Trident II D5 missiles. The W76, the mainstay of the U.S. nuclear arsenal, has a yield, or explosive force, of about 100 kilotons. That's more than six times the power of the atomic bomb dropped on Hiroshima at the end of World War II. Each of the nuclear-powered ballistic-missile submarines at Bangor can carry up to 24 Trident II missiles. Those missiles in turn can be armed with up to eight W76 warheads apiece, or as many as 192 warheads per sub.

• 850 W76 warheads for Trident I C4 missiles. These warheads are inactive, as Bangor's subs have been upgraded to carry Trident II D5 missiles

• 264 W88 warheads for Trident II D5 missiles. The W88 has a yield of about 475 kilotons and is considered the most sophisticated thermonuclear weapon in the U.S. stockpile. Each of the 24 missiles on an Ohio-class nuclear submarine can carry eight W88 warheads.

• 150 W80-0 warheads for sea-launched cruise missiles (four Trident subs have been converted to carry cruise missiles rather than ballistic missiles and two of those subs are stationed at Bangor).

The mix of warheads carried by each of the Bangor submarines is classified and most likely varies depending on its patrol mission and international circumstances. About half of Bangor's active weapons are at sea at any given time, the Bulletin estimates.

At Bangor, weapons not deployed aboard subs are stored in bunkers that are visible in commercial satellite photos readily available on the Web. The Federation of American Scientists blog Strategic Security has an interactive map and satellite images of the country's various weapons sites. The map requires Google Earth software, which is available free from Google.

No nuclear weapons have been used since August 1945, when the U.S. bombed Hiroshima and Nagasaki to end World War II, though there have been a number of close calls since. There also have been scores of military accidents or incidents involving nuclear weapons over the last 60 years, including four at Bangor, the last of which occurred in late 2003. In the Bangor incident, a Trident missile was damaged, but none of its warheads were and no radiation was released.

Commonly, not much information is released about these accidents, and their relative seriousness is often difficult to gauge. There is no evidence that an unintended nuclear explosion has ever occurred, though radiation has been released numerous times as a result of aircraft crashes or fires.

The Center for Defense Information notes in this lengthy appraisal that the Navy reported 563 "nuclear weapons incidents" between 1965 and 1983, though fewer than half of those seem to have been actual accidents involving weapons.

One Navy accident of regional note occurred Sept. 25, 1959, when a P-5M antisubmarine aircraft crashed into Puget Sound near Whidbey Island. The nuclear depth charge it carried was never recovered.

Nuclear weapons in storage most likely pose little danger. However, they no doubt would be high on the target list of any nuclear-armed adversary.

A new government report concludes that deterioration of nuclear weapons — long a concern because of potential effects on their reliability — may be much less significant than previously believed. Thus, it's likely we'll be living with a lot of them nearby for a long time to come. 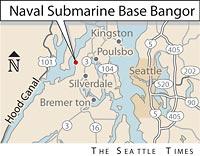 This is the view aft from the bridge of the USS Ohio as the 560-foot submarine cruises off Sequim. (STEVE RINGMAN / THE SEATTLE TIMES)

Crew members of the USS Pensylvania look for family and friends ashore as the submarine docks at the Bangor base. (JOHN WOODMANSEE, 2002)

Youngsters from area schools play at Deterrent Park at Bangor where the centerpiece is the "sail," or conning tower, of the decommissioned ballistic missle submarine Woodrow Wilson. "Crossing America: Dispatches from a new nation" Alex Tizon and Alan Berner September 11, 2001 9/11 Sept. 11 (ALAN BERNER / THE SEATTLE TIMES, 2001)

A crewman on the USS Michigan stands guard on the deck of the submarine as it is prepared for its next patrol. (ALAN BERNER / THE SEATTLE TIMES, 2001)