A grass-roots protest fizzled yesterday after the controversial pastor of an evangelical megachurch in Seattle apologized for what critics say were demeaning comments about women.

After being confronted by other local religious leaders, Pastor Mark Driscoll of Mars Hill Church said he was sorry.

"We believe we have a meaningful and sincere apology for the inflammatory remarks he's made," said Paul Chapman, a member of People Against Fundamentalism, whose half-dozen core members are Christians. "He's pledged to change his language and tone without giving up on his theological convictions, which is fine."

Chapman said protest organizers also achieved a second goal: The Seattle Times discontinued Driscoll as a religion columnist, although the newspaper said the decision had nothing to do with the protest.

The recent furor — whipped up with a heated online debate — was sparked by Driscoll's remarks after national evangelical leader Ted Haggard admitted he had bought drugs from a male prostitute.

"It is not uncommon to meet pastors' wives who really let themselves go," Driscoll wrote on a personal blog. "A wife who lets herself go and is not sexually available to her husband ... is not responsible for her husband's sin, but she may not be helping him either."

On another blog, Driscoll speculated on the recent election of a woman as bishop of the Episcopal Church: "If Christian males do not man up soon, the Episcopalians may vote a fluffy baby bunny rabbit as their next bishop to lead God's men."

Driscoll was derided nationally for his blog remarks after the Haggard affair.

On the other hand, Haggard's niece Carolyn Haggard, who's responsible for media relations at New Life Church in Colorado Springs, says she contacted him to "lend him my support and offer some encouragement."

Driscoll is a nationally prominent pastor, author and speaker. Christianity Today International named him as one of the most important "Next Generation of Influential Preachers."

Local critics who took issue with the language Driscoll has used regarding women include the ecumenical campus minister at the University of Washington, the executive director of the Church Council of Greater Seattle, and theology professors at Seattle Pacific University.

Afterward, Driscoll posted the "apology" on his blog. He said he was "sad and sorry" to hear that things he has said have made some people feel "personally attacked."

He said he learned from the meeting that as his prominence has grown, so has his responsibility to speak in a way "that invites other people to experience charity from me, which means inflammatory language and such need to be scaled back."

Driscoll said Sunday he won't apologize for what he believes. "But, if the way it was said was not as good as it could've been, then I want to do a better job in speaking what I believe in a way that's more gracious," he said.

He said he believes "that there are distinctions between men and women, but not inequalities."

Mars Hill, founded by Driscoll in 1996, says it has up to 5,000 weekly worshipers at campuses in Ballard, Shoreline and West Seattle.

Meanwhile, The Seattle Times told readers Saturday that Driscoll would no longer be one of its religion columnists and thanked him for his service.

"The decision to discontinue Pastor Driscoll's participation was part of a review that was under way before we knew of any protest against him," said a statement from Executive Editor David Boardman.

The newspaper said it is seeking a new columnist to represent an evangelical Christian viewpoint.

Driscoll said he was given no reason for being discontinued but knew the column would be temporary.

"I was treated very well," he said. "It was a great honor and I'm very thankful for the opportunity."

Though the protest was called off, it didn't quite die. About 25 would-be demonstrators showed up Sunday across the street from Mars Hill's Ballard campus. Some called the apology an attempt at damage control.

"I don't know that it was adequate. It's easy enough to apologize," said Matt Lechner, a librarian from Seattle. "It's a PR move that was probably smart."

"The language he uses in church regarding women has always been extremely respectful," said Sean Kincaid, a Seattle anesthesiologist who has attended Mars Hill for about six years.

Protest organizers paraded a sign thanking Driscoll for his apology. They said they plan to use the apology to draw national attention to his views. But they aren't going to monitor everything he says.

"By no means do I plan to do a Driscoll watch," Chapman said. 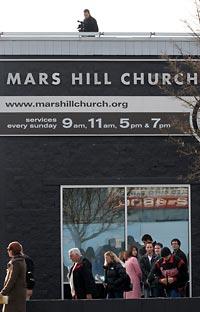 As churchgoers leave a service at Mars Hill Church on Sunday, a man videotapes would-be demonstrators who had gathered across the street. (TOM REESE / THE SEATTLE TIMES)