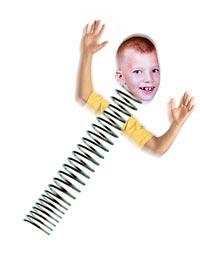 By Melinda Tsuchiya
Special to The Seattle Times

Jeremy Guddal walked at 9 months, stopped naps at 1 year and only slept six to eight hours a night. As a toddler, he jumped instead of walked, swung on doors and often got up to play in the middle of the night — bowling with eggs in the living room or painting his bedroom with diaper cream.

Tobey Gloss thought this was normal; Jeremy was her first child. It was the delayed speech that got her attention. At 3 years 7 months, Jeremy's speech was typical of an 18-month-old. The Lake Stevens boy was diagnosed with attention-deficit hyperactivity disorder (ADHD); he couldn't focus to learn.

Parents of such children often find relief in a diagnosis of ADHD or attention-deficit disorder (ADD). Finally there's something to explain such behavior. But the diagnosis is just as likely to unleash a flood of advice and warnings: Try this, don't do that, read this, go here, go there.

Deciding what to do next can be a terrific struggle. Most families wind up using medication, but there are those who are sure it's a mistake. Crusaders on both sides regard the decision as more of an ethical one than a medical one.

Dr. Russell Barkley, a widely recognized authority in childhood ADHD, urges parents to question everything they read and hear about the disorder, even his own books. The bottom line: It's up to parents to do their homework before they embark on a treatment plan.

An ADHD diagnosis, when José was 10, seemed "really flakey" to his mom, Rosie, who asked that her and her son's real names not be used.

"How can you just ask a few questions and come up with a diagnosis?" she asks.

When doctors suspect ADHD, they usually pose a series of questions to parents, teachers or others who know the child well. They compare the answers with specific diagnostic criteria.

The lack of a physical test concerns some people. How can there be a diagnosis with no physical evidence? Is the disorder even real?

Dr. Ted Mandelkorn, an ADHD specialist on Mercer Island who tracks scientific studies on the disorder and often addresses local support groups, says, "We are now getting the facts about ADHD, and it is not turning out to be laziness, bad mothering or diet, all of which had been conjectured. The evidence now points to genetically transmitted differences in the neurochemistry coupled with environmental stresses."

Mandelkorn fears for kids who aren't diagnosed early. For too many, he says, the disorder is recognized only after "their lives are shattered from auto accidents, school or work failure, dissolved marriages or jail."

"The stimulant medications are one of the most studied treatments in the history of medicine," Mandelkorn says "with no evidence to date of long-term concerning side effects."

The medications don't seem to be addictive in either form. Patients who skip or stop their meds may experience some withdrawal, and certainly a worsening of ADHD symptoms, but the drugs are not addictive in the sense that users come to crave them.

Although some children do experience medication side effects — irritability, anxiety or anger, for example — they are often fine when changed to different drug, Mandelkorn says.

Another, common side effect of ADHD medications is appetite suppression, which can impact height and weight.

To compensate, some parents give kids a "drug holiday" over school breaks and see growth spurts during such times.

Other parents, and some doctors, believe it is better not to interrupt medication since important learning occurs every day. Mandelkorn believes most patients need medication day and evening, seven days a week. He recommends protein at lunch and eating later in the evening to maintain weight if necessary. He does not advocate drug holidays.

From school to meds

Gloss, a nurse, had "done a lot of doctors" before Jeremy was diagnosed. This would not surprise ADHD specialists, who say over 90 percent of their colleagues have no training in ADHD.

After her son's diagnosis, Gloss didn't want to put Jeremy on medication. On the pediatrician's advice, Jeremy began attending a special-education preschool and going for occupational and speech therapy. Gloss and her husband began parent counseling.

A year later, "there was no decrease in behaviors, no improvement," says Gloss. Jeremy was still jumpy, unable to follow instructions and barely talking.

The pediatrician proposed a one-child study of available medications. Jeremy took a different one each week for a month, and his parents, teachers and therapists tracked the effects on a scorecard. Only the doctor and pharmacist knew what Jeremy was taking.

The unanimous outcome: The higher dose of Ritalin (methylphenidate) improved Jeremy's behavior and helped him focus to learn.

That was 11 years ago. Today, Jeremy takes Concerta, an extended-release form of methylphenidate, as well as Celexa for an anxiety disorder.

This "multimodal treatment" — the combination of medication, behavior management, school supports and parent education — is the "gold standard" of ADHD treatment in children recommended by the National Institute of Mental Health in December 1999.

Jeremy's last round of testing in June resulted in a diagnosis of pervasive development disorder not otherwise specified (PDDNOS), a form of autism. Studies show that 70 percent of people with ADHD have one or more co-occurring conditions; 30 percent have learning disabilities.

Jeremy's ADHD is managed with medication but other conditions hold him back in school. Gloss encourages other parents to test alternative or complementary treatments: "Don't jump into medicating if you don't want to," she says.

Even when families opt for medication, it doesn't always work. Ten to 20 percent of ADHD kids either don't respond to medication or experience adverse side effects.

Rosie never considered medication for José, because it doesn't cure the disorder.

José first went for counseling — "totally useless," says Rosie, "because the counselor focused on finding the answers in his behavior when the problem was in his brain."

Eventually, Rosie learned about HANDLE therapy from other parents.

José had a consultation to determine his weak areas and then began a personalized treatment program — 20 minutes of home exercises each day.

Two months into the six-month program, he was showing progress, Rosie reports. By the end, "he was like a different person — more energetic and happy, much more cooperative at school and in control of his emotions."

According to its Web site, "the HANDLE approach treats APD at the root of the problem, yielding permanent changes in the nervous system, rather than just masking the symptoms."

All over the map

For every 100 children with ADHD, there are likely 100 different courses of treatment.

Both medical and non-medical practitioners recognize the importance of a holistic approach to ADHD, including the right education environment, healthy diet and individualized treatment.

No matter what approach parents take, there are people and organizations to help. Ask the school nurse or counselor for referral. Attend a local support-group meeting. Read books and do research online, making every effort to weed out the sales pitches and religious doctrine.

"Be open-minded," Rosie advises. "Find out about alternative treatment before committing to traditional medicine." Most important, Gloss says, "Listen to your gut. Parents know if a diagnosis or treatment is right for their child."

Melinda Tsuchiya is a freelance writer and the mother of a son who has ADD. Her e-mail is: melinda.tsuchiya@usa.net.

Alternative and complementary treatments for ADHD range from the common-sense and low-cost to the potentially dangerous and high-cost with ineffective and difficult treatments in between. Here are some guidelines for parents:

Consider the cost, risks and time commitment involved. If a treatment is cheap, safe and convenient, it doesn't require as much evidence.

Do research online and by asking the health provider questions such as:

• Have clinical trials or studies about this treatment been conducted and published in peer-reviewed journals?

• Does this child fit the description of those who responded to the treatment?

• Does the National Center for Complementary and Alternative Medicine (NCCAM) at the National Institutes of Health have information about the treatment?

• Is the treatment reimbursed by health insurance?

After starting the treatment, record the results using a rating scale based on the ADHD symptoms you hope to improve. Involve teachers and others active in the child's life.

Be suspicious of treatments that claim to help everyone, have not been scientifically studied, don't list contents, don't provide information about side effects or are promoted only through infomericals, self-promoting books or by mail order.

Information on the Web