Images by local animator and animation teacher Tony White range beyond conventional cartoons. White will show an archive of his many years of award-winning work. (COURTESY OF TONY WHITE)
By Diane Wright
Times Snohomish County Bureau

What did Walt Disney and Salvador Dali have in common?

Audiences had to wait nearly 60 years to see.

"Destino" is the animated collaboration between the cartoonist and the surrealist, a six-minute film that screens at 7 p.m. Saturday as part of the 2D or Not 2D Animated Film Festival at the Everett Theatre. It's part of a weekend of talks and screenings of new and classic animated films Friday through Sunday.

Roy E. Disney, Walt's nephew and a former Disney executive, will present a talk and retrospective of Disney short films that spans the 80-year journey through Disney animation.

It starts with Oswald the Rabbit, a precursor to Mickey Mouse, and works forward to two Academy Award-nominated short films, each about six minutes long. "Destino," the collaborative film by Walt Disney and Salvador Dali, was begun in 1946 but not completed until 2003 by the Disney studios. "Lorenzo" was conceived by Disney legend Joe Grant, whose work included the classics "Fantasia" and "Dumbo."

"He had this crazy idea of a cat that loses control of his tail, and the tail does the tango," Roy E. Disney said by phone from Los Angeles.

Nancy Beiman, former Disney animator and storyboard expert, will show works and do a PowerPoint presentation from her new book, "Prepare to Board."

Tony White, one of the festival's producers, will show an archive of his 30 years of award-winning work as well as his latest film, a 10-minute history of animation called "Endangered Species."

There also will be screenings and awards for new animated films, a showing of the British animated feature "Animal Farm," and presentation of the new Roy E. Disney Award for outstanding contribution to the traditional animated art form.

"The joy of moving things — animation — how to make figures walk and move, is magic," White said.

White, an Everett resident, has had a respected career in animation, including animating Hokusai's wave image, and ancient builders in "Cathedral." He also worked on animation and titles for "The Pink Panther Strikes Again."

White taught animation at Henry Cogswell College for five years and now is on the faculty at the DigiPen Institute of Technology in Redmond.

He'd like to see art brought back into animation.

"For so long, it's been synonymous with cartoons," he said.

"It's time to bring the artist back into the [animation] art movement."

At the festival, White also will show a film in progress called "Fire Gods," on the history of glass and glassmaking, being produced for the Museum of Glass in Tacoma. Dale Chihuly has recorded some dialog for the piece, which will tell the story of glassblowing through the ages and use largely student-created animation in different art forms, among them Egyptian mosaics, Roman tiles and Medieval engravings.

"What Tony's doing is important," said Roy E. Disney, who wrote the preface to White's book on animation and also was a catalyst for Eisner's departure from the company. "I think it's important because I don't think two-dimensional animation ever died. It was threatened a bit by Mr. Eisner, who declared it dead a few years ago, to my dismay. It was bad for artists, and there are films out there, again done in 2D, that disprove the point. To the extent I can reverse that historic trend, I will."

In a sense, Disney added, "It's 'Snow White and the Seven Dwarves' versus 'Toy Story,' two entirely different ways to produce animated figures on the screen, but both with the same motive: to tell a great story."

"He was just Uncle Walt to me as a kid, my dad's little brother, a neat guy and a good storyteller," said Disney. "Later on, I ended up working for him. He wasn't playing favorites or being extra hard, but he was a tough guy to work for. He had very high standards."

Now director emeritus with the Walt Disney Co., Roy E. Disney was chairman of Disney's animation department from 1984 to 2003 and wrote, produced and directed many projects.

The 75-year-old, L.A.-based executive is, like his uncle, a philanthropist whose projects include the California Institute of the Arts, where he is a trustee. He has received honorary doctor of fine arts degrees, and humanitarian and environmental awards.

He's also working on a film based on his other great love: sailing. He has set many records in competitive sailing and is about to film a story about the youngest crew ever to compete in a trans-Pacific race from Los Angeles to Honolulu. The average age of the crewmembers will be 21, and they'll train in Hawaii for four months starting in January.

"We're going to document that on film and document the race itself," said Disney. "It's a story about how a team forms and what it takes to be a team."

The genius of Walt Disney, says his nephew, was that "he understood his tastes were accessible to a lot of people. It was an underlying faith in your own judgment. We made these movies for ourselves, for the child in each of us. There was an escapism about it that was very clear." 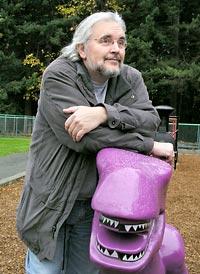 Tony White will be among experts featured at the 2D or Not 2D Animation Festival beginning Friday. (COURTESY OF TONY WHITE)

2D or Not 2D Animation Festival

What when: Roy E. Disney, Tom Wilson, Tony White and other animation experts and artists will give talks and screen animated masterworks at the three-day festival Friday through Sunday.

Tickets: Tickets start at $5 for specific events, including a "see and make" animation session for children, and go up to $70 for a full weekend package, which includes reserved seating and a reception with the presenters.

Information: For tickets, schedules and information, call the theater box office at 425-258-6766 or go to www.2dornot2d.org.