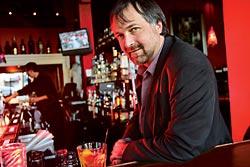 A minister's son, Robert Hess didn't grow up around alcohol. But the cocktail-scholar-in-waiting was fascinated at an early age by bartenders in movies and their sea of bottles.

Now Hess, 47 and a technology evangelist for Microsoft, is a cocktail expert, a co-founder of the Museum of the American Cocktail in Las Vegas and the mind behind www.drinkboy.com. Bartenders in London, Paris, New York and South Africa know him. Seattle bars serve his concoctions. When he heads to a new bar — four kinds of bitters in hand, including a home-brewed version — he engages unsuspecting bartenders in a three-prong test of their cocktail knowledge. Good luck passing.

"To understand a perfect martini, you have to understand the perfect cocktail. A cocktail is cuisine in a glass. Today's cocktail aficionados will say a cocktail should be a mix of ingredients with a delicate balance that creates a flavor unto itself, just like a French sauce.

In my mind, a perfect martini is gin, vermouth and orange bitters, (with gin and vermouth) in a 1:1 ratio or 3:1 ratio. You need enough vermouth so you don't know where vermouth stops and the gin starts.

People often say they hate gin, but that's because they've never had a good gin cocktail.

We understand the craftsmanship. We have beer, we have wine, we have coffee. We have an appreciation for liquid cuisine. Cocktails are the next step in that direction.

I'm trying to find bartenders with that spark, that culinary artistry and attention to detail a chef does.

There's something better out there than a Midori Sour.

It's kind of my geeky side. I want to participate and really understand it.

It saddens me when people want a drink that gets them drunk and doesn't taste like alcohol.

If you go into a wine bar, you're not going to get drunk. You're going to enjoy cuisine in a glass. The same should be true of cocktails.

I never have the same drink twice in a row.

Humans are always trying to better themselves. The time has come. Let's now take and elevate cocktails."

1. Add simple syrup and bitters to an old-fashioned glass. Fill the glass half full of ice, then stir.

2. Top with fresh ice, squeeze the orange-peel oils into the glass, add the peel, then the whiskey. Stir. Garnish with the cherry. Serve with a swizzle stick and straws.