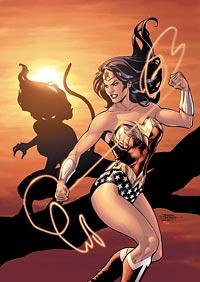 For a generation of women, Wonder Woman was one of pop culture's first feminist icons. (D.C. COMICS)
By Kurt Anthony Krug
Special to The Seattle Times

Usually, when asked about Wonder Woman, the image of her — particularly actress Lynda Carter in the character's eponymous 1970s TV series, deflecting bullets with her bracelets — comes to mind.

Yet there's more to the DC Comics character, who turns 65 this year. For a generation of women, Wonder Woman was one of pop culture's first feminist icons.

"She taught me to believe in myself, always be kind to others, and to take the honest path," said Jennifer K. Stuller, a Seattle-based writer specializing in gender in pop culture.

"Wonder Woman is Diana, an Amazon princess and champion of her people, who, imbued with the power of the Olympian gods themselves, forsook her immortality and her ancient home to teach human beings the values of love, equality and peaceful coexistence," said Phil Jimenez, who wrote and drew "Wonder Woman" in 2000-03. "[She] is the living personification all human beings have to achieve their highest state of being."

Wonder Woman is enjoying a modest rebirth. Her series, written by TV writer Allan Heinberg ("The O.C.") and artist Terry Dodson, was one of several DC comics relaunched this summer. And "Buffy the Vampire Slayer" creator Joss Whedon is working on a Wonder Woman screenplay. Buffy is another popular feminist icon. Stuller's undergraduate thesis at the University of Washington focused on the female hero's role in modern mythology, comparing Wonder Woman to Buffy. She stated Wonder Woman is Buffy's ancestor in many respects.

"She's the archetype. ... Modern incarnations are in part modeled on previous ones," said Stuller. "Both heroines believe that anyone can change and grow into a better person. In Wonder Woman this is seen as reformation, and on 'Buffy' it is seen as redemption."

To her boyfriend's rescue

Peter Coogan, author of "Superhero: The Secret Origin of a Genre" and a professor at Fontbonne University in Missouri, added, "[Wonder Woman] stands as the pre-eminent superheroine, just as Superman does for the super-powered hero and Batman for the nonpowered hero. Without her, the genre might have followed the pulp hero and the Western as a wholly male domain."

Coogan explained that while superheroes vastly outnumber superheroines, in earlier genres — such as the Western — the heroine is essentially nonexistent.

"Wonder Woman offered a paradigm for female heroes that has more recently been used by the producers of 'Buffy,' 'Xena' and 'Dark Angel' to open heroic fantasy to a broader presentation of women and of heroism," he said. "Without Wonder Woman, these more straight-forwardly feminist role models might not exist."

Wonder Woman was created in 1941 by William Moulton Marston, a Harvard-trained psychologist who invented the polygraph and championed many feminist causes in his day. Marston saw the potential of the then-new comics medium and wanted to conceive a female hero to stand alongside Superman. He believed women are superior to men and men should concede to women, leading to an ideal state of loving submission.

"Not even girls want to be girls so long as our feminine archetype lacks force, strength, and power," Marston stated in a 1944 article in The American Scholar. "The obvious remedy is to create a feminine character with all the strength of Superman plus all the allure of a good and beautiful woman."

"I think [he] did this on purpose, partly to have a male who gets rescued by a female — a radical idea at the time — and partly to mirror Superman," explained Piziks. "If Superman rescues his girlfriend [Lois Lane], Wonder Woman should certainly rescue her boyfriend."

After Marston died in 1947, Wonder Woman became less of a feminist. In 1954, psychiatrist Fredric Wertham wrote his controversial book, "Seduction of the Innocent," stating that comics corrupted children. This led to a congressional hearing and the self-censoring Comics Code Authority. Due to this, Wonder Woman was no longer a feminist.

In the late 1960s, Wonder Woman lost her superpowers and became a secret agent à la Emma Peel of "The Avengers." Many felt the series lost its way.

But Wonder Woman returned to her superhero roots in 1973 thanks to Gloria Steinem, who put the character on the cover of Ms. Magazine's first issue. Steinem was offended to see Wonder Woman powerless.

"She promotes the feminist values of love, compassion, truth, acceptance, redemption, women mentoring women and sisterhood — there are too many depictions of women fighting women and competing with each other over men," said Stuller. "Wonder Woman does not get into 'catfights.' She believes in love, romance and partnership, but also that a woman does not need a man to survive or to be successful."

In 1987, writer/artist George Pérez rebooted "Wonder Woman," starting the series over at No. 1. Pérez delved into her Greek-mythological roots and gave her a pro-woman personality. His take is considered by many to be the definitive version of the character.

"The early Wonder Woman stories I've read were almost preachy. Diana talked at the reader — presumably female — to say that girls could be just as strong as boys and do whatever they wanted. But in later stories I remember her being distinctly subordinate to men," said Piziks. "Pérez changed this in the 1980s. So many people falsely think of feminism as women trying to show they're superior to men, instead of their equals. Diana sees men and women as complete equals, which makes her pro-woman in a society that often devalues women."

Back to her roots

Heinberg's take on Wonder Woman focuses more on the person than the icon.

"Prior to her recent relaunch, she's been portrayed as DC's archetypal warrior/goddess — equal parts judgment and mercy. If Batman's the Dark Knight and Superman's the Boy Scout, Wonder Woman has been forced into an awkward position between the two," said Heinberg. "And her purpose tends to change with the creative team. She's been an Amazon princess, a political ambassador, the Greek goddess of truth, an author and a member of the [JLA — Justice League of America]. Terry and I are trying to simplify the status quo by returning the character to her 1940s roots and making 'Wonder Woman' more of a straight-ahead superhero book."

Meltzer added, "I think [Heinberg] understands her completely — the warrior, the peacemaker, all of the contradictions, and the humanity. He makes her beautiful again — and not just physically."

Heinberg has only committed to five issues and will be replaced by novelist Jodi Picoult, with Dodson remaining as artist.

"[Wonder Woman] transformed the way female heroes could be created, perceived and the kind of stories that could be told through them," said Jimenez. "And she inspires incredible passion in some of the comic industry's top talent, without the multiplatform support characters like Batman and Superman have always had. She's survived against the odds, as many women have."

Kurt Anthony Krug is an occasional contributor to The Seattle Times: kurt513@core.com.