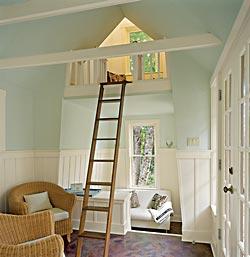 The little guesthouse has the same quiet, serene aesthetic as the main house. The ladder leads to the reading loft in the tower. (BENJAMIN BENSCHNEIDER / THE SEATTLE TIMES)
By Valerie Easton

IT WAS THE romantic notion of an aged island farmhouse that charmed Bernie Baker and Linda Ray when they moved to the Northwest 23 years ago. They picked Seattle as their destination, sight unseen, drawn here by all the water, parks and forest. Growing up on the East Coast, they were used to old houses, and, Baker says, "We weren't into all the modern conveniences." Which is good, because they bought a 1906 house on an acre of sloping farmland on Bainbridge Island.

Skip forward more than two decades, and Baker is well known for designing contemporary custom homes — one of the few local architects to be published in the "Not So Big House" books. He and Ray have finished the third and final remodel of their farmhouse and outbuildings into a small compound centered around a vegetable and flower garden. Outside, they've expanded the old pear and apple orchard down the hill, built low rock walls to retain the slope and shape the flower beds, and fashioned a sheltered patio paved with broken bits of concrete from their neighbor's torn-up sidewalk.

You enter the property through a roofed portal between garages topped off by the couple's architectural office and studio. Pass the flourishing vegetable garden, and on the left is a tiny guesthouse with a tower reading loft, inspired by the water-tower platform that originally stood on that spot. On your right is the farmhouse (expanded from 1,200 to 2,400 square feet), with a wrap-around covered deck. "We didn't want to pump it up," says Baker. The idea was to protect the scale of the house. Below are orchards with deep forest lapping at the margins of the cultivated areas.

From the moment Baker and Ray walked into the house, they loved the big windows and gallery character of the living and dining room. These elegant old aspects of the house have been retained, along with the character-rich original fir beams, floor and trim. "It took months and months of free-time work to strip it all down," says Baker of the labor involved in getting rid of the layers of black varnish to reveal the mellow fir windowsills and trim. All the aged wood is set off by sage-colored walls, wheat-colored ceiling, and a copper wall glowing behind the woodstove. Dining chairs are cherry red, and the custom-made trestle table is built of old Doug fir from a flume in Oregon, richly stained from years in the water.

The centerpiece of the old house is the expanded, modern kitchen. "The old kitchen wasn't built for two people," says Baker. "We each had our one square foot of prep space." Not a problem any longer. Copper stove hood and wall, cupboards inset with watery, blue-green handmade glass and concrete countertops so soft they look like soapstone make the kitchen a tactile experience. It's hard not to go around and touch all the materials, especially the brass hardware Baker designed himself, and the island topped with fir planks inlaid with Brazilian walnut. Wall color is slightly more azure (a paint color called Artichoke Heart from a Canadian company, C2) than in the adjacent living and dining rooms. The ceiling is a wheat color called Chai, also from C2. At the far end of the kitchen is a breakfast nook bay outlined with windows, just big enough for a little table and two chairs. Remember how in "Charlotte's Web," Wilbur asked Charlotte to write Some Pig in her web? Well, this is Some Kitchen.

Taking the old house apart and putting it back together was not simply a matter of demolishing and rebuilding. The salvaging and re-use was very detailed work, says Baker. All the exterior siding was removed and saved to re-use on the inside and outside of the remodel. Broken concrete from the old foundation was salvaged and laid as pathways around the property. Baker likens his task to putting together a complicated puzzle. "I was always asking myself, 'What is the best, simplest and cleanest way to do this?' " he says, a process that shows clearly in the hushed Shaker, or perhaps Amish, quality that prevails in this century-old farmhouse.

"Living in a house this age gets under your skin," says Baker. "I've always looked at architecture as a living thing, with respect for the past," he adds, pointing out that even his most contemporary work has classic elements.

Have Baker and Ray been tempted to build their own new house? Not really, says Baker. 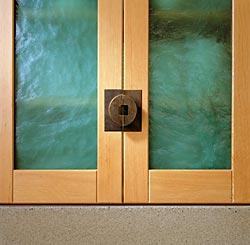 Baker designed the brass hardware in the kitchen. Its heavy metal look contrasts with the smooth fir and watery- textured handmade glass of the cabinetry. (BENJAMIN BENSCHNEIDER / THE SEATTLE TIMES) 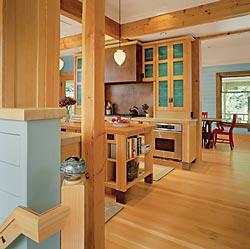 Copper, handmade glass, concrete countertops by Dog Paw, and fir cabinetry and floors distinguish the generously-scaled new kitchen. Bernie Baker describes the tulip-shaped pendant lights over the island as slightly retro yet a little bit modern. The model is 9 Wishes by Translite Sonoma, from Lighting Supply in Seattle. (BENJAMIN BENSCHNEIDER / THE SEATTLE TIMES) 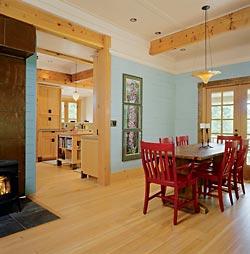 Besides the narrow, window-lined dining and living room that Baker and Ray loved at first glance, the rest of the house, like most built at the turn of the last century, was a warren of cubicle-like small rooms. Baker redesigned the flow of space, opening it up to afford views from room to room. The dining room is on the right, the woodstove and living room to the left. (BENJAMIN BENSCHNEIDER / THE SEATTLE TIMES) 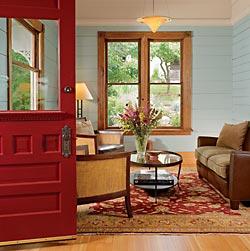 Touches of red in the rug, door paint and furniture spark all the natural wood and neutral paint colors. A hundred years ago, the view from the living room was out to the water; now the windows connect the house to the garden and woods. (BENJAMIN BENSCHNEIDER / THE SEATTLE TIMES) 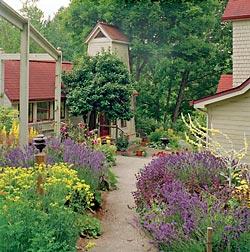 The garden is enclosed by the garage/studio, main house and guesthouse, on the left. An old shed with a water-tower platform served as inspiration for the new 360-square-foot guest house with a reading loft in the tower. (BENJAMIN BENSCHNEIDER / THE SEATTLE TIMES) 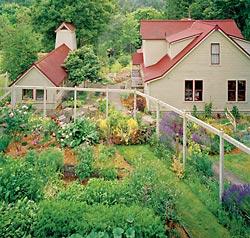 The deer-fenced vegetable garden affords a view out to the patio with a firepit that Baker calls "our Sunday-morning spot," and the remodeled farmhouse on the right. The square pattern of the porch railing repeats the grid of the multi-paned windows. (BENJAMIN BENSCHNEIDER / THE SEATTLE TIMES) 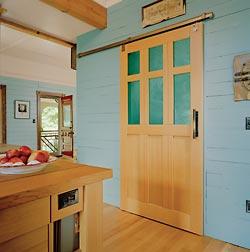 Fir beams, Chai painted ceiling and soft blue-green walls in the kitchen open to the sage-colored living room and wrap-around deck off the living/dining room. (BENJAMIN BENSCHNEIDER / THE SEATTLE TIMES)