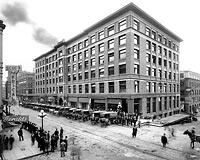 Augustine & Kyer, in the Colman Building at First Avenue and Columbia Street, may have been the last major downtown grocery. This photo was taken in 1909. (ASAHEL CURTIS / UW LIBRARIES)
By Amy Martinez and Melissa Allison
Seattle Times business reporters

Next Wednesday, downtown Seattle will get its first major grocery store in generations.

Whole Foods Market is part of a $200 million condominium project called 2200, and will save some residents the trouble of trekking to nearby Queen Anne or the Chinatown International District for groceries.

Figueroa is moving into a two-bedroom condo across from the store with Richard Vander Meer, 37. They think Whole Foods will draw people to their business — Scraps Dog Bakery, which is set to open next month at 2200.

Developers have wanted a downtown supermarket for years and say they're finally getting one because of the population boom.

Seattle's planning department counts six condominium and apartment buildings under construction in the downtown core, creating about 920 new units in the 100 blocks from Denny Way to Yesler Way and from the waterfront to Interstate 5. Twenty-one projects with more than 5,600 units are on the drawing boards.

Whole Foods, with its sushi bar and large collection of Washington wines, might be just the grocer for a city center that's looking more like the TV show "Frasier" all the time.

But some say downtown Seattle doesn't need a major grocery.

Many condo buyers are at either end of the child-rearing spectrum — just starting out or seeing their children off to college, said Leslie Williams, president of Seattle-based Williams Marketing.

When they feel like cooking something, she said, they go to a small corner grocery or Pike Place Market. And if asked what they'd like at the base of their building — a large supermarket or a mix of deli, dry cleaner and 24-hour pharmacy — they'd probably go with the mix, she said.

"There's lots of corner stores that have the basics. And honestly, most people eat out," said Williams, whose firm is promoting several condo projects downtown without plans for a grocery.

Leigh Dinnis, 32, said the lack of a major grocery was one of her main gripes after moving to downtown Seattle from Atlanta. Dinnis, a banking executive's assistant, lives with her husband at Centennial Tower Apartments at Fourth Avenue and Wall Street. They're saving to buy a house and don't expect to be shopping a lot at Whole Foods.

"If you're trying to stay on a budget, going to Whole Foods is cost-prohibitive," Dinnis said.

The 2200 project initially was to house a QFC, but the space ultimately went to Whole Foods. Now, QFC plans to build a 40,000-square-foot grocery at Lumen, a 94-unit residential project under construction on the other side of Seattle Center.

Alan J. Winningham, principal at Landstar Real Estate, which is developing Lumen, said he thinks Whole Foods at 2200 is "just the tip of the iceberg."

His prediction for downtown: big-box retailers such as Target and Best Buy.

One reason grocery stores require dense residential populations is that many operate on narrow margins, making it difficult to squeeze profits from thinly populated neighborhoods.

The formula is different for stores such as Walgreens and Bartell Drugs, which sell some grocery items. They make a profit by limiting their inventory and charging higher prices.

"People buy it because it really matters to have it right now," said Bert Hambleton, a grocery marketing consultant based in Issaquah.

Whole Foods' higher prices mean it can pay higher rent than some grocers, but probably not as high as the $30-per-square-foot and up being charged for street-level space in downtown Seattle, Hambleton said.

"I can't imagine a sales forecast for a grocery store that could justify that kind of rent," he said.

Neither Whole Foods nor developer Vulcan would disclose the new store's rent, but Walter Robb, co-president and chief operating officer for Whole Foods, said that "when a developer puts something like that together, the larger user of space gets a different deal than the smaller operator."

The last major downtown grocery that local historians can recall was Augustine & Kyer, in the Colman Building at First Avenue and Columbia Street in the early 1900s. It delivered groceries in horse-drawn carriages to homes on First Hill and elsewhere, said regional historian Paul Dorpat.

By the time supermarkets came along, people were leaving some inner-city neighborhoods for the suburbs. But now, many urban areas are growing fast. An estimated 20,470 people live in downtown Seattle, about double the number of residents in 1990, according to demographic-research firm SRC, based in Orange County, Calif.

Whole Foods expects to pull shoppers from other parts of the city. The chain also expects some people who work downtown to drop by on their way home.

The owner of Ralph's Grocery and Deli, a 6,500-square-foot store at Fourth Avenue and Virginia Street, said he is not worried about competition from Whole Foods.

For one thing, Ralph's draws customers from only about two blocks in each direction, and Whole Foods will be about six blocks away, Joe Cohen said.

For another, "we're not that type of business," he said. "When you come in here, you'll purchase two or three items. When you go down there, you do major shopping. ... You don't want to wander around a 40,000-square-foot store looking for one or two items."

A 47,000-square-foot Whole Foods Market is part of 2200, a condominium/hotel project at Westlake Avenue and Denny Way. (JOHN LOK / THE SEATTLE TIMES)

Erez Klein, on the floor, stocks wine Thursday in the kosher section of the new Whole Foods Market set to open Wednesday in downtown Seattle. (JOHN LOK / THE SEATTLE TIMES)

Opening The first condominium buyer was set to move in Thursday. Whole Foods plans to open Wednesday, followed by Pan Pacific on Nov. 14. Most other retailers will open by year's end.

Washington stores: Redmond, Bellevue and Roosevelt Square in Seattle. Plans to open at Westlake and Denny in Seattle (Wednesday), West Seattle and Interbay (dates not announced).