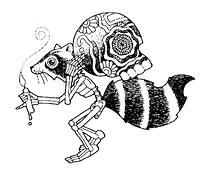 Day of the Dead has not quite reached Cinco de Mayo status in American culture — a minor Mexican holiday that is a major reason to drink beer.

El Dia de los Muertos, celebrated Nov. 1 and 2, remains a more personal observance as communities gather food, photos, fond memories and then symbolically offer them to the spirits of the deceased on altars as simple as a TV top, though sometimes Day of the Dead celebrations feature loud music and, well, beer.

I noticed this year, however, that Dia de los Muertos has been consumed by those who would have us consume.

Is this bad? Is it a portentous sign that even our beloved Halloween and Target are being overrun by Mexicanness?

Yep, it is happening, but it is not bad.

Day of the Dead imagery winding its way to the mass distribution of Target merchandise is one more indication that we, folks, are Mexicanized.

"Mexicanization" typically is code red for the transformation of America by needy hordes from the south.

As a Mexican American — my dad was born of Mexican parents in the United States, my mother's parents told stories of their own Danish heritage — I say: Haven't we always been Mexicanized? Or has my Mexican culture been Americanized? Does it matter? Traditions are branching into something new as ancient Mesoamerican ways of honoring the dead arrive at Target.

Sure, Dia de los Muertos at Target could just be about making money. "Two-thirds of Americans (an 11-percent increase over 2005) will celebrate Halloween this year by spending nearly $5 billion on everything from costumes and candy to décor," according to a Sept. 21 news release from Kmart.

But to sell, the stuff has to resonate. For hipsters in Belltown, grade schoolers in Wallingford and community centers and colleges all up and down the Puget Sound, Day of the Dead rings a bell.

The holiday gives us another spiritual space to think and reflect. The holiday helps us wound-tight Americans cope with death, maybe not fear it so much. Day of the Dead helps the displaced reconnect with the bedrock of family and friends.

El Dia de los Muertos is itself an amalgam of traditions. From tribes they conquered, Aztecs took ceremonies that honor the dead. The Spanish sought to Christianize the Aztecs' relationship with the dead. The Mexicans — a blend of the Indian and Spanish — added their own spin to rituals practiced on lands that are now the American Southwest.

Nowadays, new immigrants buy pan dulce for their altars at Albertson's instead of a neighborhood panadería back home, and cyberized Chicanos amp up Day of the Dead with their YouTube.com sensibilities.

I've been a devotee of Dia de los Muertos since I was Chicanoized during graduate school about 19 years ago. I didn't become radical, I became informed. Because of college courses and a professor's library, I finally had context in which to understand where I came from.

Finally, I could relate to my Mexican grandfather's Sunday-afternoon stories about the Mexican Revolution. Finally, I understood that it was a U.S. need for workers that pulled him all the way to Utah to help build a railroad.

Finally, I understood why in 1969 my dad wanted schools to celebrate his children's cultural heritage, not call them minorities.

Given this country's long history with, proximity to and dependence on the Mexican people, we always have been and always will be Mexicanized.

Like a native plant, Mexican is here. Why spend all that time digging, cursing, threatening, labeling, legislating unworkable laws. Work with it for one simple reason: The roots are deep.

So why not celebrate Memorial Day and Day of the Dead?

In May, we take flowers to the cemetery, snip the grass from the headstone, sit graveside — if even for five minutes — and tell stories about the loved one below. Or, we think about the why of the holiday as we drive to the trailhead, mall or work: remembering the dead.

In November, we harvest the fruits of the golden fall (OK, from the grocery store) and offer them to the spirits for the exact same reason: remembering the dead.

In this country, we have the bounty of both traditions. There's no denying either one.

Andrea Otanez, a former Seattle Times editor, is a regular contributor to Times editorial pages. She is the journalism instructor at Everett Community College. E-mail her at otaneza@gmail.com