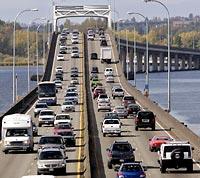 About 115,000 vehicles a day use the Highway 520 floating bridge to cross Lake Washington. (AP)
By Jim Horn and Jim MacIsaac
Special to The Times

In the central Puget Sound region, two critical parts of our highway system must be replaced soon due to safety concerns.

One project — the replacement of the aging and deteriorating Alaskan Way Viaduct — has attracted $2 billion in state funding and plenty of attention from the media and government officials.

However, the region's other crucial project — replacing the Highway 520 bridge and its approaches — hasn't received the equal funding or attention it deserves.

While 110,000 vehicles travel daily on the six-lane viaduct, 115,000 vehicles each day use the far-more-congested four-lane 520 bridge across Lake Washington. Whereas historically the bridge primarily served travel into Seattle during the morning commuter period, 55 percent of the bridge users now are outbound from Seattle in the morning.

Built in 1963, the bridge is not only unsafe and at risk of collapse in a severe earthquake or windstorm, it is the bottleneck element of the 520 corridor. This is quite evident by the huge traffic backups from each end of the bridge.

There is consensus that the bridge must be replaced soon, before a potential disaster strikes. The problem is agreeing on how to replace it.

So far, the state Department of Transportation has limited the options for a new 520 bridge to either a four-lane replacement or variations of an expanded six-lane bridge that devotes the two added lanes to buses and carpools.

We and other Eastside Transportation Association members favor a solution that DOT, unfortunately, isn't considering: a six/eight-lane hybrid alternative with the six-lane portion between Interstate 5 and Montlake on the Seattle side, plus two additional lanes on the bridge, to its first off-ramps, to relieve 520's bottleneck condition.

The central Puget Sound region is expected to grow by 1 million people over the next 25 years. This population increase and corresponding economic growth will result in greater demand on our busy highway corridors like 520.

If you think the traffic backups at each end of the bridge are bad now, just imagine how intolerable they will be in 2025 with no relief of the bridge bottleneck.

While some argue we shouldn't encourage more vehicles on our highways, it's worth noting that more than half of all transportation funding for the Puget Sound region is for transit programs like Metro and Sound Transit. However, only about 4 percent of all trips are taken by transit, with the remaining 96 percent by auto users.

The new 520 bridge should last 45 to 50 years. It would be extremely shortsighted to spend billions of dollars on a new bridge that is even more congested on the day it opens than it is today.

The DOT says we can't create an eight-lane bridge across the lake because 520's intersections with I-5 and I-405 are too congested.

However, we've used the department's own data to show that up to 40 percent of all the 520 traffic has nothing to do with the freeways at each end. This portion of traffic uses only the midsection of the 520 corridor between Montlake Boulevard Northeast and Bellevue Way Northeast. The main reason for the backups at either end of the bridge is the bottleneck in the main section of the bridge itself.

But because Seattle leaders don't want any additional general-purpose lanes on a new 520 bridge, DOT has tossed our reasonable analysis aside.

It's extremely likely that tolls will be used to repay a portion of the bridge-replacement cost. But they will apply only to the non-HOV users who will receive no benefit from the project in terms of congestion relief.

Our six/eight-lane hybrid alternative would provide some congestion relief as well as increasing toll revenue and/or reducing the toll rates. In fact, the toll under the hybrid plan would be 75 cents lower per trip! The DOT hopes that tolls will drive non-HOV users away from the corridor. But where will they go?

Gov. Christine Gregoire likely will decide the bridge's fate in a few months. We hope the governor will use wisdom and foresight in picking a replacement. Our six/eight-lane hybrid alternative may not be politically popular for many people, but it is the best solution for better accommodating future traffic needs in the 520 corridor.

Jim Horn is a former state legislator from the Eastside's 41st District who chaired the Senate Highways and Transportation Committee. Jim MacIsaac is a transportation consulting engineer with more than 40 years' experience in the region.