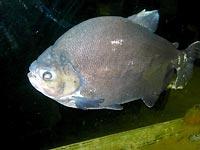 He was a Chinatown fixture, as familiar as the men who practice tai chi daily in Hing Hay Park.

For nearly two decades at Kau Kau BBQ & Seafood Restaurant, Swish the fish swam in a front-window aquarium, munching on carrot sticks, all the while knowing he would never ever be served up steamed.

But for the past couple of months customers have found only a posting in the window telling of Swish's death. His tank sprouted a leak, and one August morning workers arrived to a flooded restaurant and Swish, in his nearly depleted tank, alive but on his side.

"It was so sad. We considered him a part of the family," says Richard Chang, who runs the restaurant with wife Lynn.

The staff at Clayton Aquariums, which maintains fish tanks, had known Swish for most of his life. They nursed him for 11 days, but he died Aug. 15. Swish was 30 inches, 32 pounds and at least 31 years old.

His passing clearly left a void.

"It's like when you're a teacher and you remember certain children," says Russ Kelly, who works for Clayton Aquariums. "We took care of this fish and when you see him every two, three weeks, after so many years, you get attached."

Like many transplants, Swish had moved several times before settling down in the heart of Seattle's Chinatown International District.

One of his earliest homes was in an Enumclaw restaurant. Then, it was a tank at Seattle's Odessa Brown Children's Clinic where the children reportedly gave the silvery fish his name.

Sometime in the early 1980s, Swish resettled at the Wharf Restaurant at Fisherman's Terminal where he (his gender was never actually known) made many new friends.

"He was like a pet everywhere he went," says Peter Korch of the aquarium company. "People would walk up to the aquarium and look in and he'd swim up and look back."

And when the tank needed servicing, technicians knew sticking their hands into the water also meant scratching Swish's head. "He'd rub his body on your arms, kind of like a dog," Korch recalls.

The Wharf Restaurant, however, eventually closed and it was during an auction sale that restaurateur Wei Eng spotted Swish.

"He just fell in love with him. Maybe it was his shape," daughter Lynn Eng Chang recalls. Swish was shaped like a platter. Wai Eng moved Swish into his Kau Kau restaurant in 1987. And there he swam all these years.

Swish was a pacu, which are native to South America and with their flat, circular shape and sharp teeth are commonly known as the "vegetarian piranha." Indeed, Swish loved carrots and apples. On special occasions — Chinese New Year's, for example — the Kau Kau owners fed him grapes.

Schoolchildren always knew to look for Swish. Restaurant regulars doted on him.

"He had a personality," says Gwen Rhomes, of Renton.

Over the past weeks, people donated to a "Swish Fund." The restaurant collected about $500 to put toward a new tank.

A $5,000 freshwater aquarium has since been installed and a new pacu, believed to be about 3 years old and some 7 pounds, arrived last week.

A customer donated him when the fish outgrew his Federal Way home.

"He swam over to look at me, and that's a good sign," Korch says. "He's a good fish. He's got the potential to be Swish II."