Elizabeth Wales, left, is joined by daughter Amy and son Tom for a moment in the courtroom after the commemorative observance for the fifth anniversary of the death of Thomas Wales. An oversized image of slain federal prosecutor Thomas Wales is displayed in the background. (ALAN BERNER / THE SEATTLE TIMES)
By Steve Miletich and Mike Carter
Seattle Times staff reporters

The FBI today released a sketch of a man they want to talk to about the 2001 killing of Seattle federal prosecutor Thomas Wales, while announcing a new Web site to take tips in the investigation.

The new steps came on the fifth anniversary of Wales' killing, who was shot to death in his Queen Anne home on Oct. 11, 2001.

No one has been arrested in the slaying, although the FBI has focused on an airline pilot who had been prosecuted by Wales in a fraud case.

At a news conference today, FBI officials declined to discuss any suspect but said they are determined to obtain an indictment.

"We will not give up," said Bob Jordan, special agent in charge of the Portland FBI office. Jordan was given oversight of the investigation in June when the head of the Seattle office tried to reduce the number of agents assigned to the case.

Jordan said if Wales was killed because of his work, it would be the first time in U.S. history that a federal prosecutor had been slain in the line of duty.

In that case, Jordan added, Wales was "murdered because he was representing us" and "we are all victims in a sense."

The sketch, the officials said, is of a man seen in Wales' neighborhood weeks before the killing. Investigators have not been able to identify him.

It is not known if the man has any connection to the killing, but even eliminating him as a subject would be helpful to the investigation, said Robert Geeslin, an FBI supervisory agent overseeing a task force of five agents, two detectives and five investigative analysts.

The man's presence in the neighborhood was first reported as suspicious before Wales was killed. But it was not brought to the attention of the Wales' task force until 2004, Geeslin said. After trying unsuccessfully to identify the man, the FBI decided to make the sketch public.

Tips about the sketch can be provided to a telephone tip line at 866-322-7009. The FBI is also setting up a Web site, http://wales.fbi.gov, to provide information on the case and receive tips.

Geeslin said the FBI is continuing its search for a unique gun barrel used in the killing. The gun used to kill Wales — an Eastern European pistol called a Makarov – had been fitted with one of the barrels, ballistics experts have determined.

About 3,600 of the barrels were sold in the U.S. before Wales was killed, and the FBI has tracked half of them without finding the one used to shoot Wales, Geeslin said.

The news conference followed a memorial service at the U.S Courthouse in Seattle, where Wales' 29-year-old son, Tom, sounded a bitter note about how he and his sister, Amy, and their mother, Elizabeth, had suffered the loss of their father.

"It is a dreadful anniversary for our family," he said to more than 150 attorneys, judges, and court employees. "Time does not heal all wounds."

His father, Tom Wales said, was unconcerned over the possible danger of his job as a white-collar prosecutor. His life was "lived for the betterment of others."

"After Pops was murdered," he said, "we got letters from people he had prosecuted." All expressed condolences. "He did not believe anyone was beyond redemption."

Tom Wales, who now lives in Oxford, England, said his father was a "mentor and inspiration and probably the best friend Amy and I will ever have.

"When my conscience speaks, it does so in my father's voice," he said.

Seattle Police Chief Gil Kerlikowske recalled that he had met Wales not in his role as a federal prosecutor, but in his position as the executive director of Washington CeaseFire, a gun-control advocacy group.

"It is a terrible tragedy that he would lose his life at the end of a gun," the chief said.

Kerlikowske's voice cracked as he recalled how he had grown close to Wales' daughter, Amy, who is a founding board member of the Thomas C. Wales Foundation, which advocates and rewards citizen involvement in their communities.

"We are committed to seeing this case brought to justice," the chief said.

Also speaking was Assistant U.S. Attorney Bob Westinghouse, another white-collar crime prosecutor who worked with Wales on the fraud investigation that targeted the man who's now the prime suspect in Wales' killing. Westinghouse was placed under 24-hour protection by the U.S. Marshal's Office for months following Wales' death.

"I have not known a prosecutor who was more committed to seeking justice," Westinghouse said. "His legacy is our directive to do justice to live our lives as ethically as possible, to have fun and be good stewards to our community, and our country." 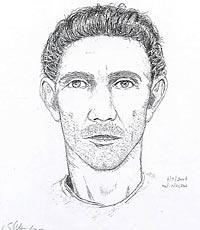 The FBI today released this sketch of a man sought for questioning in the 2001 killing of Seattle federal prosecutor Thomas Wales. He was seen in Wales' neighborhood in the weeks before the shooting, pulling a small black nylon suitcase. He is described as a white male, late 30s to early 40s, 5'7" to 5'10" with a slim build, black hair, and a chipped left front tooth. (COURTESY OF SEATTLE FBI OFFICE)