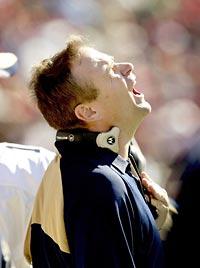 Rings have become football's symbol of success. They are rewards for a championship, reminders of postseason victories.

But a ring was the last thing Scott Linehan was chasing when he talked to John L. Smith, then coach at Idaho. See, Linehan had a job in the jewelry business. He worked for Jostens selling rings, and after two years away from football, he wanted to make the transition to coaching.

"So I painted him the worst scenario possible," said Smith, now the coach at Michigan State.

The hours would be long, the pay low. Job security would be almost an oxymoron, and his career path would end up looking like a Class AAA road map.

And that's how Linehan became an assistant coach at Idaho in 1989, the first of eight jobs in seven different states. He has worked at Idaho, his alma mater, twice, and coached under Jim Lambright at Washington and for Mike Tice in Minnesota.

Now the youngest kid from an Eastern Washington family is five games into his first head-coaching gig, and this weekend, his St. Louis Rams play the team from his home state for first place in the NFC West.

Two of his older brothers played football ahead of Scott at Idaho, and there are two nephews playing college football in Oregon. Another nephew plays at Chelan High School where Kelly — Scott's older brother — is an assistant coach.

Football is a passion, but education is really the family business. Bill, his father, was a high-school principal. Scott's older brother, Rick, played at Idaho, and is principal at Kiona-Benton High School, which is near Richland. Another older brother, Ron, coached high-school football in Oregon. He died in 2005. Ron's sons Josh and Cole now play football at Oregon State and Oregon, respectively.

The family ties to football are one reason Linehan was still being recruited by Keith Gilbertson after his playing career ended.

"I kept saying, 'You need to coach,' " said Gilbertson, now a Seahawks assistant.

"He grew up like I grew up, so it was like, 'Why aren't you coaching?' " Gilbertson said.

A coach must get his players to feel a sense of urgency without triggering signs of panic. He must temper the enthusiasm of a victory and lessen the disappointment of a loss.

Coaching is a balancing act, and even as a player Linehan showed the ability to straddle the line between fiery and overcompetitive. His pilot light never went out, but it never raged into an inferno, either.

"He's very much in control," said Gilbertson. "Never got too high and never got too low."

Gilbertson was the offensive coordinator at Idaho when Linehan enrolled as a member of coach Dennis Erickson's first recruiting class at Idaho in 1982. He came from Sunnyside, where he was ready to start at quarterback as a 10th-grader.

"Charismatic is the word I'd put out there," said Rick Stubrud, Linehan's coach at Sunnyside.

The Vandals made the NCAA Division I-AA playoffs in Linehan's final two seasons, but it wasn't just the success that was Linehan's mark. It was the way he responded to failure. The Vandals lost 24-0 to Northern Arizona in Linehan's senior season and were 4-3 and playing at Montana the next week.

"He came right back the next week and had one of the great games I've ever had a guy play," said Gilbertson, whose team won that game 38-31.

Linehan finished his college career with more than 7,000 yards passing. He signed with the Cowboys as an undrafted free agent, but his career ended because of a shoulder injury.

"He had a tremendous passion and knowledge when he played here," Erickson said. "But I knew that he always wanted to coach and he had a passion for the game, and he obviously has had great success."

Linehan coached 13 years in college. He had two stints at Idaho and spent one year at UNLV. He came to Washington as wide-receivers coach, was promoted to offensive coordinator, then went to Louisville. He was at UW five years, his longest coaching stint.

"He has a really nice balance," said Lambright, who hired Linehan at Washington. "He's not overly quiet, but he's not someone who's jumping up and down, red hot."

Minnesota basketball coach Dan Monson can't remember the opponent for certain. Maybe it was Wisconsin. Could have been Illinois.

But Monson won't forget coming home to find Linehan sitting outside his house with a cigar and a beer.

"It was pitch dark and it was really, really cold," Monson said.

They went to Idaho at the same time. Monson was a couple of years older and played one year of football before suffering a knee injury. They had a few mutual friends, and knew each other in college, but it wasn't until Linehan left Louisville to become the Minnesota Vikings' offensive coordinator in 2002 that they became good friends.

"We hadn't seen each other in 15 years or so, and I invited him over," Monson said.

Their wives became close, and so did the two coaches. They didn't share the same sport, but understood the pressures of the profession, forming a bond that has remained. Monson was one of the first people Linehan called after the Rams' victory in Green Bay last weekend.

Linehan coached three years at Minnesota, and every year the Vikings finished among the league's top four in total offense. In 2005, Linehan went to Miami to work for Dolphins coach Nick Saban for one year before the Rams hired him as head coach.

"I'm just ecstatic for him," Monson said. "When he was here, he was an assistant and didn't know if he would ever get a chance to have his own team."

And now he has that opportunity, one he has been working toward since he decided to stop selling rings 17 years ago and started chasing them.

Scott Linehan is coach of the St. Louis Rams.