New York Times columnist Frank Rich is pugnacious on the op-ed page, but he's sure a genial lunch companion.

He allowed me to carry out an incursion of his side of the table with the mission of skewering a potato on his plate, without a single harangue or accusation. Maybe it was because I had an exit strategy — and because I'm not a player in George W. Bush's administration.

The former theater critic, 57, has been called "The Butcher of the Beltway" for skewering the president and the Iraq war. Rich was in Seattle on Monday promoting his new book on those subjects, "The Greatest Story Ever Sold — The Decline and Fall of Truth from 9/11 to Katrina" (Penguin,$25.95).

We were dining in the W Hotel — I didn't ask if the irony was intentional.

Q: How did your background in theater prepare you to write about politics?

A: I think what's served me in the Bush administration is I do know theater when I see it, and this administration just puts on one show after another — and elaborate shows and cunning ones. You see something like "Mission Accomplished," which was much more complicated than just that banner — airplane scene, costumes, troops, camera angles. It's useful for seeing an administration which, in the case of this one, is so in love with staging propaganda. So a lot of what they do is very recognizable to me as theater, show business.

Q: It might be simpler just to ask what you think Bush and his people haven't lied about.

He does believe in tax cuts, and that was really the only big thing he had accomplished by the time 9/11 had happened. He believes in his own righteousness, there's no question about that. He has a very high opinion of himself.

Right after 9/11, the war he described against terrorism, which was a very plausible and realistic war in my view, was to take out the Taliban, which we did at least for a time — unfortunately, they're coming back — and go after Bin Laden, which we failed to do. But also he gave a speech saying the war on terrorism would be secret even in success at times, because it involves this metastasizing group of cells that are not connected to any state.

Why he then felt compelled to create a fictional link between that very legitimate war that he was honest about and the one [Iraq] that he ginned up and sold is tragic for the country and something history's going to wrestle with forever.

Q: What's the book do that your column doesn't?

A: I wanted to go back and, not writing with the exigencies of a weekly deadline or writing that week's take on what was happening, go back to the beginning — in fact go back before the beginning, go back to the summer of 2001 and retrace the steps, connect the dots almost, of the screenplay by which we were sold this war, against a country that did not attack us on 9/11, on fictional premises. A lot of the pieces we would learn much after the fact. And so it was fascinating to me to see how many of the clues in this whole fiction were actually hiding in plain sight even before we went to war. It was like detective work to put together the pieces, because it's incredible to me in a society as sophisticated as ours, where there's so many news sources, that we could be bamboozled on this scale.

Q: Do you think the timeline included in the book establishes more objectivity for those who'd accuse you of just singing to the Bush-bashing choir?

A: I hope so, because this book is very, very firmly rooted in fact, and a source is given for every fact. They're not silly sources. They're sources in major journalistic organizations, and government documents — among other things, the 9/11 Commission report, stuff like that. And that timeline was a fascinating exercise because in one column I just put all their statements, what they said in public, and then over a period of three or four years we've learned what they knew in private — that a major source of intelligence was a known fabricator, the documents about uranium were forged, whatever, and I think it sort of speaks for itself. And a pattern emerges, and the pattern is yes, there was a lot of bad intelligence. There was also intelligence that was right.

Q: That they apparently ignored?

A: For whatever reason. Somehow, just crazy coincidence, the bad intelligence that supported their plan to go to war was always emphasized in their public statements, and intelligence that said a lot of that was wrong or contradicted it somehow just never made it out to the public at all. And it's so consistent. And this timeline is 80 pages. I mean, it's not like two or three times, it's over and over and over again.

Q: Attitudes about Iraq must be changing if the season premiere of "Battlestar Galactica" depicts the heroes as suicide-bombing insurgents.

A: You're the third person to tell me this today! I think I'm going to write about it. I have to see it first. Things are really changing. You can see it in the late-night talk-show monologues — even the most mainstream. People realize they've been had.

Q: You say that American TV was as bad as Saddam's state-run news. What happened to journalism? Gutless? Bullied?

A: I think several things. There's no question that this administration wanted to bully what it dismissively refers to as "the reality-based community."

I think after 9/11 the journalistic community, like every other community, was in shock, a bit upset. And we're human beings too, and we witnessed a horrific, savage attack on America that produced a rallying effect among the American people, and journalists no differently from anyone else. What I think unfortunately happened was when journalists should then have recovered from that and retrieved their skepticism, they didn't.

Bullying may be a part of it, this "You're with us or you're with the terrorists" kind of mentality. Also, I think we were a little bit naïve in imagining that the president of the United States, having gotten 90 percent of support from the country — 94 percent of the country supported the war in Afghanistan — would hijack this for something else that has nothing to do with it. I don't think this could have ever been pulled off, this selling of the Iraq war, if there had not been 9/11 before it.

Q: You single out "The Daily Show," and it does seem there's more straight talk in comedy than in mainstream news.

A: What's interesting about "The Daily Show" is, it was around of course before all of this, and while it was successful, it caught on as the Iraq war geared up. Because people obviously felt they weren't getting something from the major news media, and so they discovered this guy who was presenting the news with more skepticism and authenticity in the guise of humor than was being presented by the major networks.

But it's fascinating as the tide has changed over the past year, because every network news show now uses the Jon Stewart techniques, which were novel three or four years ago, of showing Dick Cheney saying one thing and finding a clip that directly contradicts it in an appearance a year earlier.

The following questions and answers did not appear in today's edition of the newspaper.

Q: If the Bush administration does stage elaborate shows, is it good theater or bad theater?

A: It's bad theater, but you can't close it. It's good theater in this sense: Until recently, a lot of it was very effective. I chose to end my book with (hurricane) Katrina because that's when I think the scales fell from people's eyes and people pulled back the curtain and saw what the Wizard of Oz was doing.

But something like "Shock and Awe" — we were bombarding a city of 6 million people — it was presented as sort of a fireworks display for consumption of 24/7 cable and networks, and it was so effective that people didn't ask really what was going on. Bombs just mysteriously disappeared in thin air, we saw no casualties on either side, and what was the point?

The point was to put on a show that would sell us something, and what this was selling us was that this was going to be an easy slam-dunk war, painless, not a lot of cost, no blood. And it was good theater in the sense that it was effective. It was bad theater in terms of the way it turned out for the country. But it was well done in the same way that I didn't love "Phantom of the Opera," but it's well done for what it is, you know?

Q: So the scent of blood is in the air now, but you came out swinging as a critic of the administration before most people. Bearing in mind Bill Maher and the Dixie Chicks, what did you experience?

A: Nothing as bad as what happened to Bill Maher, whose show was canceled on ABC, or the Dixie Chicks, who had death threats. I'm lucky I work for a newspaper that gives columnists their head, including, by the way, conservative columnists on the paper. So I can't say I suffered anything except, you know, idiotic e-mails and hate mails, which really I'm used to. And that's not a high price to pay.

Q: I'm gathering you'd have given a big thumbs-down to ABC's "The Path to 9/11," since you make a case that the Bush people were extremely negligent in the months before the attacks.

A: Right, and there's more evidence coming out every day about it — including Bob Woodward's book. "Path to 9/11," they got everything wrong. They had Mohammed Atta leaving for the wrong airport.

It was silly. Apart from this endless debate about Clinton vs. Bush over who — both failed, there's no question about it. Both of them failed. The Bush administration wants to talk more about Clinton because their failures before 9/11 are becoming more and more documented. Many of them [have been] already — but even Woodward's book has added a couple more details, and they'll keep coming out.

While the Clinton administration for all its failures did present a plan for dealing with this, and it was said by Sandy Berger and others to be a top concern, and the Bush administration ignored it because it was Clinton's thing. "We're in power now, and we don't want his leftovers." So it was for petty reasons that had nothing to do with ideology or anything. Bush was not interested in foreign policy, and his only real plan coming in to the presidency for defense was he wanted to revive the old Reagan missile defense shield — "Star Wars" — and that was true, that was all they cared about. 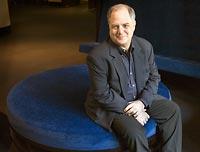 Frank Rich, New York Times columnist, was in Seattle on Monday to promote his new book that criticizes the president and the Iraq war. (TOM REESE / THE SEATTLE TIMES)